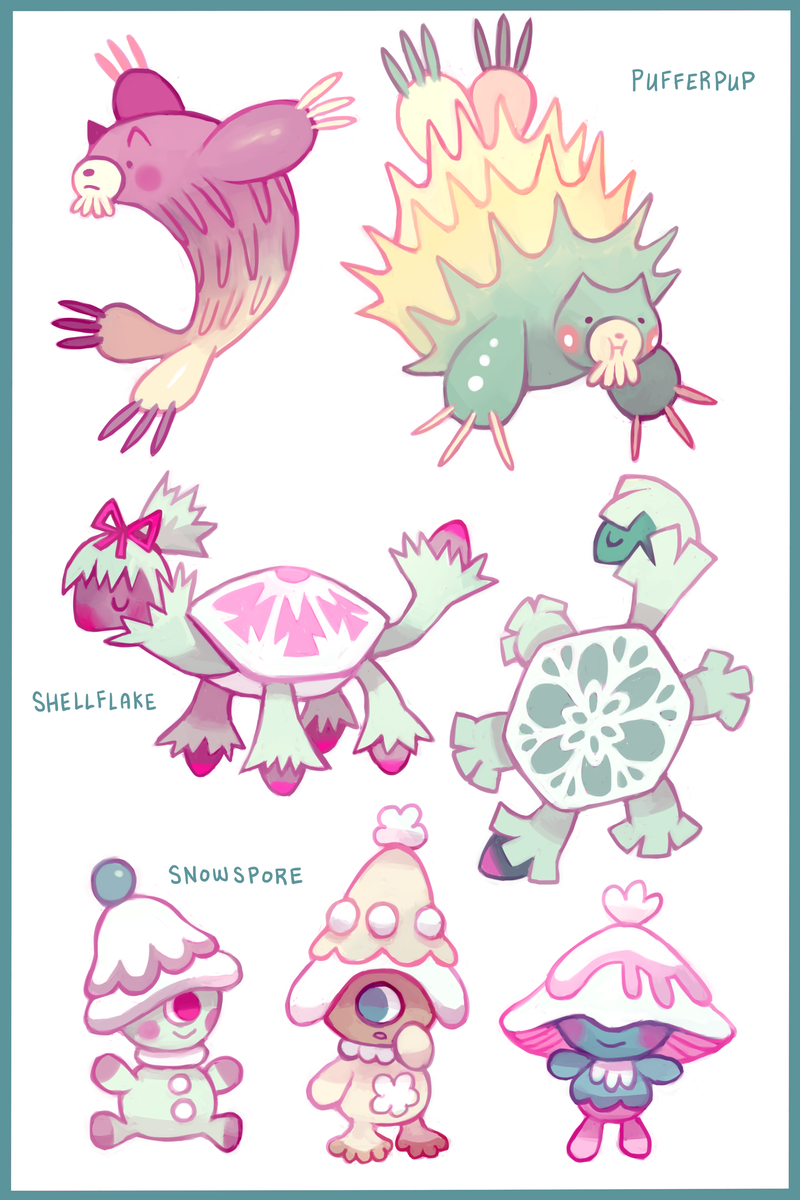 Pufferpups - Playful and goofy, pufferpups do best in a home that also has an aquatic enclosure. While not strictly required, they do love to swim! They puff up when startled, so make sure not to spook one up close! They do very good with owners who keep them engaged in learning new tasks and tricks.

Pufferpups are good for owners who don't necessarily want handle their pet a lot, but who appreciate energetic company.

Shellflakes - These docile turtles are known for their very gentle nature. They love getting their shaggy fur brushed, and love to spend time lying down next to their owner. They don't require a lot of active maintenance, as they're perfectly content to simply exist next to their owner.

This doesn't mean they don't love being showered in attention, however! It's more that they're happy with any attention shown to them. Shellflakes aren't quick-witted and it can be challenging to teach them any tricks; hearing their owner talk to them makes them happy, but they don't actually tend to realize that they're being asked to perform a task!

Breeders love to aim for different patterns on the backs of shellflakes, and it's said that their patterns are as unique as actual snowflakes.

Snowspores - Mischievous and independent, snowspores are a kind of fairy - and if you asked one, it would not at all consider itself a pet. A snowspore chooses its owner, and no snowspore will be convinced to live under any other arrangement.

To attract a snowspore, one must make a tiny house and fill it full of things that a snowspore might enjoy. (What things? Who knows! Each one is different. Will you put a tiny orange in the house, or a little lamp? Maybe a couch that's 4 inches tall?!) When the snowspore scopes out the little house and decides it might want to live there, it will go through and start adding its own items to the house. This is how you know a snowspore is hanging around you! It's likely that you're being spied on, at this stage of the friendship.

What does that entail? Well, a snowspore doesn't want to live with someone it doesn't like! So you might notice something peeping at you now and then. This is good, but don't draw attention to the fact that you've noticed it until it decides to show itself.

Once the snowspore has decided you're acceptable, it will start showing up and expressing affection for you in some way. This is different for every snowspore, and can range from running up to you and rubbing its face on your leg.... to throwing a tiny snowball at you and laughing.

At this point, you've now got a new friend! And you need to respect its boundaries. Snowspores love affection, but only on their own terms, and on no others. A good way to gauge if it's okay to touch or hold a snowspore is to blow it a kiss (or similar gesture). If it doesn't react, then it feels neutral and you should wait for it to approach you. If it blows one back or rubs its face on you, it's okay to handle. If it dodges the kiss, then it's in a grumpy mood. (Note: the correct reaction here is to look heartbroken. If you laugh, it will get very cross. Expect for a prank to be pulled on you later in the day.)

Praise is the number one way to a snowspore's heart. They love being paid attention to, and they love deciding to do something for their owner. (You can't ask them to do something; you can only loudly talk to yourself about things that you wish would be done. If the snowspore feels like it, they just might, just maybe do it.) Snowspores speak fae, but only openly talk to other fairies... if they feel like it. Displeasing a snowspore is a fast-track to getting pranked on.

Snowspores reproduce by rubbing their spores all over, causing new mushrooms to grow from nearly anything. Specialty anti-fungal charms are necessary from keeping a house a snowspore resides in from becoming a mushroom nightmare zone. These little mushrooms are not sentient until the snowspore they came from gives them a kiss. Snowspores cannot survive in warm environments, and do not like to be inside warm houses.

If you can befriend a snowspore despite all of the trials and tribulations involved, you'll find they make an irreplaceable addition to your life.