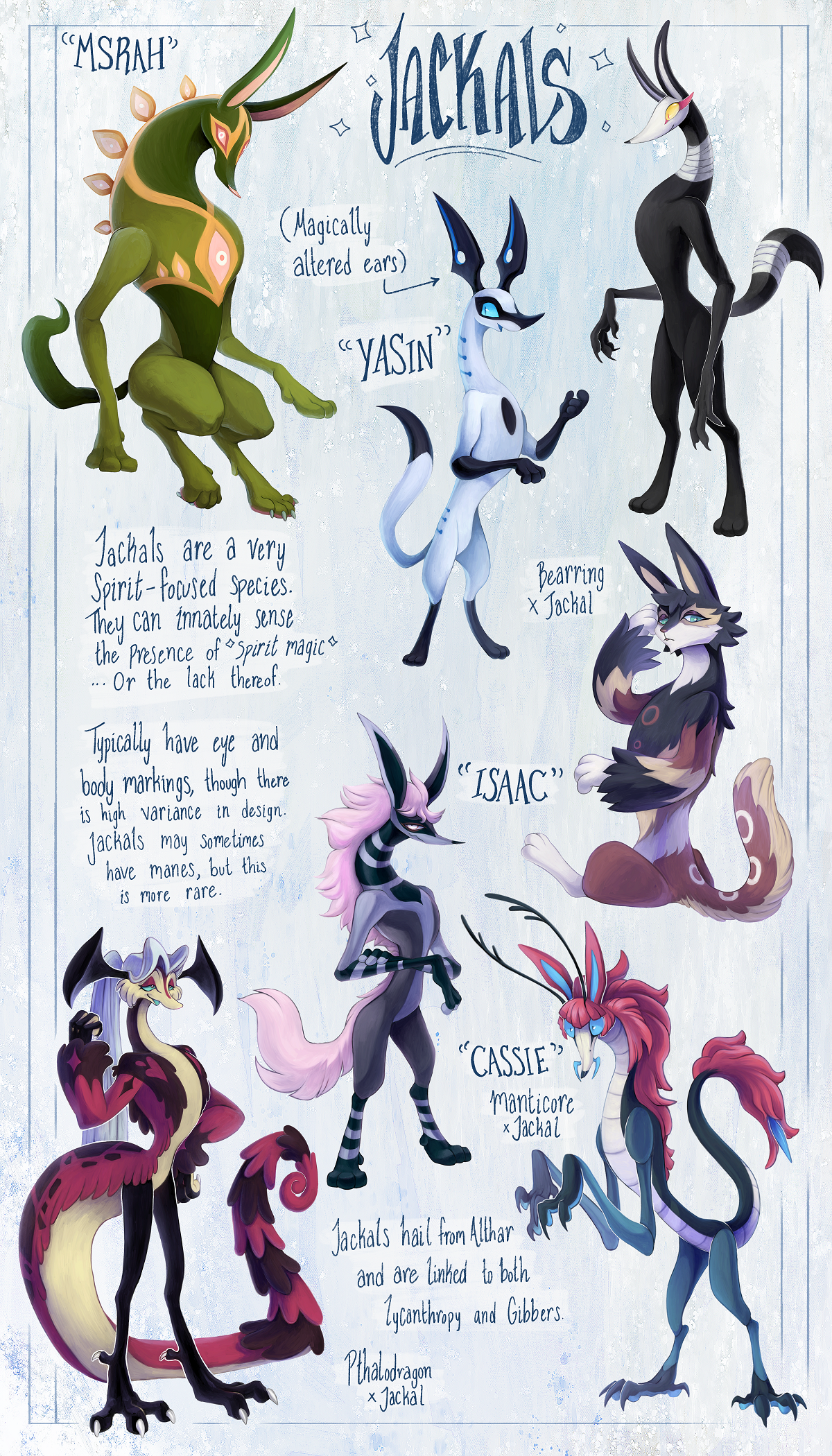 Typical Info: Jackals are bipedal, typically have long forelimbs like Bastians, and tails that are long and sleek. They tend to have markings by their eyes, and some kind of body marking, though the placement, shape, and type of body markings can vary wildly. Jackals may also have manes that travel along their head down their neck and even their back, but this is relatively rare. Hybrids tend to display the long forelimb aspect, but not always.

Ability - Selective Protection Jackals innately have a strong urge to protect that which is important to them. This object of their protection can be individuals, or more abstract concepts (or both!) For example, a Jackal may like to protect beauty and thus protect someone who they find beautiful.

The way a Jackal's protection ability manifests may vary from Jackal to Jackal. For example, some Jackals are able to sense when the focus of their care is in danger, even in some cases at great distances. The more focused or emotionally invested they are in what they protect, the stronger their ability works.

Notes: While Jackals do not necessarily have to pick an individual to Protect and can Protect abstract concepts as well, there seems to be a natural inclination in Jackals to Protect a Bastian. It is common for Bastians to have a protective Jackal friend.

Jackals are a primarily Spirit-focused species. They can sense Spirit magic innately and often their affinity is at least partially Spirit. It is currently believed that their Protection ability manifests through their Spirit magic, and thus the ability's potency is dependent on the Jackal's connection to Spirit, akin to how a Bastian's Selective Ignorance ability can manifest more strongly if the Bastian has a Spirit affinity.

There is a 'disease' believed to originate from Jackals named Gibbers. Once thought to cause meaningless gibberish in those afflicted, Gibbers is currently being given a second lookover. There are many theories currently on updating our understanding of Gibbers, ranging from those with Gibbers relaying the inner thoughts and feelings of different angels, to relaying information from separate realities entirely.

When Jackals sleep, they have a chance of connecting to Dog-based species that they can then control. This has often colloquially been recorded as cases of Lycanthropy, as the dog-based entity tends to transform physically. Dog families in differing parts of Owel have a history of magically-neutralizing their children, as this is believed to prevent Lyncanthropy risks. This, the connection between Lycanthropy cases and Jackals, is a new link that has only recently been made, and is currently not well known nor well understood.

The Jackal ability of Protection seems to meld well with other abilities in hybrids. For example, the Bearring x Jackal hybrid in the image above had an ability of Astral Protection, wherein when said hybrid was sleeping, his astral projection manifested by whoever he was protecting. A sort of invisible protector.

Cassie, the Manticore x Jackal hybrid, manifested an ability relating to... Well, if she stung you, her venom actually protected you from other venomous substances. Not that her venom is particularly easygoing or pleasant to feel, but it does protect against other types of venom that could have caused much longer lasting harm.