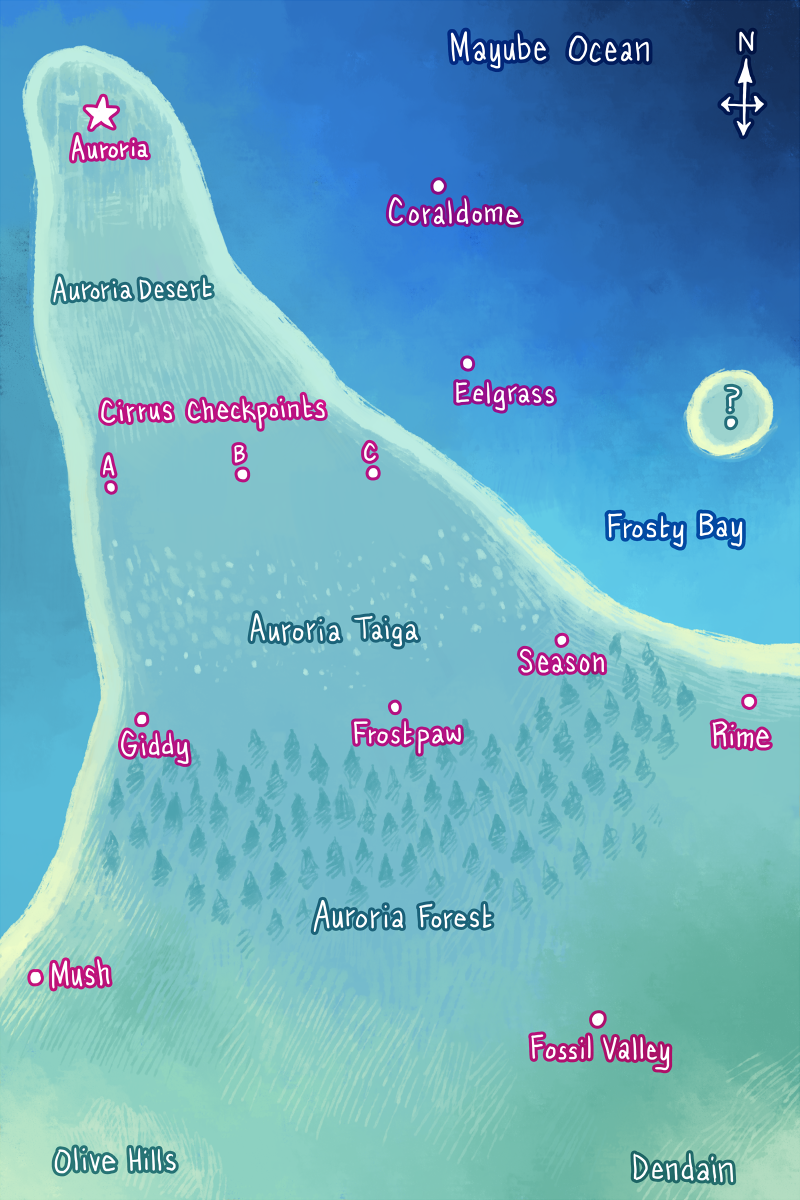 Merchant capital of Owel. Goods from every major city on Owel can be bought and sold here. But that's not enough to justify such a harsh and long journey through the Auroria Forest and Taiga, is it? Auroria is the only city to have a free-trade agreement with the entire continent of Glissod. Everything that can be bought and sold in any of Glissod's major cities can be bought and sold in Auroria, and vice-versa. Establishing a successful business in Auroria is seen as one of the highest qualifications a merchant can have, and many high-end establishments in both Owel and Glissod prefer to do business only with merchants possessing such a qualification.

If you've made it through the Auroria Forest and Taiga, the desert holds no more challenges for you. Although it's constantly freezing, the weather is almost always clear. There are numerous villages throughout the Desert, so getting lost isn't as bad here as it would be in the Taiga or Forest. Is a snowstorm or other terrible winter phenomenon does occur, the local Solar Bearrings have ways of dispersing them.

Cirrus Checkpoints A, B, C

Cirrus A, B, and C are the final city-stops on the journey to Auroria. Travelers here can find ample lodging and medical care here, as well as supplies to get them through the Auroria Desert. These cities also serve as customs checkpoints. All cargo going into Auroria is inventoried here, and the appropriate taxes are assessed. It's a common complaint among the merchant community that the inventorying and taxing is done here, far into Auroria territory and after traveling through the hellscape that is the Auroria Taiga. This is because merchants are more apt to pay their taxes without complaint rather than risk having their cargo denied, and having to trek all the way back through the Taiga

The Auroria Taiga has sent countless unprepared travelers to their demise since Auroria was founded. It's freezing and windy. It contains hostile plant and animal life. It's largely unpopulated. Food is scarce. It is imperative that all travelers stop at one of the Taiga Preparedness Cities. These cities supplies for traversing through Auroria Taiga as safely as possible: food, water, medicine, portable shelter, wildlife deterrents, heaters, etc. Do not attempt to cross the Taiga alone, or without the recommended supplies.

Mush's sister city. The road connecting the two cities is flourishing with all types of frost-loving fungi, and is colloquially known as Mushroom Road. Most of the fungi between Giddy and Mush is edible; edible in this case meaning usually not lethal. The most common and popular type of mushroom around Giddy causes euphoria and uncontrollable fits of giggling. This may sound well and good, but the effects will last until you find and eat the appropriate antidote mushroom. As in, you will giggle forever until you take the antidote. Not very fun for the casual traveler. Giddy is a Taiga-Preparedness City.

Home to the largest tribe of gnolls in Northern Owel. They're not hostile to outsiders, but, like most gnolls, they have suffered from generations of discrimination and prejudice at the hands of outsiders. As such, they have a healthy amount of suspicion for anyone traveling to or through their city. Those who earn their trust will find themselves never too far from help anywhere in the Auroria Taiga - an invaluable thing indeed, for smaller groups of travelers. In hopes of encouraging trade and tourism to their city, the Frostpaw clan is currently building a safe road from their city to Cirrus Checkpoint B. Frostpaw is a Taiga-Preparedness City.

It was going to be named "Seasons", but the residents there decided that would have been too sarcastic. Season only has one season, and that season is: very cold. Winter doesn't do it justice. The freezing wind from Frosty Bay is year-round, and with Auroria Taiga to the north and Auroria Forest to the south, you have a whole lot of unforgiving wilderness. On the bright side, Season has a healthy fishing trade from Frosty Bay, and is in the "safe belt" - the open plains area between Auroria Taiga and Auroria Forest. Traveling between Giddy, Frostpaw, and Season is very easy, even for the less-experienced. Season is a Taiga-Preparedness City.

A nearly-untouched strip of forest, home to countless types of plants and wildlife. Merchants and other travelers would do well to stick to the main roads - it's easy to become lost, and there's almost nothing in the way of search and rescue teams, here. That being said, all manner of scientists and herbalists love exploring Auroria Forest. Several cures for common ailments originated from wildlife found here, and there's estimated to be hundreds more cures just waiting to be found.

Giddy's sister city. The wet, cold climate here has created the perfect growing conditions for countless types of frost-loving fungi. It's suspected most of the fungi originated from Olive Hills and became altered by Mush's environmental magic, allowing them to thrive in freezing temperatures.

Where the harsh, dry, hot climate of Dendain meets the harsh, dry, freezing climate of Auroria. The sand dunes here are in a perpetual cycle of freezing, thawing, and being blown around by the wind. Most towns and villages here are home to all varieties of paleontologists and geologists. The ever-changing landscape in Fossil Valley frequently reveals fossils of long-extinct flora and fauna, as well as semi-precious and precious gemstones. The sand gets absolutely everywhere, so this is a rather unappealing location to the casual traveler.

Rather than being one large city, Rime is actually several small, tight-knit towns. The constant rain and wind coming off of Frosty Bay cause everything in Rime to be covered with its namesake. Every so often, - once or twice every year, actually - a foolish traveler will fail to heed the 'KEEP MOVING' warning signs posted about the towns and will become trapped by this phenomenon. They look absolutely beautiful when this happens, but it just creates a headache for the emergency rescue services who have to find and free them.

If you've eaten sushi anywhere in Owel, it most likely came from Frosty Bay. Most of the fishes and crustaceans in Frosty Bay stay near-freezing for quite some time after being removed from the water. This is most likely an effect of the abundant Ice element found within this environment. This eliminates the need for storing the seafood with bulky, heavy blocks of ice, and lowers the cost of shipping substantially. The savings are passed onto all of Owel, in the form of cheap, readily-available seafood all year-round!

The Floating City. Coraldome was built so long ago that no records of its construction are known to exist. There isn't much in the way of food or water, here - the sea around Coraldome is surprisingly barren. It depends on the seafood industry to feed its population. Aside from that, Coraldome is an extremely popular sightseeing destination. Temples carved from solid marble, winding catacombs dug into the coral, and the Coraldome itself are just a few of the notable landmarks.

The Underwater City. Aquatic species of all types live here - mostly Kelpies, Vanguards, and Noritori. Its biggest trade is its - you guessed it - eelgrass. It contains everything a vegetarian needs in terms of daily nutrition, and makes an excellent medicinal tea. It's difficult to say where the borders of Eelgrass actually are, due to the entire city being underwater. If you can't breathe underwater, don't worry. Air-breathing travelers can either rent a special diving suit, or walk around in one of the many underwater terrariums found in Eelgrass.

Gnawth territory. The volcanic activity within the region imbues the soil with an extremely rich mineral content, making the area one of the best places for plant-life. Watch where you step, though - it's not rare for lava to shoot up from one of the countless underground lava tubes in the area. Despite this, Olive Hills has a decent-sized population, and is one of the more popular stops along the way to Auroria. Olive Hills has a reputation for having some of the best burn-ward units in all of Owel.

A vast desert, deserving of its own map. Dendain is its own territory, and only the hardiest and bravest make their way through it. There's an oasis somewhere in here, home to a race of aquatic spiders. Rumor has it they guard a powerful medicine, but no one has been able to find it. Or, if they have, they haven't lived to tell the story. Also home to Honeycomb Plateau, where a highly intelligent honey-making ant species thrives. They'll trade their honey for items and trinkets, if you're polite and patient.