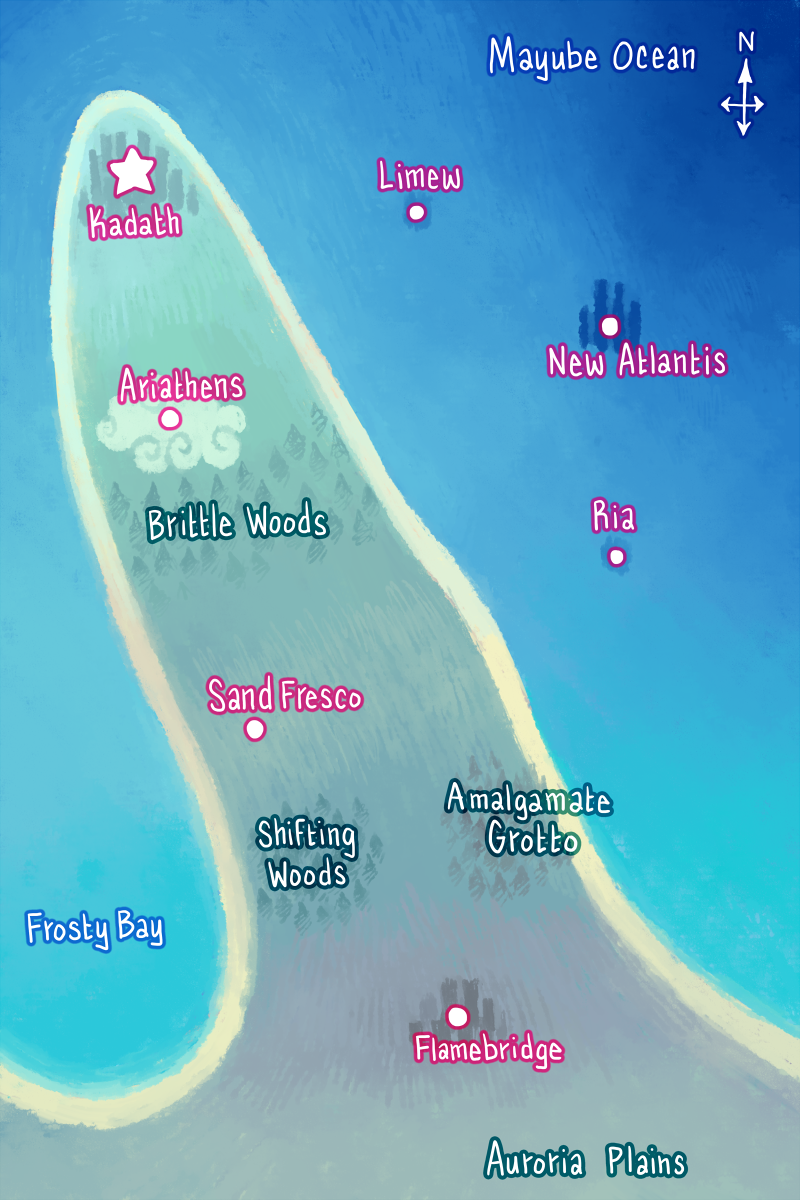 The first stop for any prospective student. How you conduct your interview here determines where you're sent. Yes, they do tell you to pick where you'd like to be sent, but that doesn't meant they send you there.

Don't look so discouraged. The admissions faculty have never sent a student to the wrong campus. The student always arrives exactly where they're told they're going.

The biologists, chemists, potion-makers, alchemists, physicists... well, anyone in field of learning that could sicken or blow up a large portion of the population to New Atlantis.

The dreamers, the thinkers, the politicians, the tinkerers, the improvers, the air-headed all go to Ariathens.

The artistically gifted, the engineers, those with their mind rooted in the ground and with a desire to shape it to their liking go to Sand Fresco.

Those who would better our ability to better ourselves, to make our lives easier, more fruitful, to solve problems we never knew we had, head to Flamebridge.

Kadath isn't for anything like that. Kadath is for those who would pursue the most dangerous knowledge, who would ask the most important question: what if?

Ever higher, ever higher. Where the rest of Kadath may be satisfied with inventing a trifling piece of innovation - such as the surfnet - and calling it a day, Ariathens seeks to take things to the next level. A higher level, if you will. Wireless surfnet? No problem. Cloud-based technology? Literally and figuratively. Aerial transportation that doesn't turn into a fireball at the first sign of a wayward spark? Almost there.

And science isn't the only thing elevated here. Ariathens is home to the greatest minds in philosophy and politics. Whether it's pointless rhetoric or endless bureaucracy or pipe-dreams of a utopian society, you'll find it in Ariathens. Most of the work and study in these areas isn't applicable to real, everyday life, but that's the price you pay for being leagues above everyone else. They'll catch up sooner or later. Maybe.

Whether your passion lies in furthering existing technology or discussing fanciful what-ifs in a vacuum and then presenting the results to the real world, Ariathens is the place for you!

What good is life without art? And what good is Kadath without Sand Fresco? According to their latest research, no good at all.

Not everyone has heard of Sand Fresco, seeing as it's underground, but those who haven't are really missing out. Anyone who's anyone started out here. Their innovative fusion of aesthetics and rabid profit-seeking are envied the world over.

Bask in luxury as automated drones emerge from their hives to fetch anything you need, even before you know you need it. Take pride in buying the latest cutting-edge designs, but be quick — the new ones come out tomorrow. Visit one of the myriad museums, resplendent with cultural artifacts liberated from every society to ever set foot on Owel. A few tourists even settle down to learn stuff. Don't forget to visit the gift shop!

If you've ever used a compact, read breaking news on a community bulletin board, or made a wish in a fountain and had it come true, you can thank Flamebridge. Or the Rugaru. But probably Flamebridge. Not that they'd brag about it or anything, unlike some other parts of Kadath.

The brightest minds of each generation study at Flamebridge, all with a common goal: to make life better in practical ways. None of that drone nonsense here. Instead, you'll have the opportunity to design safer factories, more efficient city layouts, faster thaumodynamic circuitry, and less intimidating moons. Maybe just fewer moons in general.

Flamebridge isn't all serious all the time, of course. Pranks are a common way to unwind. Last year, a particularly clever jokester turned every building in the city inside-out overnight! It was a riot. Also, there was a riot.

It's back, and better than ever! No need to worry about this one sinking to the bottom of the ocean - the engineers responsible for that mistake have come to view that whole incident as a valuable learning experience. A failure that colossal doesn't come along everyday. They consider themselves lucky to have had such a great educational opportunity, really.

Interested in potion-making? Wish to uncover the secrets of chemistry? Want to know what happens when you just mix everything up and give it a shake? You'll need a safe place to practice. New Atlantis is that place: miles away from the mainland, surrounded by countless gallons of flame-extinguishing water. Which, by the way, come in handy once or twice every month.

For endeavors a bit... smaller, New Atlantis features an underwater research city where biologies of all sorts are studied. No need to worry about a bacteria or virus escaping and wreaking havoc on the outside world - that's why Atlantis I is situated at the bottom of the ocean! The crushing depth keeps everything in, safe and secure.

When several industrial chemical refineries blow up and scatter toxic waste in every direction for miles and miles, some would feel cause for concern. Not so for Kadath's wizards and engineers, though. They know a good, honest challenge when they see it. Obstacles are meant to be overcome. Mountains are meant to be climbed. And in this case, heavy metals are meant to be viewed not as a toxic pollutant, but as potential fertilizer for trees and plant-life to come.

Some scoffed at the idea, saying it would never work, but it did.

Every tree, every bush, every plant in Amalgamate Grotto has figured out a way to incorporate the unique minerals present in the soil into their own biology. Pine trees with metal pinecones. Razor-wire kudzu. Steel-wool moss. And much, much more.

The ever-present earthquakes in this area have given it a unique topology, as well as its name. Hills that were there one day may not be there the next. Rivers may disappear and reappear a mile away. Clearings themselves may be relocated to a different part of the forest, greatly confusing sleeping travelers when they wake up.

All of this is a source of great interest to the nearby campus of Sand Fresco, who have yet to determine the cause of the earthquakes.

Something was taken out of the land, here. No one is quite sure what, exactly. No one is even sure when it happened. The trees look healthy enough, but take care not to touch them too firmly - they'll break. How they break is a mystery until it happens. Some trees will shatter, some will crumble to dust, some will crack and fall apart, some will explode.

Every scientist and wizard in Kadath is in agreeance: an experiment must have been conducted here at one point; that much is obvious. What isn't obvious is everything else. What experiment would affect the land in such a way? What would be the goal? And would the afflicted trees be a sign of success, or failure?

Although dozens of miles apart, Limew and Ria should be considered the same campus. Post-graduates and professors with particularly... particularly hugely potentially catastrophic projects come here work on them. That way, if they blow themselves and everything around them up, well, at least they're far away from everyone else.

If you're from Kadath or Ariathens, you go to Limew. Sand Fresco or Flamebridge, Ria. If you're from New Atlantis, you get to pick.