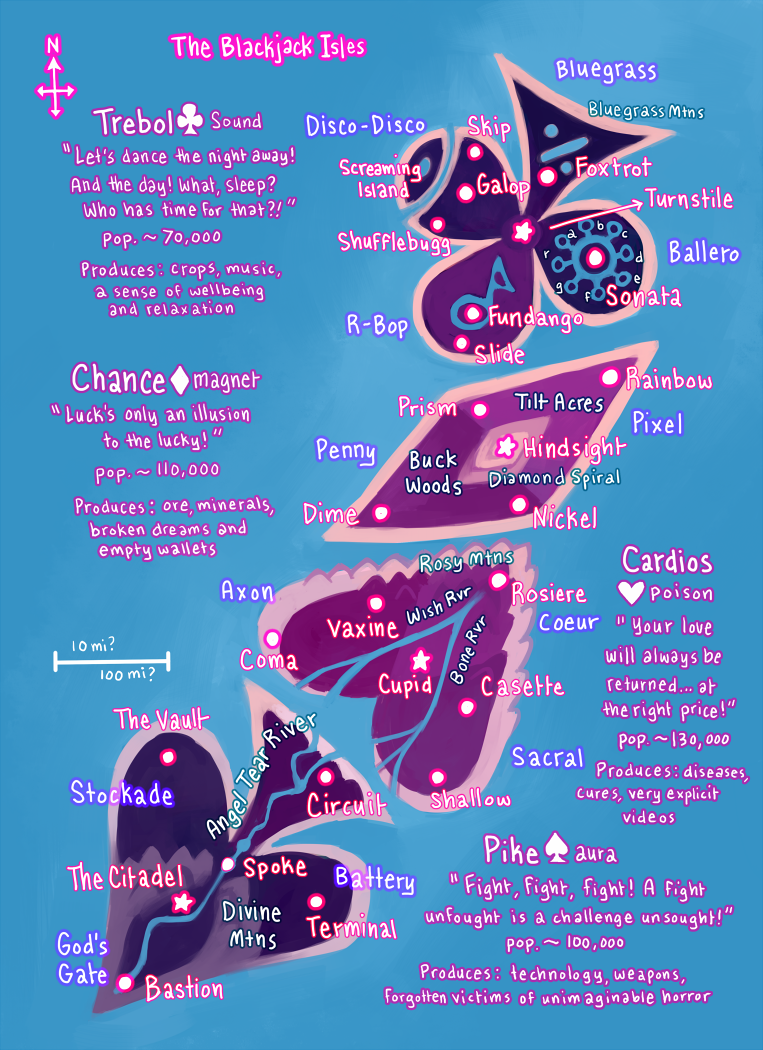 The Island of Trebol - The first of the Blackjack Isles. Aside from the demon-made lakes, Trebol's lush and vibrant environment is entirely natural. Out of all the islands, Trebol is considered to have the most easygoing and laid-back population. Probably because it's the farthest from Pike.

Turnstile - The capital of Trebol. All administrative decisions regarding the island and its people are made here, by the island's Vice Arch Magni, Andre. Visitors interested in obtaining citizenship, or information on the politics of Trebol are encouraged by Andre himself to pay him a visit.

Foxtrot - Although Trebol is famed for entertainment and exciting nightlife, Foxtrot is a quiet city, and perfect for anyone wanting a backwater kind of place to live without sacrificing any luxuries of modern living. To the north of Foxtrot is the Bluegrass Wilderness, which is responsible for supplying food crops to all four of the Blackjack Islands. Farther north are the Bluegrass Mountains, one of the best hiking and camping locations in all of Hellside.

Sonata - Imagine if a city was built solely for the purpose of housing the world's largest and longest-running musical tournament, and you'll have Sonata. Those who live in sections (or keys) A-G are for the most part extremely competitive when it comes to music, and for good reason: the winners of the Tournament of Music receive enough fame and fortune to last for decades to come. The "R" section of Sonata is mainly for visitors and for those who appreciate competitive music, but have no interest in competing themselves.

Fundango - The world's largest amusement park, with dozens of uniquely-themed areas! Also, that music note river they have? It's heated. Good luck getting in, though. Fundango has a waiting list to purchase tickets, and the wait time is usually a couple months.

Slide - Also known as Beach city! Slide's beaches give Twin Luxuries' beaches a run for their money. Miles of pristine, white-and-black-sand coastline! You can also take a boat, balloon, or airship to any city in the Blackjack Isles.

Shufflebugg, Skip, Galop - Dance, dance, dance! These cities are great for scratching that dancing itch! They're all connected to each other by an intercity rollerway, and roller skates, inline skates, bicycles and other wheeled contraptions are available for rent should you wish to travel along it. They hold a dance competition among each other every year, and the city that wins gets to call itself the Dance Master until the next competition comes around.

The Island of Chance - The second of the Blackjack Isles, and the most technologically advanced. If you're into luck, sports, games, or money (especially money), then this is your island. Most of the cities are designed around a theme.

Hindsight - The capital of Chance, and the largest city on the island. It sits atop a massive ramp named the "Diamond Spiral". Along this ramp are dozens of gemstone and magical-ore mines, as well as casino-cities, all brightly-lit and colored, all ready and willing to part any and all tourists from their money. Hindsight itself extends deep into the Diamond Spiral, and is the center of operations for all of the mines and casino-cities.

Prism - Electronic entertainment, video games, video arcades, video slot machines... if it's electronic or digital, it's most likely made here. Home to Hellside's largest (and only) video game convention, Prism is visited by thousands of demons and Topsiders every year in order to attend it. Prism is probably the least-expensive city on all of Chance to have fun in.

Rainbow - For more old-fashioned fun, games and entertainment, the city of Rainbow offers the complete carnival experience to all who visit it. From shoddy rides and unhealthy fried food, to disgruntled carnies! Most of them aren't actually disgruntled, they're just putting on a good show for you. It's what tourists expect.

Nickel - Nickel is an industrial city, focused on processing and refining all manner of raw materials, including ores and metals. The Diamond Spiral is where it gets most of its material from, but the other Blackjack Isles ship them product for processing as well. Nickel has some of the most well-known high-end jewelry shops on Owel, boasting exquisitely cut gems and intricate metalwork.

Dime - If you're not into betting or gambling on your performance, Dime has something different. Racinos! Second only to traditional gambling when it comes to throwing your money away. It's more exciting to do in Dime than anywhere else, though. That's what the demons who run the city say, anyway.

The Island of Cardios - The third of the Blackjack Islands. Tell Cardios what you want, and they'll give it to you. For a modest fee, of course. Anyone and everyone can find someone to love and be loved by on this island. Again, of course, for a modest fee.

Cupid - The capital of Cardios. Honeymoon capital of Owel. Voted the most romantic spot in the world by Cupid Monthly Magazine. Biased, sure, but probably true. Cupid is a city built for love in all its forms, free of discrimination. Matchmakers here are considered the best in the world at what they do, though their services don't come cheap.

Rosiere - The love of the physical body, athletics. The emphasis here is on healthy living, and healthy exercise. Some of the best competitive athletes in all of Hellside live and train here. It is also where the most advanced and luxurious long-distance travel balloons are designed and built. Rosiere has the purest drinking water in all the islands, as it is the source of the Wish and Bone rivers

Coma - From cosmetic procedures to life-saving surgeries, Coma has the most advanced medical facilities in Hellside. Body modification, tattoos, piercings, implants, grafts, transplants. If it involves your body and someone doing something to it, Coma specializes in it. All medical professionals in Hellside are trained and educated in Coma.

Vaxine - Vaxine performs the research necessary for Coma to stay up to date in the medical field. If you're looking to make some quick money, Vaxine has a number of programs that will pay you to be experimented on. Just be sure you know what you're getting into, as Vaxine researches not only medical cures and treatments, but the effects of poisons and harmful substances as well.

Casette - Lights, camera, action! Casette's film industry drives the economy of Cardios, and their movies are Cardios's largest and most popular export. Many hopeful individuals visit Casette for their chance to shine in the spotlight, but only few make it to stardom.

Shallow - A picture is worth a thousand words, they say. Shallow's photography industry is Cardios's second largest and most popular export. Even though it's not as popular as film, the citizens of Shallow don't feel like they're second-rate. They say that whereas film will bring a star to life, photography will capture a star's moment of beauty for eternity.

The Island of Pike - The fourth of the Blackjack Isles, and the most exciting. The most terrific. More can be written, but won't be.

The Citadel - The capital of Pike, and the command center for the entire island. Home to Baphomet, Empress of the Blackjack Isles. Every Heir and Arch Magni report the goings-on of their respective islands to her. Not open to the general public. Visitors must have a valid reason for entering, and must be accompanied by a ranked demon at all times.

Spoke - Ever wonder where the Blackjack Isles get all their power? Spoke is the answer. Most of their power-generating technology is kept a closely-guarded secret for fear of weaponization by outside parties, but it's most likely geothermal or seismic in origin. It's rumored that undercover engineers from Tesla supply Spoke with designs, but... that's just a rumor.

Circuit - They deal in developing electronics and transportation technology. Get it? Circuit? Yeah... nobody knows who came up with that pun. But it doesn't matter. All the hottest new vehicles for the public market are made in Circuit, as well as all the deadliest vehicles of warfare. Not much here for tourists, unless you're in the market to buy something.

Terminal - Terminal primarily develops and researches combat technology. Yes, it's another pun. Let's not focus on that right now, though. All the techniques and equipment utilized in the fight against the angels is made and tested here. They must be doing a good job, because Pike is still standing.

The Vault - Every military has to store their surplus, and The Vault is where Pike stores theirs. Considered to be the most secure spot in all of Owel. Criminals are stored here, as well. What kinds of criminals? Well, the kind you don't want to ever escape. The kind you can't kill, for one reason or another. Not open to the public except on very special occasions, and often for just one individual at a time.

Bastion - The first, and the last. Topsiders aren't allowed here. Not much about this place is passed on to the other cities.