◀ previous
next by date ▶ jump to References ▶ 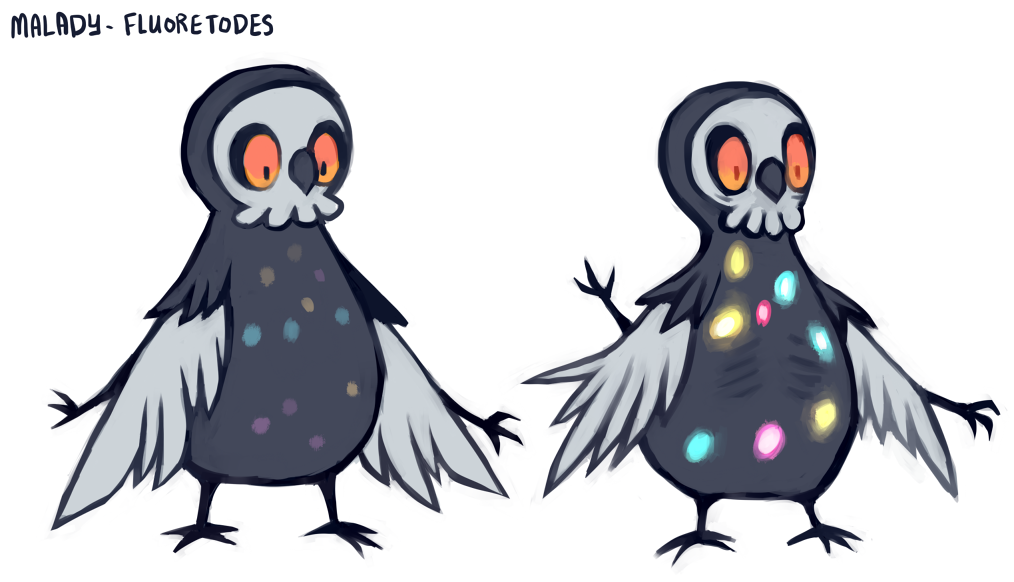 ◀ previous
next by date ▶ jump to References ▶

Early Symptoms (Stage 1) of a Fluoretode infection include

Later Symptoms (Stage 2) of a Fluoretode infection include

Advanced Symptoms (Stage 3) of a Fluoretode infection include

The presence of Fluoretodes is rather easy to diagnose in non-scaled, non-feathered individuals. As the parasites eat away at the host's body, they leave a visible bioluminescent (glowing) mark just below the surface of the host's skin. In the early stages of a Fluoretode infection, these glowing marks are difficult to see, so searching the body in total darkness is recommended.

If the host has fur, feathers or other covering over their skin, their saliva should be screened under an ultraviolet light. If their saliva reacts by glowing multiple colors, they have a Fluoretode infection.

Fluoretodes are a microscopic parasite which exist in the waters surrounding Gloam, mainly in Neon Lake. These parasites live in the mud at the bottom of Neon Lake and eat other microscopic animals, and as they do so they emit a glow which gives Neon Lake its name.

When fish (typically bottom feeders) ingest the glowing mud that contain these parasites, the parasites take up residence in that fish and will eventually cause that fish to glow brilliant colors. These fish are popular, and are called Glowfish. When an individual eats an improperly cooked Glowfish, the parasites move to that individual.

Individuals who eat improperly cooked Glowfish are at high risk of a Fluoretode infection.

Individuals who swim along the bottom of Neon Lake and ingest the glowing mud found there are at high risk of a Fluoretode infection.

Properly prepare your Glowfish before you eat it, or if dining out, make sure the establishment does not have a history of causing foodborne illness.

If swimming along the bottom of Neon Lake, wear a respirator or other mouth-covering filtration device, and abstain from eating the glowing mud.

Most individuals never have to worry about a Fluoretode infection, as restaurants near Neon Lake know about the dangers of undercooked Glowfish. And, as Neon Lake is quite deep, most individuals will never swim along the bottom. If by chance they do, the prospect of eating glowing mud is generally not an attractive one.

Fluoretode infection can be treated at any stage with Paristall, a medicine stocked at most pharmacies. Simply increase the dose to reflect the severity of infection.

As another alternative, enchanting Alchemaster Serendipitee's "Liquid Light" with an ultraviolet spell before drinking it will also cure a Fluoretode infection.

If treated in Stages 1 or 2, the feelings of fatigue and weakness will usually disappear in under a week, as will the bioluminescent spots and UV-reactive saliva.

If treated in Stage 3, only the bioluminescent spots and saliva will disappear in under a week. The fatigue, weakness, muscle atrophy and anemia were caused by the parasites eating away at the host's body as well as robbing it of vital nutrients. Muscle and nerve damage are usually present in a Stage 3 Fluoretode infection, and physical or magical therapy is necessary to fully recover.