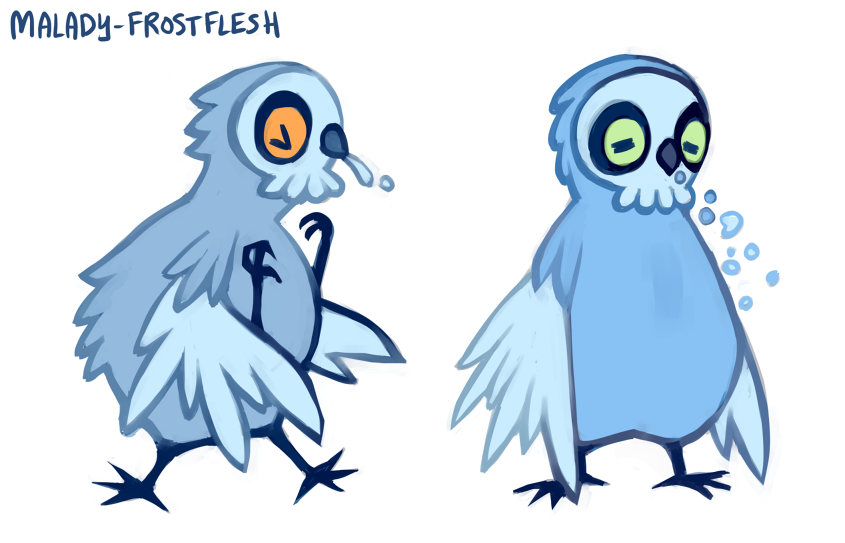 Frostflesh is easy to detect in non-furred individuals by the characteristic light blue hue always present in stage 1 of the disease. Furred individuals may either pay attention to the stiffness of their coat, or shave a small patch of fur down to the skin to check for a light blue hue. The other symptoms of stage 1 Frostflesh are easily confused with the common cold or frostbite, so always look for the blue discoloration.

In individuals where a light blue hue is natural, refer to the treatment section for stages 1 and 2, found later in this document.

Individuals traveling through the wilds of Auroria, or through places in Auroria not kept clean and sanitary are at risk of contracting Frostflesh via tainted food or water. Individuals traveling with or being near someone in stages 3 or 4 of Frostflesh are especially at risk, as stage 3 and 4 individuals constantly fill the air with airborne viral snowflakes.

In the wild or where sanitation is dubious: sanitize all surfaces with alcohol or a 2% bleach solution. Remove all entryways for vermin. Cook all food and heat all water to at least 140 degrees fahrenheit, as this temperature and anything above it kills the virus. If you suspect you may have touched a contaminated object: remove the object and incinerate, if possible. Thoroughly soak yourself in a 2% bleach solution. Rinse yourself off with safe water afterward.

If traveling with or near a stage 3 or 4 individual: wear a protective breathing mask at all times. Wear disposable, full-body coveralls with an outer layer of plastic. Wear disposable rubber gloves. Do not touch your face. After each interaction with the infected, burn all clothing, masks and gloves that were worn around the infected, then immerse yourself in a 2% bleach solution and rinse with safe water afterward.

Frostflesh is a very fragile virus, and cannot tolerate high temperatures, any amount of alcohol, bleach or elixall.

Stage 1: Barring elixall, raising the body's BAC (blood alcohol concentration) is the most effective treatment at this stage. Raising the body's BAC as high as non-lethally possible is more than enough to kill the virus. Frostflesh cannot survive where the BAC is naturally high, such as in Glee Satyrs, or where the internal body temperature is over 140 fahrenheit, such as in Blastamanders.

Stage 3: Do not imbibe alcohol. At this stage, the virus has become strong enough to freeze alcohol it as it enters the throat, rendering it useless as a remedy and turning it into a potentially lethal airway obstruction. The body's temperature must instead be raised to 140 fahrenheit, but as this usually kills the individual, the method must be performed by a highly skilled magical doctor - preferably one with a Fire affinity.

If treated in stages 1 or 2, the individual will usually have a hangover for a day, a mild chest or head cold for a week, and then be fully recovered.

If treated in stage 3, the individual will have difficulty speaking and moving their limbs and extremities for about a week, and then be fully recovered. Their Ice affinity will fade in time, and their original affinity will replace it.

If left untreated, an infected individual can possibly live for several centuries, albeit in a highly infectious, comatose state. For this reason, untreated Frostflesh is thought to be worse than death: eternal frozen sleep.

Once an individual contracts and is cured of Frostflesh, they are immune to it for life.

As usual, malady by Marl!