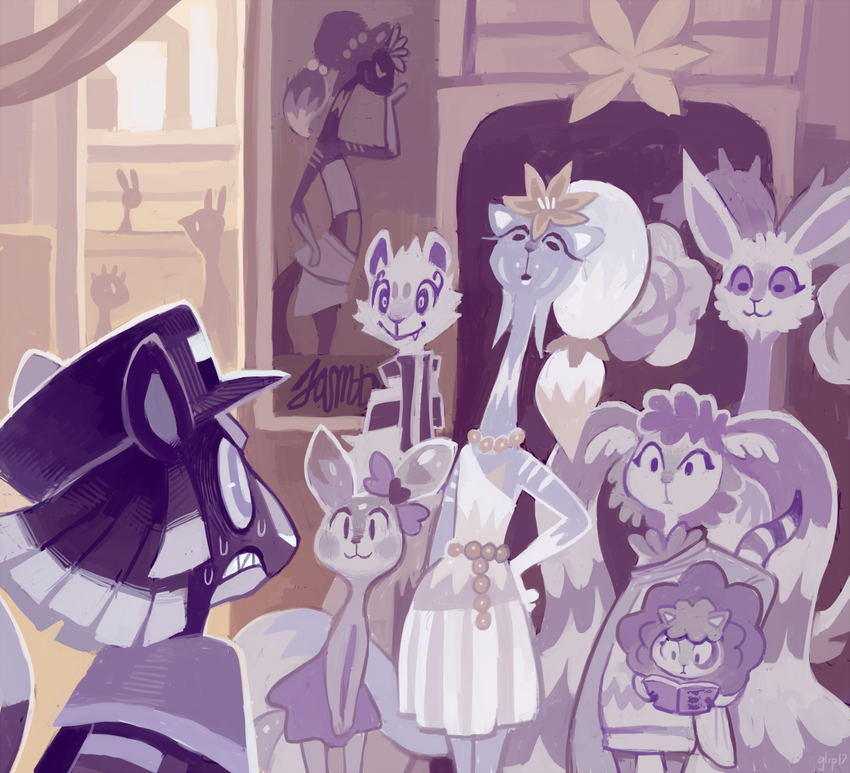 Hours later, after the war had ended, Charthur still had a slight bruise on her skin, as well as a feeling in her stomach she was currently blaming on Jasmaby’s counter-punch. She stepped through the door of her house to find Nim waiting for her, two mugs of tea sitting on the living room table.

“That’s what happens when you don’t listen to me, roomie,” Nim said, pushing one of the cups towards her. Charthur took the tea gratefully — having something to drink or nibble on gave her an excuse to talk or not talk as she pleased. “Jasmaby’s no joke. His record’s as good as yours.” Charthur took a sip and raised an eyebrow at this. How had she missed his arrival in town, then? “Don’t worry,” Nim continued, “yours is still more impressive. I mean, Jasmaby doesn’t have the handicap of running off to do something stupid whenever the mood strikes him.”

Charthur considered this. She couldn’t deny that the fireworks and the ferocity of the punch were both incredible. But having a strong punch was one thing: what she still hadn’t worked out was how he had managed to land it so accurately. She lightly touched the spot on her belly. She hadn’t picked up on any vision or predictive magic that would’ve let him pluck her out of the air so deftly.

It was… impressive. Very impressive. The need tickled the base of her brain again. She shot Nim a grin, and casually asked, “Okay, off my guard I was caught / and got hit by a damn lucky shot. / I’d like him to find / (so if you don’t mind) / tell me where he might be sought?”

Nim smiled back at her. “Hey, what are roommates for?” The smile vanished. “…if not to tell you that’s a total abuse of my power. I’m not going to spy on someone just because you’ve got a little crush going. What if they’re in the shower or something?” Charthur had several things to say to this, but while she was trying to figure out what order to go through them, Nim continued, “Anyway, if you’re looking for a fashion model who lives right next to the fashion district, maybe you should try the fashion district? Just a thought.”

The fashion district! The thought swept aside all the others struggling to get to the surface. “Yes, yes, the place to meet! / I’ll go and give this guy a greet.” Charthur plunked her tea down on the table, and turned to leave.

“Hey, Char, you’re not even going to finish y-“ Nim started, but she was already out the door. Nim considered the half-empty mug. It was worse than he had realized.

Charthur peeked around the corner again. Jasmaby was still there, still surrounded by an entourage of… whatever it is that fashion models need. He doesn’t look too busy, thought Charthur. I’ll just… go over and talk to him. It was as reasonable a thought now as it had been ten minutes ago.

I’ll just… go over and talk to him. After reviewing the plan one more time. Yes, this was a good idea. It couldn’t hurt to be prepared. There was no reason not to apply her tactical genius to this situation. So:

Step 2: Immediately follow up with the rest of her standard sonnet about how cool and awesome she is.

Everything checked out. The plan was fool-proof.

Charthur sucked in her breath, closed her eyes, and stepped out around the corner. There was no turning back now. Just go over and say it. Easy. Easy, easy, easy.

She was close now. Close enough to get a good look at Jasmaby’s face again. Her footing faltered, just a bit. Just a little bit further. There: hearing range. She opened her mouth to speak.

Jasmaby turned and looked her straight in the eye, unsmiling. The words caught in Charthur’s throat for just an instant, giving Jasmaby the opportunity to speak first: “Oh, hello. You must be Charthur.”

SHIT! The plan was in ruins. She was going to have to wing it.

“Yes… yes, I am,” she started. No second line was coming. She hunted through rhyming words — with a solid rhyme, she could fudge the rest. Quick, quick, think: Ham? No. Lamb? No. Jam? No! Yam? No, no no! Why are all these foods? She started to panic as the knot in her stomach tightened. There was no choice but to just go forward: “Charthur’s me. That’s… who I am.”

There was an awkward pause, and Charthur suddenly became acutely aware of the stares of every member of Jasmaby’s entourage. Jasmaby coughed, before saying, “Yes… well.” He tilted his head back slightly. “That little stunt you tried on the battlefield was cute. But I really don’t have time to talk now.” He waved vaguely at his entourage, as if it indicate general busyness.

Charthur stared back at him. The afternoon Dewclaw sun pricked the back of her neck. Charthur felt sick, suddenly — not merely a loss for words, but a loss for thought. With nothing more left to be said, Charthur turned and stormed away. She made sure to round a corner before biting down on her lower lip, hard.