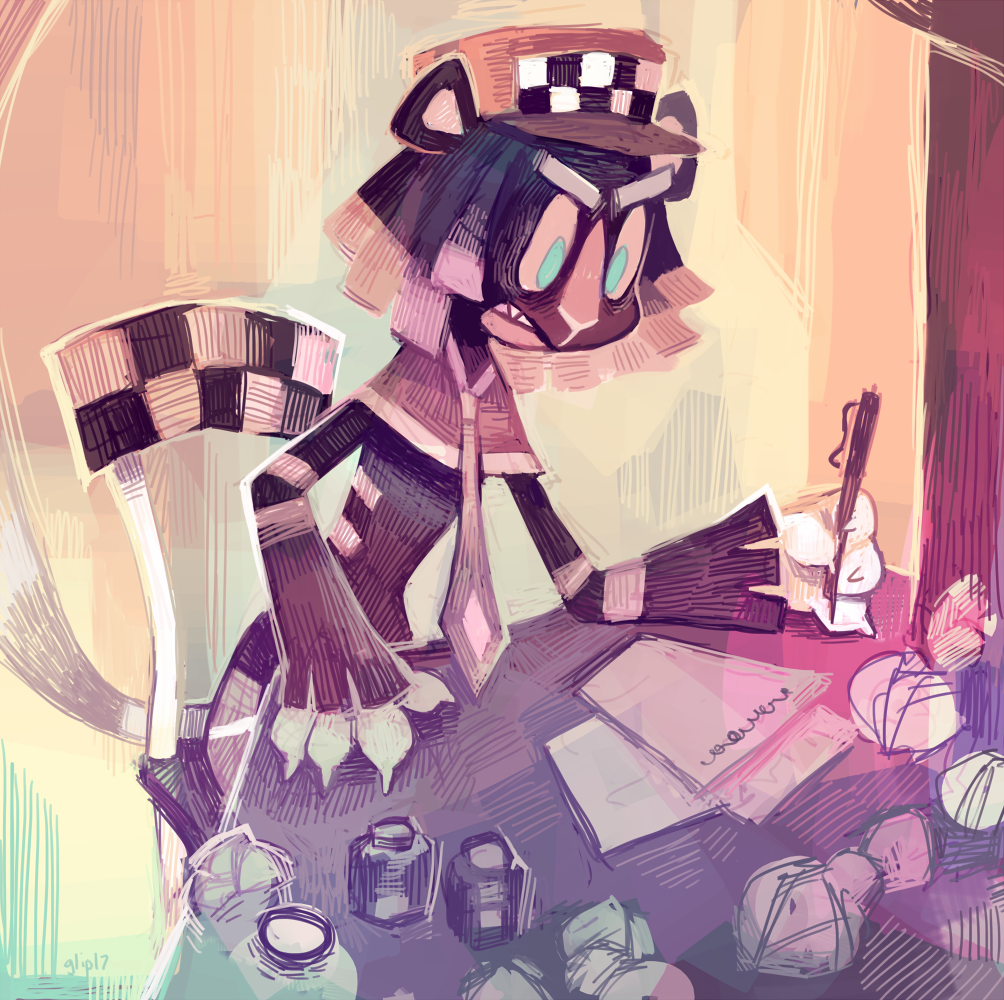 “Hey, welcome back!” Nim called out from the kitchen as Charthur returned to the house. He emerged, still drying a dish. “How’d it go?” Charthur could only stare at him. She was suddenly aware of her heavy breathing — she must have been running and not realized it. Nim cringed at her silence. “That bad, huh? Well, look, he’s new in town, I’m sure you’ll have time to…”

But Charthur wasn’t listening. Her eyes had drifted to the table. There, splayed out, were half a dozen magazines, each with Jasmaby’s face on the cover. Charthur tried to calm her breathing a bit, and looked back up at Nim.

“Oh, yeah,” he said, somewhat abashed. “I thought… you know, he’s been interviewed a bunch of times, and since you’re all about getting into the mind of the enemy, that…”

Charthur looked back down at the magazines. The covers showed Jasmaby alright. And yet, they didn’t. In the photographs, Jasmaby looked… gentle. Sweet. Delicate. The last one in particular caught Charthur’s eye. He had a slightly pained expression on his face. He looked… vulnerable.

A heat blossomed in Charthur’s gut, the memory of Jasmaby’s burning punch suddenly vivid and present. Charthur tried to find a word to express her feelings about these photographs, but each candidate skittered away right as she tried to grasp it.

Carefully avoiding returning Nim’s gaze, she swept the magazines into her arms and started towards her room. She paused and, still looking down, shot Nim a thumbs-up following a little inverted arc — their sign for “thanks” — then retreated into her quarters.

By herself at last, Charthur breathed out. The tension she had been carrying relaxed, just a bit, and she let herself think again.

Stupid. Stupid, idiot, stupid dumb idiot making a goddamn stupid fool of your stupid idiot, stop it, stop it, she thought. Alright, so it had gone about as badly as could be expected. Now Jasmaby thought she was a moron and her roommate thought she actually had a crush, of all things. But this wasn’t unsalvageable.

Charthur glanced over at her writing desk, and felt an involuntary smile appear on her face. What the universe had denied Charthur in her ability to speak well, it had made up by giving her a gift for writing. Face-to-face, every sentence felt like a puzzle, and despite all the tricks and shortcuts she had mastered, talking still felt like a draining task with little reward.

Writing, though — writing was different. Writing was magical. Rather than hiding from her, the words jumped out, ready to be used. They lined up for her perusal. Thoughts flowed directly into ink, letting her craft whatever she pleased — something to make him laugh, or cry, or whatever she felt like invoking. The prospect made her giddy.

“A poem that’s slick and cool and calm,” said Charthur, suddenly feeling like herself again. “I’ll soon have him in my palm.” She plucked her pen from its stand and placed a fresh piece of paper on the desk. This was going to be easy.

Why was this so hard.

Charthur glanced at the clock again. It was a minute later from when she had last checked it, and three hours since she had started. She closed her eyes. Anxiously, she picked up the piece of paper and brought it to her face. Was it really as bad as she thought? It couldn’t be. There was no way it could be. That was impossible. But there was only one way to find out: she opened her eyes again.

She threw herself back in her chair, angry and embarrassed with herself. This had never happened before. She didn’t know what to make of it. This was her sanctuary — mind and pen, tiger and paper — her retreat, her place in the world. That marketplace encounter had been humiliating, but Charthur was used to verbal flubs. And getting blown away on the battlefield wasn’t ideal, but every tiger knows you don’t win… every…

Charthur stopped. The memory of getting sniped out of the air was back, but… before that. Go back. Right when she first saw him. That moment.

She closed her eyes. Nervously, not daring to breathe, she picked up a pencil, and brought it to —

A hammering at her bedroom door caused her to reflexively throw her pencil across the room. The irrational urge to hide the blank paper jumped into her mind. “What? What?” she failed to avoid screaming, embarrassed by her own embarrassment. “The door is shut!”

“Are you still in there??” shouted Nim from the other side. “It’s been hours! Your students are waiting for you!”

Shit! Practice. How could she have forgotten? Before the obvious answer could come to mind, Charthur started frantically changing into her training gear, managing to put each piece on backwards at least once. “A small delay! Take no care!” she shouted back. “Go ahead! I’ll soon be there!” She struggled with her belt a bit, her hands suddenly in no mood to remember how to tie it and her brain completely out of practice, when the feelings of a minute earlier came back.

Shit! Poem! Okay. Her students were waiting. She was already late. But…

Charthur lunged at the paper, scribbling down her thoughts as fast as they came. There was no time to review them — she’d have to take a look at what she wrote later. She reached the end of the page and, reluctantly, dropped the pencil on the desk. Halfway out the door, she turned, desperate to see what had been written, but sprinted off instead.

Charthur swept into her room. It had been a good practice — some of her students had finally started to show signs of adapting her teachings into their own styles — but her heart hadn’t been in it. She shucked off her training gear, her eyes on her writing desk on the other side of the room the entire time. She approached it, surprising herself with her own trepidation.

She sat down, picked up the poem, and immediately found herself covering her face with her other hand. What is this? she thought. Did I write this?

She sighed, and read the poem a few more times. It wasn’t what she had meant to write. It wasn’t entirely terrible — there were a few neat little phrases, one or two notes of actual emotion — but compared to her usual work, it was rough and awkward. There was a sliver of herself in the poem, but nothing more.

She grimaced and slid the paper to the other side of her desk. Well. Okay. First draft. That’s fine. All she had to do was avoid Jasmaby while she reworked it. No big deal. She had time. She’d make it work.