◀ previous by date ◀ jump to Floraverse: Eastar Islands
next ▶ 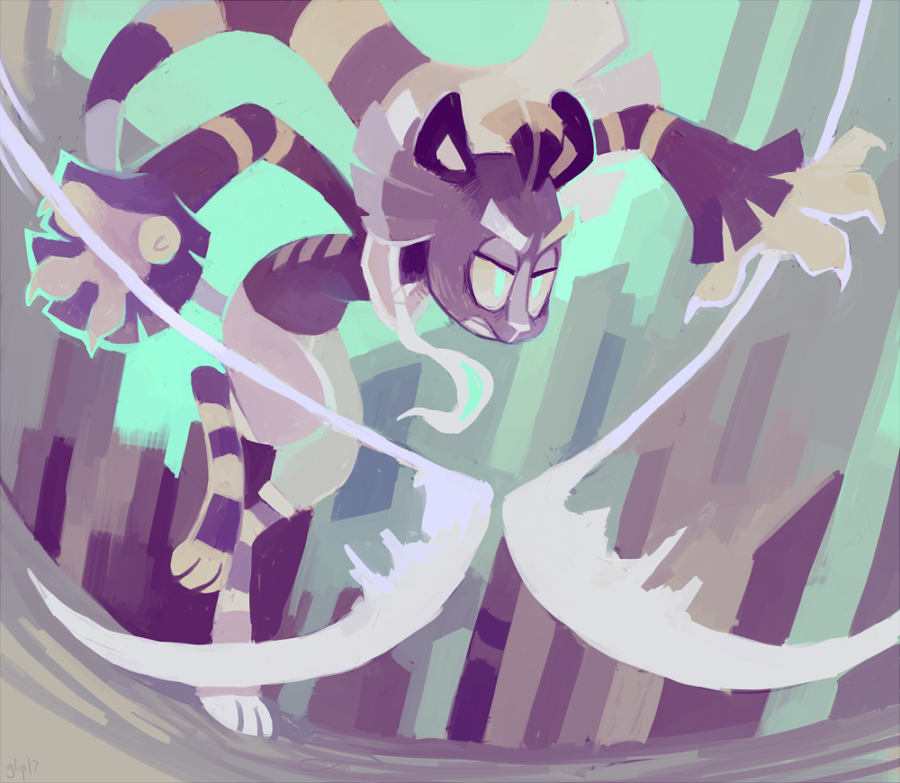 ◀ previous by date ◀ jump to Floraverse: Eastar Islands
next ▶

HEY ALL! It's the start of Opa-opa's story, "Tangle, Tussle, Tiger"!

This story has several installments. Also it's really, really good. (Trust me.)

I remember when he first wrote it something like a year ago, I was like, "Oh, this is so long.. like 45 pages long.. where am I going to find the time to read this" and then before I knew it, 2 hours had passed and I was upset the story had ended. Also, it's what led me to go "Let's work on the Turf Tiger game together!" - because I knew he'd be able to do a good job writing them!

Charthur tugged her sickle out of Bastion’s chest and continued her way down the alley. He had been retreating and, tragically for him, ran into her coming the other way — in a tight space like this, he hadn’t lasted even five seconds. It was the third time in a row that she had caught him at close-quarters and simply cut him down in one stroke. Charthur made a note to catch up with him afterwards and tease him about it; he was the kind of relaxed, friendly guy who knew how to laugh at himself. For now, though, there was a war to win.

Stepping into the open air, it was no surprise Bastion had been in such a rush to retreat. Several of her more powerful teammates were sweeping through, driving a few unlucky stragglers from the other team into a corner. And there, already making his way over to her, was a tiger dressed in a somewhat breezy, beige linen outfit, a few blue stripes peeking out around the wrists and ankles.

Nim. Perfect. Just who she had been looking for. This war, like so many before it, seemed to be unfolding smoothly. As she got close to him, Charthur called out: “There you are, I need your eyes / Where best to take them by surprise?”

Nim nodded to her. His eyes unfocused briefly, his sight leaving him for a moment. His pupils made several minute adjustments, tracking bodies unseen, before he snapped back to reality. While not a particular strong Turf Tiger, his “I, In The Sky” ability made him a major asset to any team organized enough to take advantage of his recon. “Well,” he started, “we’ve completely lost the East Plaza, but it looks like if you head to the Central Square now, you’ll be able to cut off…”

Charthur grabbed Nim’s shoulder, stopping him there. It was unlike him to make such a blatant mistake: “I’m sorry, what? We’re lost where? / Not the plaza, I came from there!”

Nim shook his head. “I saw what I saw, Char. Jasmaby must’ve shown up just after you left, because he’s got it locked down. But look, they’re vulnerable from the Central Square, the two of us could round up…”, but Charthur shook her head to interrupt. Her grip on her sickle tightened.

Nim shot her a look of disdain, one common enough that Charthur had learned to tune it out completely. “Who’s Jas… Charthur, have you ever looked at a magazine? He’s only one of the biggest fashion celebs this side of the continent! He’s serious business! Honestly. He moved into that big house on the North End a week ago? You didn’t hear about that?”

Charthur waved a paw dismissively. Yes, it was a little unlike her to miss the arrival of a new tiger into the community, and yes, it was a bit sloppy of her to not already have the lowdown on their powers. Still, that only typically mattered when deploying others; she could give this new guy a traditional Turf Tiger greeting by simply smacking him down herself.

“His special power: Can wear a shirt?” She grinned, and lightly tossed an ice sickle to herself. “Time to bring a world of hurt.”

With that, she charged back the way she came, ignoring Nim’s protests as they faded into the distance. Nim had a pretty keen sense of tactics, having gotten to watch war after war unfold from his aerial perspective. Sadly, spending more time in the air than on the ground had diluted his instinct. While his sense of tactics and match-ups were on par with hers, he had distanced himself from the innate chaos at the heart of every battle.

Charthur saw it this way: Always doing what was “optimal” or even “made sense” was the quickest way to become predictable. Predictability was a death sentence. Worse, it was boring; which is why Charthur made a point of showing up anywhere she had no reason to be and going after any fool who thought you could win a war through reason alone.

The narrow alley connecting the two venues opened up onto the East Plaza. A few minutes ago, Vince and Boto had been working to cut off every entrance to the area; now, Charthur found them cowering behind their combined wall of stone and roots, desperately holding out against…

There was a swirl of flame. In the center, a turf tiger, tall and graceful. His comfortable stance and fine clothing contrasted with the plumes of fire that accentuated his movements. One paw rested casually at his hip, while the other delicately traced a path through the air, leaving a glowing trail behind it. Sparks leapt from his fingers into the air, where they hung. Spinning, flaring, they grew into compact balls of flame before slamming against the diminishing barricade. The tiger’s face betrayed no signs of concentration, or even effort, at the conjuration of this assault; he seemed to be summoning this miniature meteor swarm incidentally, the way one might drum their fingers on a table.

Charthur found herself hesitating; extremely unusual for her, regardless of the battlefield situation. Something inside tried to warn her about any tiger powerful enough to lock down two of the most defense-oriented turf tigers in Dewclaw, but these thoughts were unable to find purchase. There was instead, Charthur realized, a building need growing inside.

It started in her gut and clawed its way up her spine, where it lodged itself in the root of her brain, well underneath Reason’s ability to control or constrict it. It was an impulse that flashed through her neurons and traveled down into her limbs, creating a delicious, nervous anticipation.

Suddenly, she realized: she truly, badly needed to kick this guy’s ass.

She launched into a sprint across the open plaza, eyes focused on her prey. Jasmaby, caught up in tearing through the magical wall, didn’t hear the gentle footfalls approaching — a mistake he would quickly learn not to make twice.

Charthur launched into the air, twin sickles raised victoriously above her head, nothing between her and her prey except for Jasmaby’s fist, a cannonball of burning steel, lodged in her stomach.

Charthur dropped out of air and hit the ground, slamming into it kneecaps-first, and crumpled around her gut. It had been so fast. The memories were disjointed: One image, his back to her; the next image, him whipping around and striking with a lunging punch like a bolt of lightning. How?

She tried desperately to get back to her feet, but the pain exploding at her center forced her back down before even getting a foot planted. Her vision blurring, Charthur forced herself to tilt her head back, just enough to glance upward at the towering figure at whose feet she knelt. He looked down at her — face still placid, brow raising slightly as the two made eye contact.

Jasmaby. That was the entire thought, one word. But the word still proved to be too heavy for her head, bringing it crashing to the dirt. It was a good word to pass out to.