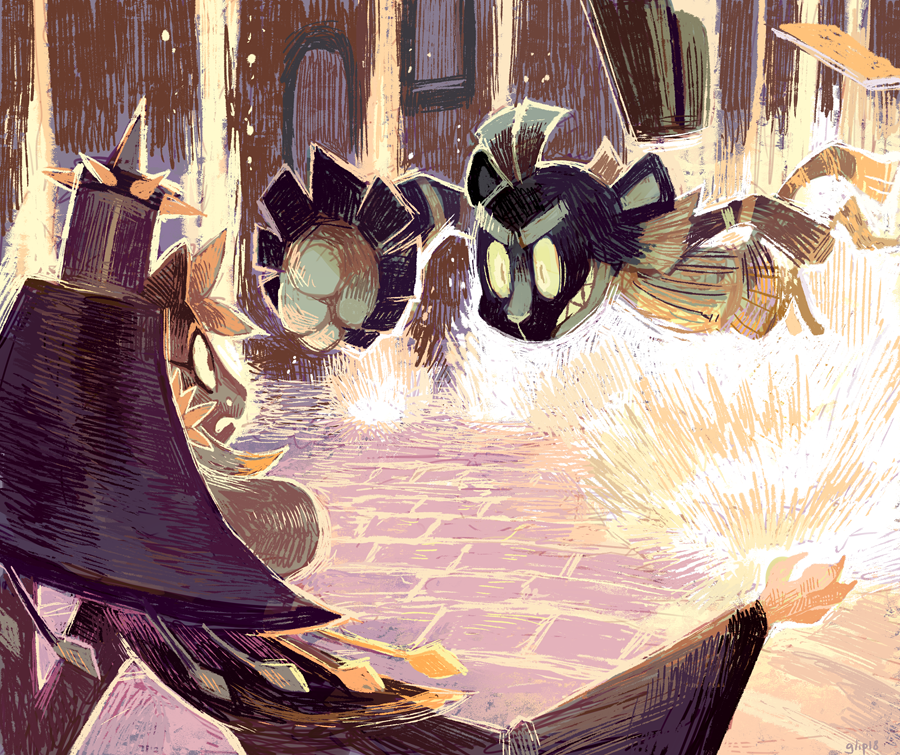 Part 8 of the story by Opa-opa!

"Finally," Jasmaby said. "Kept me waiting long enough." He gestured dismissively at Neon, not bothering to turn. "I'm afraid your scapegoat won't be bringing you any reinfarcements. Are you done running, then?"

Charthur stuck out her foot, pointing at the injury, plainly visible even from a distance. "A wounded leg, an injured knee," she chimed.

Jasmaby shifted his balance. "No sickles, though? You're going to do this bare-handed?" Not turning her eyes from the scene, Neon heard the air sizzle around her as new fireballs formed and began circling overhead.

Charthur shrugged her shoulders, and held open two empty palms. "No more power, as you can see."

"Oh dear." Jasmaby brought a paw to his mouth. "How disfortunate for you. You're just going to hand yourself over to me, then?" A wave of heat passed over Neon's back, a fireball passing by low above her.

Charthur shrugged again, this time dramatically, raising her paws and lowering her head. "Not the outcome I wanted to choose." When she looked up, she had her familiar grin plastered on her face. "But I'm done with being afraid to lose."

Jasmaby gave a small, curious, hm. "I must say," he said slowly, "I do find this conclosure... disappoints me." He reached out with one paw, beckoning Charthur forward. "So be it. Care to make the first move? We both know how that ends."

Charthur responded with a thumbs-up. She dropped into a crouch, then started jogging directly forward, moving as fast as she could on her bad leg. She was going to walk straight into the trap, Neon realized with terror.

It was too much. She couldn't bear to watch it end, not like this. She pressed herself up as high as she could managed. "Charthur!" she yelled in warning, already too late...

Jasmaby hunched over all at once, claws extending, before pulling upward, as if uprooting something invisible.

The ground directly underneath Charthur exploded, a torrent of rock and fire shooting into the sky.

...not directly underneath, actually. For at the moment that Jasmaby had hunched over, Charthur had added a tiny extra hop to her final step, carrying her just slightly ahead of where she was supposed to be. This left the epicenter of the eruption just a tiny bit behind her. It should have consumed her — instead, as the street below her turned to flame, she had braced, angling her feet. As the fireball burst up through the ground, it propelled her forward, rocketing her towards her prey.

Jasmaby didn't have time to so much as blink before the aerial punch landed with incredible force, driving him backwards. He managed to backpedal for a few steps before toppling over, hitting the earth near Neon with a thud. Neon instinctively pressed herself up and scooted a few feet away, acting on instinct, but it was obvious there was no getting up from Charthur's attack.

Charthur, a few tiny flames still burning on her clothing, slammed her fists into her hips. "Ha! Aha ha ha ha!" she laughed maniacally. She pumped her fist and pointed at Jasmaby's fallen form. "You disappointed now, matchstick?" With that, she turned to no one in particular and threw her fists in the air, arching her back. "Woo!! Never underestimate killer Charthur, you hear? Never!!" she screamed until her voice echoed off the plaza walls. "Woo!!"

Her showboating for the imaginary crowd complete, Charthur adopted a confident, drunk strut, marching over to where the stripegoat lay via a weaving path, each step looking as if she might somehow miss the ground with it. She thrust a triumphant thumb into her chest and asked, unprompted, "How did I accomplish such a feat?" She lifted one foot, revealing a sole caked in ice and scorched dirt. As she wiggled her toes, she explained, "I had just enough ice to protect my feet."

At this, Charthur froze, still balancing on one foot. Neon cocked an eyebrow. Charthur sheepishly lowered her foot, patting out a few of the larger fires on her clothing, before regrouping emotionally. She crossed her arms and declared, "I just exploded myself to victory, damnit. You can take your poetic critique and cram it."

Neon sighed. She pressed herself up, trying to get her legs underneath her, but a harsh hurt flared up, bringing her back to the ground.

Charthur crouched down next to Neon, briefly looking like she might simply topple over face-first. She placed a comforting hand on Neon's back (or perhaps she was simply steadying herself), and asked, "And how about you? I'm sure we've won. Can you come, or are you done?"

Neon made another exploratory effort to roll onto her side — but a sharp ache in her ribs once again brought her crashing back down. "...looks like this is the end of the line for me, Char," she mumbled.

But Charthur's attention was now on something in the distance. Neon turned to look, groaning slightly at the strain, and spotted Shizu and Sunny in the next plaza, waving happily. Charthur laughed cheerfully and returned the wave, before turning back to Neon. "An open path, an easy score! I don't need you anymore."

Neon let her head drop back onto the dirt. She intoned, not caring to disguise what she felt, "Just what I wanted to hear."

Charthur didn't seem to notice. She got back to her feet, brushing herself off and pinching out the last few pinpricks of fire. "With that," Charthur started, then interrupted herself to say, "Wait, hold up." She took a few steps back towards Jasmaby, who was groaning slightly but otherwise motionless on his back.

Charthur clasped her hand together, and concentrated. "Come on, come on," she whispered. "Please say I have just enough to..." She looked delighted as she separated her hands, a sphere of ice forming between them. She rotated one hand to grip the sphere more tightly, then twisted, a crisp crack as it shattered in two. The shell gave way, revealing a delicate ice sculpture of a pricklehog inside.

Charthur carefully extracted the tiny statue, twisting around to show it to Neon. "I've been practicing," she explained. Dropping to a crouch, she gently set the little figurine on Jasmaby's chest. "Cool day. Should last until he wakes up, no problem," she said to herself as she stood back up. She looked immensely satisfied by the little gift perched peacefully on the defeated model.

Charthur snorted. "He doesn't. He hates them." She turned to grin her widest grin at Neon. "That's what makes it funny!"

Neon watched as Charthur padded away, still wobbling, as Shizu and Sunny rushed over to collect her. Sunny scooped her up, holding her to the sky for a second, before depositing Charthur on their shoulders. As Neon listened to their receding woops of celebration, watched the flag held over Charthur's head disappear into the distance, she felt herself sink further into the ground.

Gently, Chip descended from above and settled into the space between Neon's shoulder blades, soothing vibrations emanating from its smooth shell. Neon released a tightly-held sigh, and closed her eyes. Nothing more to be done.