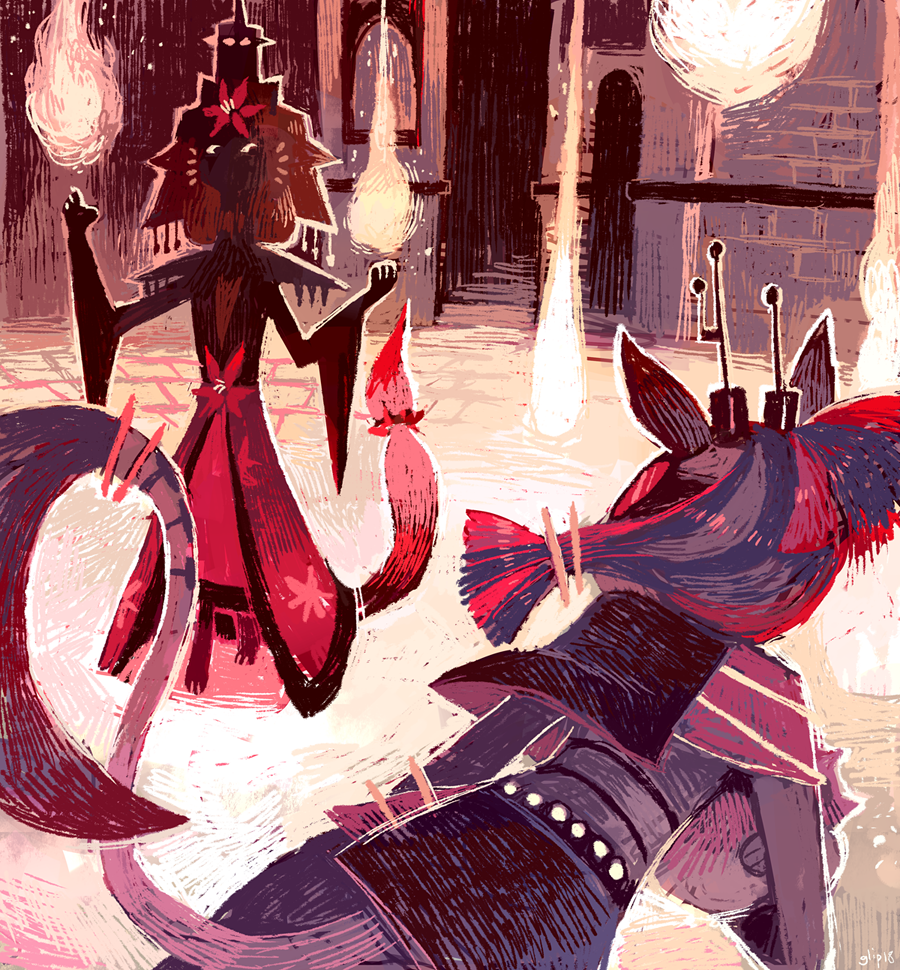 Part 7 of the story by Opa-opa!

She pressed herself off the wall. On three, she told herself.

She burst around the corner and sprinted towards the open air. For the first few terrifying steps, she was forced to head directly at Jasmaby, before the alley opened onto the plaza. Jasmaby had gone with an imperial look today, all corners and sharp edges, and as Neon charged towards him not a hint of surprise or concern crossed his face. She felt her knuckles burn, but knew better — she juked right instead, just as the first fireball zinged across her path, landing close enough for her to feel the wave of heat as it impacted the ground.

The next two fireballs cut it closer, one zipping between her neck and her shoulder while the other cut a burning line across the back of her upper leg. They were coming from her blind spots, forcing her to dodge on pure instinct. That was how she almost missed the fourth one — directly in front of her, way up high, dropping in freefall right in her path. It was reflexes alone that had her leap forward, diving over the scorching blast as it landed directly in front of her, rolling as she hit the ground on the other side and continued her run.

It's working, she thought to herself. I can make it!

This may have been the distraction that kept her from reacting to the next one in time. It wove in from her right, curving erratically. She made to lunge left — but the ache in her side suddenly flared, stunting her movement. The fireball just barely clipped her, twisting her mid-stride and killing her momentum.

That was it, she knew. She didn't need to see the next one coming to know it was over. She made a last gesture, a final display — it was pointless, but there was nothing else to be done — of grabbing Chip and hurling it upwards, into the sky. The fireballs couldn't have damaged it, but somehow, it was the right thing to do.

The fireball came in sharp from the left and nailed her in the gut. She doubled-over at the blow, all the fight gone out of her in an instant. She wavered, preparing to collapse, when a second slammed into her back from above and drove her chest-first into the ground.

With bleary eyes, she tried to get her bearings, to see how far she had made it...

...before her lay the open space of the neighboring plaza. She blinked, not believing what she was seeing.

She had made it. All the way around. She had been aiming for a quarter-circle, and she had managed half. The plan had worked!

The dust was settling around her, and the intense burning sensation in her gut had already diminished to a merely aching sting. With some effort, she lifted her head to turn to Jasmaby. He was facing her, unmoving. She still had his attention. She quickly tucked one hand under her chest — perhaps he hadn't noticed she wasn't carrying the flag? She did her best to shoot the looming tiger a defiant look; every second she held his attention improved Charthur's chances of slipping away.

Jasmaby simply stood there, staring down at her. He made no motion to approach her. When the last of the dust had settled, he simply lifted his chin slightly, and said, "Nice try."

Neon struggled to contain her delight. Her unexpected success in dodging for so long (the entire half-circle! incredible!) may have sufficed on it own, but for Jasmaby to blow any chance he had at spotting Charthur's retreat with this smug display was delicious. Neon prayed that she would get to see the look on his face when he realized his error. Life owed her that much, at least.

Apparently satisfied, Jasmaby turned, slowly and smoothly, back to the alley mouth that Neon had come from...

...where Charthur was standing, thumbs hooked in her pockets, idly kicking a clump of dirt that lay nearby.

"Charthur!" Neon screamed. She reared up and punched the ground, arcs of electricity lancing off in every direction. But neither Charthur nor Jasmaby paid her any attention — they were lost in their own personal conflict. The impulse to turn away rose inside Neon, but she felt unable to obey it.