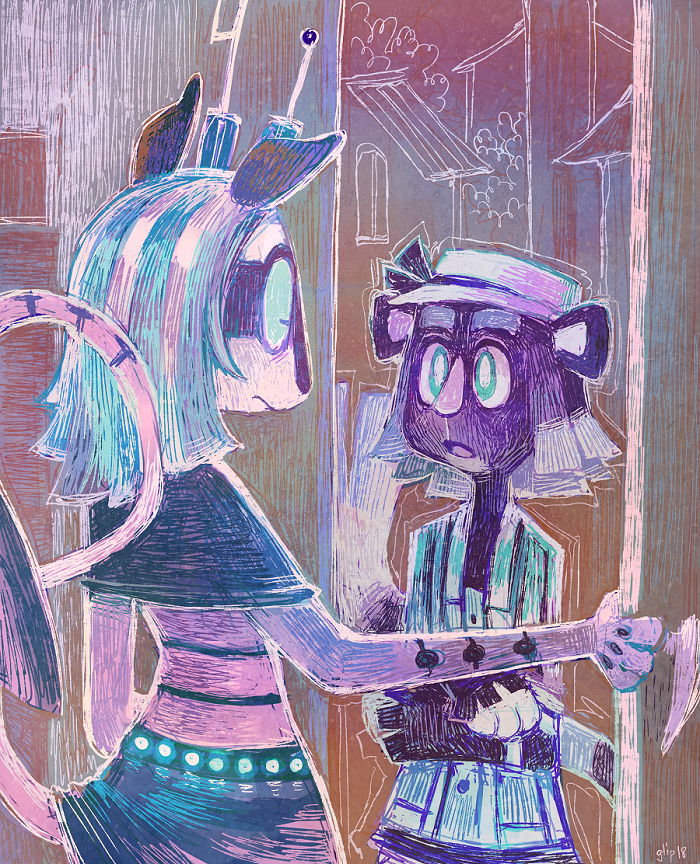 One more part to go after this! Story by Opa-opa!

Night had fallen over the city of Dewclaw.

In the distance, the raucous sounds of celebrating tigers — celebrating victory and defeat at the same gathering — could just barely be heard. It was background noise, only coming to conscious attention when the conversation took a noisy turn or someone let loose a particularly hearty laugh.

Neon focused on the task in front of her. The old, cracked eye augment had been removed cleanly, and now lay in a scrap box off to the side.

Neon's gaze occasionally wandered over to it. The sensor had been a prototype fabricated by an experimental material science workshop at one of Teslic Yard's satellite facilities. A few days ago, she had convinced that team to give it to her in exchange for "field testing" its durability. Technically, she supposed she now had one very concrete data point to provide, but it certainly wasn't what they were hoping for. The thought of having to tell them how she'd had gotten it broken made her cringe at the inescapable embarrassment.

At the very least, she owed it to them to fully dismantle the ruined device and provide a comprehensive analysis of how the damage had propagated. It would be completely inappropriate to leave them without even that. ...nevertheless, each time she glanced at it, she found herself licking her lips, and had to wrench herself away from the temptation.

The new piece, a standard filter, was an imperfect match, and after nearly two hours spent mulling over possible approaches to adapting it (not procrastinating, she told herself again), the actual work had gone more smoothly than she could have hoped.

All that was left was to make the final connections. The wires were ready. The contacts were clean. With tremendous care, she maneuvered her tweezers into position...

A sharp knocking at her door jolted her from her focus. She lightly thumped the table in frustration, causing the new eyepiece to roll out of position. She grit her teeth as the knocking came again. "Always at the worst possible..." she muttered to herself. A third set of knocks finally roused her from her chair to see who it was.

It was in the middle of the fourth set of knocks that she threw open her front door to find Charthur standing on her doormat, one foot tucked behind the other. Neon's eyes were drawn immediately to the small, brightly-colored bandage on her knee. Neon couldn't help but feel embarrassed by her anger a second earlier, and even moreso by how quickly it evaporated.

"Not at the party?" Neon asked, briefly.

Charthur shrugged. "The drink was getting to my head. I figured I'd come here instead."

This was a more plausible excuse than Neon had been expecting. While Charthur had many competitive skills, "drinking" was not one of them. In the realm of alcohol, she was a lightweight among lightweights. She was the only tiger that even Fizzy could accidentally drink under the table. That she was slightly askew at this moment lent credence to her pretense.

"Oh." The night air started to creep in through the door, prickling Neon's skin where it brushed past. "Any reason you came here in particular?" she inquired.

"Ah, I have a message," Charthur said. She looked away and coughed into her hand, before giving Neon a sudden, intense stare. "Jasmaby was serious when he said 'nice try'!" There was a look of earnestness on her face that Neon couldn't resist, and she felt the tension she was holding start to slip away from her. "To make sure you understood. He can be an intense guy." She placed her hand over her chest. "So just in case it was unclear, his praise was really quite sincere."

"Ah, that's..." Neon reached up to scratch the back of her neck. Apparently Charthur wasn't too drunk, because she wasn't speaking in limericks yet. "...that's considerate of him. Of Jasmaby," she corrected herself.

The two tigers stood in silence as the seconds passed. In the distance, there was a roar of laughter from the direction of the party.

"So, was that all? Only I was just in the middle of some important work..." Neon asked, cursing herself.

"That's," Charthur started, then paused. Her voice lowered, and her eyes turned downwards. "...no, that's not all," she said. "I realized something." Neon stood there, waiting, unsure if she should prompt her friend further or give her time to choose her words. Experience told her to go with the latter, so she simply waited, until Charthur was ready to speak: "Before, when upset, I brought up Nim's mailing."

Neon steeled herself. She hadn't expected to need to go on the defensive, but she was ready for it. She had reviewed the messages in question, and was ready with a dozen counterpoints, whatever the line of attack. So it left her off-guard when Charthur went on, "...but I didn't mail you." Charthur looked up, eyes shining softly. "And that was my failing."

"Ah," Neon said, relaxing again. She let out a long, slow exhale, closing her own eyes. When she opened them again, staring into the distance, the night seemed quieter, just a little bit. It wasn't precisely what she had been hoping for, but so much of life seemed to be a lesson in taking what you get anyway.

"Well," she sighed, "perhaps the conclusion to be reached is that we're both idiots." She looked down at Charthur, and at the small smile on her face. "I'll accept your apology if you accept mine. Deal?"

"Deal," Charthur said, the relief evident in her voice.

There was another pause. Both tigers turned briefly at the sound of a loud cheer. There was a flash on the horizon, some tiger apparently showing off, and the cheering rose a second time before quieting back down. They turned to each other.

"So, uh," Neon said, scratching the back of her neck again. "Did you want to come i-"

But Charthur was already pushing her way past the slender goat. She wasted no time, beelining for Neon's workshop in the back of the building. "Wait!" Neon called after her. "Don't touch anything on my desk!" she cried, slamming the front door and hurrying in pursuit.