◀ previous by date ◀ previous in Tangle, Tussle, Tiger: Fight
next ▶ 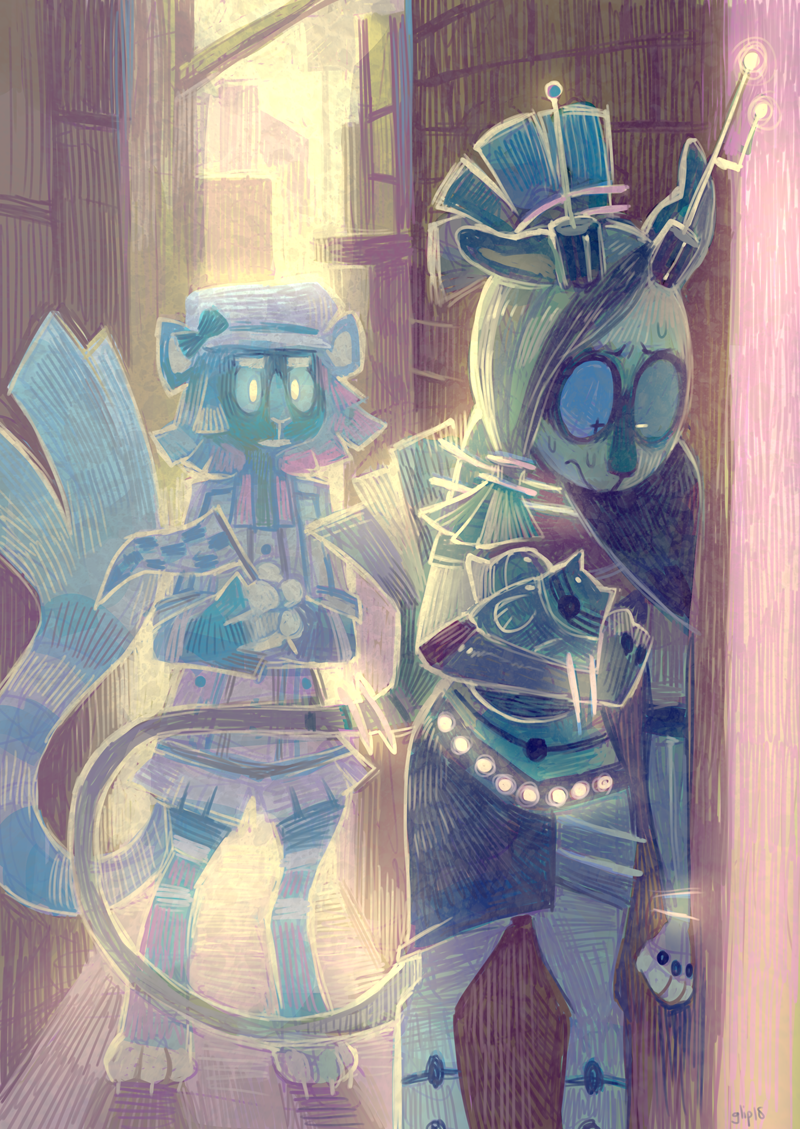 ◀ previous by date ◀ previous in Tangle, Tussle, Tiger: Fight
next ▶

Part 6 of the story by Opa-opa!

There was a corner up ahead. Around it shone the light of the open plaza. There was no sign of ambush, no sounds of someone approaching from either direction. Their capture zone would be just beyond it. If they had made it this far undetected, the odds that it would be lightly guarded were nearly certain. Whoever it was, one last sprint, and they'd be home free. Here it came.

Neon let her hit the wall just next to the corner with a thud, preparing herself for the final dash. As Charthur peeked curiously around the edge, Neon worked out the conclusion to her speech. "Charthur, I mean it. I want you to be with someone who makes you happy. So I'll believe you if tell me that it's... that it's..."

"I was going to say it this time," Neon protested.

"No," Charthur responded. "I mean: Jasmaby." She jabbed a thumb around the corner.

Neon stared at her, uncomprehending. Then the fear caught up with her from behind. "No," Neon whispered. "Not him. Not here." She edged her head slightly around the corner, just enough to catch a glimpse of orange fur and flame before retreating back to the shadows.

Neon whipped her head back the other way. "The intersection. If we retreat, if we take another route..."

"Then Adrian crushes us, sure as can be." Charthur puffed out her cheeks, and exhaled. "We're doomed, we two, you can plainly see." But something had changed. Neon recognized it. She could read it in the expression on her friend's face. The fear was gone, as was the despair. Now, what Neon saw in her face was the emergence of her old self. She was thinking, considering. Neon felt a spike of hope in her heart.

Charthur peeked around the corner again. When she pulled back, her brow was furrowed deeply. "Way too few fireballs. But why..." she mumbled under her breath.

Neon looked down at the tiny robot still tucked under her arm. "Chip, are your thermal imaging sensors still functional?" Chip chirped a note of confirmation, so Neon went on, "Scan around the corner, and put the data in our shared AR space..."

"(BZZT!)" Chip buzzed in its own, incredibly noisy version of a whisper. "(TASK ALREADY COMPLETE. BEEP!)"

Neon turned her head, looking through the wall as Chip's data flooded her glasses. The sky burned, painful to look at, but even so, Neon could pick out at least a half dozen whorls of color moving among it. Jasmaby's fireballs, she knew, ceaselessly patrolling. There, on her level, a pillar too bright to look at, incandescent. Jasmaby himself. And then...

"Charthur," Neon whispered urgently. "It's a trap. There's a concentration of heat about 5 meters past the alley's exit, in the ground, directly ahead of—"

But Charthur interrupted, staring at the corner's edge, apparently not listening. "I have it," she stated. "I have the plan."

"Ah?" Neon said, and couldn't deny how her heart fluttered. "What is it?"

Charthur chewed on her lip for a second, then explained, "There's a number of little side streets to the left of the exit. With Jasmaby distracted, we can get the flag to one of them and get back to our territory from there." She reached down to rub her injured knee without looking at it. "There's no way the enemy team will have beaten ours back that far yet. All we need to do is find a friendly face."

Neon placed a hand on her shoulder. "There's an evident flaw, Charthur. You're useless as a distraction. I don't wish to doubt you, but you won't be able to dodge a single fireball with your leg as it is."

Charthur nodded, still staring away. "I know. It works out perfectly. You run as the distraction, I slip into the side street. Jasmaby thinks you have the flag, so he's sure to stay fixated on you."

Neon started to correct her, "Charthur, I do have the-" before reality caught up to her. She sagged forward. "Oh," was all she could say.

Charthur reached back with one hand, not even looking. Neon stared at the hand, extended towards her once again. This hadn't been the plan. But she felt out of words, out of protest. Her role was waiting for her. All that remained was to step into it.

With more ache in her heart than she could have predicted, she quietly and gently surrendered the flag to it.

Charthur's grip closed, and that was that.

"You circle around to the right," she was saying. "If you can manage even a quarter-circle, that should buy me enough time to slip past him."

Neon nodded numbly. She worked her way past Charthur, lining herself up with the edge of the corner. She breathed in, then out, trying to quiet her heart.

She leaned on the wall, suddenly feeling an exhaustion that slid down out of her head, dripping through her body, clinging to every muscle and dragging every piece of her down into the dirt. She gave it a moment — it didn't pass, but she managed to push it into the background of her mind again. This was just how things were, she told herself. There was nothing to be done about it.

She pressed herself off the wall. On three, she told herself.