◀ previous
next by date ▶ next in Tangle, Tussle, Tiger: Fight ▶ 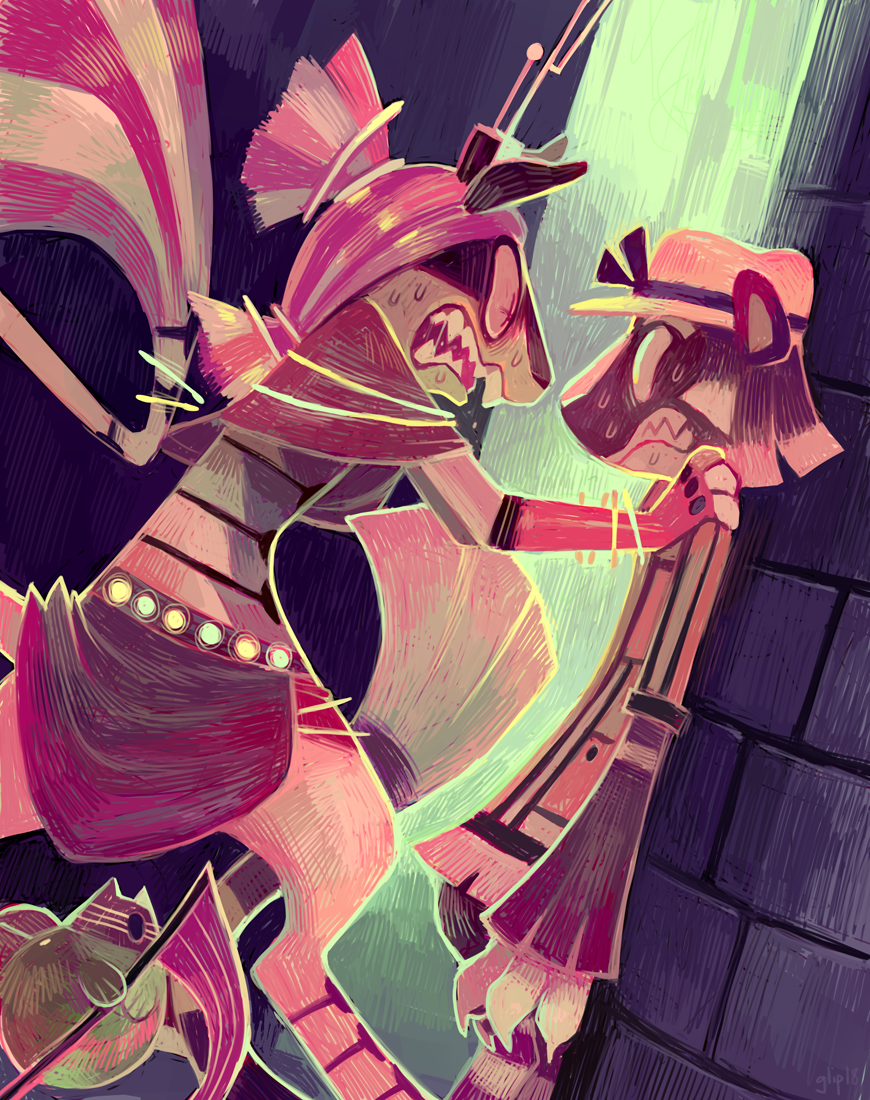 ◀ previous
next by date ▶ next in Tangle, Tussle, Tiger: Fight ▶

Part 5 of the story by Opa-opa!

A nasty, closed smile grew across Charthur's face. "Oh, you're on his side now?" Her smile grew on one side, exposing a fang. "I'm supposed to listen to you, when you can't even say his name?"

The accusation caught Neon off-guard, her chest constricting. She squeezed the flag with all her strength, a potent "pop" as her knuckles lit up. "I can say his name. And yes, despite..." she fought briefly through a haze of thoughts and came away without a single useable word, so she went with, "...matters, I do," she breathed in, and as part of the exhale, said, "...I do want you to be happy."

Charthur flung her hands in the air. "Wonderful! Perfect!" she shouted, "How is that supposed to help me not screw up again?"

"When have you screwed up?" Neon was shouting now as well, caught up in the moment. "I don't know what you're talking about!"

"What don't I screw up?" Charthur snarled, leaning forward, bringing her face closer to Neon's. In rapid succession, she gestured to the alley, to the flag, to the space between the two of them. "I've screwed up this, I've screwed up us! It's only a matter of time before... before..."

And just like that, the anger was gone. She had dropped it, as one drops a mask, revealing a face of pure despair. "...before he finds someone better than me," she whispered.

And just like that, there it was. She could hardly believe it. It was right in front of her.

One of the openings she had been looking for.

Not just that, one of the better ones. And, even more incredibly, she hadn't needed to do anything. It had simply happened, all on its own.

Neon knew what to say. She had prepared for this. She had thought it through, again and again and again, considering every angle, traversing every branch, plotting out every possibility. Her response was ready, and she knew it would work.

But the best part was that she hadn't had to introduce it. She hadn't even needed to imply it. And so absolutely no one could blame her.

Say it, said the voice inside. You foresaw this. This moment. It was right. You know exactly what words to use to pry open this crack. Jasmaby's face flared into her mind, unbidden. Ruin him. Win. Take your victory! Doesn't he deserve it? He deserved it, she knew. He deserved it so dearly. Then say it. Finish this, the voice urged.

Neon steadied herself. She "shouldn't," she recognized. It was "wrong." But when had that ever mattered?

She said the words:

"Someone better than you? If you think about it, he could have anyone."

Charthur's eyes widened slightly. Her entire body seemed to sag, and suddenly she seemed very small indeed. I win, the voice said. He deserves this. She deserves this. You deserve this.

But now there was a new feeling in her gut. New words, bubbling up. She knew she would regret saying them. She knew they would hurt to say them, the most raw, worst kind of hurt. But she knew just as clearly that it would hurt even more not to, so she said these words too:

"And he chose you," Neon screamed. "So I need you to stop denying it to yourself!"

Neon grabbed Charthur's shoulders and forced her backwards, pressing her up against the wall. The little grey tiger offered no resistance, allowing Neon to pin her in place. "No, no buts!" She shifted forward, putting her full weight against Charthur's body at the points where her palms met her chest. "Listen to me. Listen carefully."

She leaned in. Her head was a fog, but this was her zone. The argument materialized from the void, instant-by-instant, flowing smoothly. "He doesn't act on a whim. He's slow to break ties easily with business partners, much less personal relations." She spoke the argument as rapidly as it came, feeling as if she only comprehended each portion once it had been said out loud. "Despite his extensive and... and extremely public sex life, he's only had..." (Neon hesitated here. Regardless of the logical absurdity of it, experience told her that using the exact number here would be less persuasive, somehow. So she pivoted to:) "...very few romantic partners. Every single relationship brief and, according to all public evidence, shallow. None remotely resembling his partnership with you."

Neon pointed a defiant finger in Charthur's stunned face. "Above everything else, his psychological and social profile speaks of extreme passion and dedication in his pursuits both professional and intimate." She jabbed the finger in Charthur's chest, making her flinch in surprise. "So you cannot continue denying that he desires you." She leaned in, bringing her face as close to Charthur's as she dared. "He wants to make this work. You're not the only one fighting."

Neon stopped there, the better to catch her breath. It had been an incredible argument. Too incredible, she realized, to have been truly spontaneous. It must have been there, unheard, the entire time.

And it seemed to have had some effect. Charthur stared at her, mouth open, an unreadable expression on her face. She breathed in. She looked away. She asked, "How... how do you know all that...?"

Not releasing her grip, Neon managed to pull herself away slightly. Her brain finally caught up with her mouth, a feeling of control coming back over her. "I researched him. Extensively," she explained. This was true. "Because I wanted to know what you see in him." This too was true, if a bit misleading. She waited until Charthur had turned back to her before continuing: "Because I need to know that you're with someone who deserves you." This was true. More than that. This was the truth.

She had thought that very thing so many times, countless times before. She had lost track of how many times she had drifted into uneasy sleep after a long night of planning, thinking those precise words.

But it was only now that she realized just how true it they were.

And what they really meant.

She let go of Charthur.

She stood up straight. She walked away.

For a dozen steps, she walked alone, in the silence of the confined corridor. Then she heard the sound of Charthur's footsteps following behind her, irregular and arrhythmic. "Neon," Charthur called after her. "Neon."

Neon sighed. There were emotions, and plenty of time later to process them. For now, she put on a tone of mock annoyance, and shouted back, "Anyway, it's an obvious contradiction that a 'perfect' boyfriend would end a relationship over a War." She held up an admonishing finger, blindly waggling it over her shoulder. "What kind of idiot would let herself believe that?"

Charthur snorted. "We've been friends over a decade, that's quite a slam." Neon slowed her pace for a second, giving Charthur the opportunity to tuck herself neatly under Neon's shoulder. As she draped her arm across Neon's back and squeezed herself into her side once more, she declared, "You should already know the kind of idiot I am!"

Neon snorted back, unable to help herself. "You have a point," she admitted.