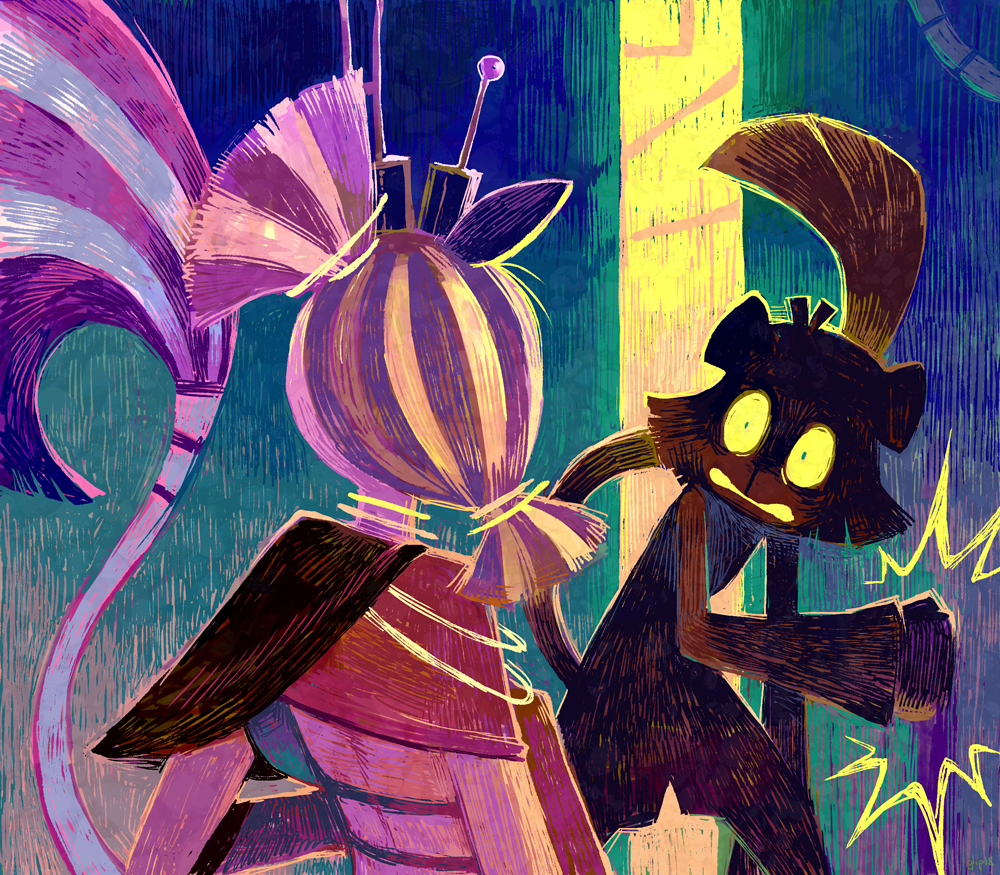 Part 4 of the story by Opa-opa!

Charthur was grinning, breathing heavily. She flashed a smile and a wink at Neon — then winced, reaching down to touch her injured knee. Neon looked down with concern, until a second thud, and a tiny crack in the wall broke her out of the moment. "How bad?" she asked.

Charthur shrugged, and started to jog down the alley again. But after a few steps, she stumbled, prompting Neon to rush forward and catch her up under the arm. Neon stooping, Charthur leaning on her, right into the tender spot where she slammed her side earlier, the two continued on, moving as quickly as the small grey tiger would let them.

"Not much farther," Neon muttered, just to break the silence. There was hope still, she told herself. Encountering Adrian here all but proved Jasmaby must guarding the main thoroughfare, while his minions swarmed the alleys, hoping to flush them out. As long as they continued down this route, they could avoid him completely, exiting well within their own team's territory. "As long as we don't run into anyone else, we'll be fine."

Charthur chuckled quietly. Then, excitement rising, she declared, "Did you see that? What a threat! As close a fight as fights can get." She clenched her fist, raising it. "They've improved so much! And so I bet: We'll make a true tiger out of Adrian yet."

"Do you have any ice left in you?" Neon asked, more curtly than she intended.

As an answer, Charthur held up her other hand, the one not looped over Neon's shoulders. She clenched it, then released it, revealing a pair of miniature sickles, with handles too small to grip and blades about the length of one finger. She clenched her fist again, and the sickles vanished.

"The word you're thinking of, I don't mean to be rude," Charthur said, faux cheer in her voice. "But you and I? We're thoroughly screwed."

The pair hobbled around a corner. There was no time now for scouting, no time for caution. Not any more. All they could do was keep moving, and pray.

"So, if we do encounter anyone else... what's the plan?" Neon asked nervously.

Charthur shrugged, pressing against Neon. "I hope this isn't shocking news. At this point? We can plan to lose."

Neon stared ahead. "That's not a plan, Charthur. You can't plan on losing." She furrowed her brow, feeling like she couldn't find the words for what she wanted to say. "You've never failed to have a plan before."

Another shrug. "Impotent and hobbled? I'd say we're done." Then her eyes opened wide, a thought clearly crossing her mind. She sucked on her lip for a second, before continuing, "Unless you leave me here, and go for a run."

Neon glanced at her friend for a second, before staring back down the alley. The thought hadn't even occurred to her. She rolled it over in her mind exactly once, before deciding. "No. We can do better than that."

There was a 4-way intersection. Neon looked to Charthur, but found her staring vacantly into the middle distance. Neon bit her lip, then spoke up. "Left." She said. "Shortest route. Direct line to our team's territory. Best chance." And zero chance of running into Jasmaby, she added silently. She made the turn, Charthur following her without resistance.

They were silent a while longer. Not able to stand it, Neon threw out, "We could still win, you know. There's still a chance we could slip past them undetected. It's not far now..."

Charthur laughed without humor. "Who do you think that next we'll be meeting? It'll help us prepare for our beating."

Neon growled. "Stop it. Stop talking like that." She adjusted her grip, hauling Charthur up and tucking Chip further under her arm. "You never used to talk like that."

Neon growled, not caring to restrain herself. "This isn't like you," she snarled. "You never used to give up."

Charthur's grin grew weaker, and softer, and smaller. "We've got no hope, Neon. Not even a mote." Sighing to herself, she finished, "I'm just not looking forward to hearing Jasmaby dump me." A heartbeat passed. "Gloat," she corrected herself.

Neon nearly tripped, almost bringing the duo down as one, before correcting her misstep. She whipped her head to look at Charthur, who was staring directly ahead, eyes set wide in defiance. "Charthur," she intoned.

"Charthur," Neon proceeded carefully, seeing the first beads of sweat forming on her friend's temple. "Why would he dump you?"

The anger overtook Charthur's face in an instant. She withdrew the arm looped around Neon's shoulder to force herself away, hobbling a few more steps forward. "Well gosh!" she shouted sarcastically, directing her voice away from Neon, at the rough, brick wall. "I don't know!" Neon resisted the urge to back away from the bundle of fury. "Maybe because he's this, this, amazing, wonderful guy," her hands curled into fists, and she slammed the wall with the side of her fist like a hammer. "...who's gorgeous! And perfect!" She punched the exposed bricks of the wall again, harder this time. "And I'm this ridiculous little mess," She slammed the wall a third time, before whipping her head back to Neon. As Neon took a tiny step back instinctively, Charthur finished, "...who has no idea what's she doing!"

Charthur advanced on her. "So would you stop insisting that this is something we can win and just let me get it over with?" She growled.

Neon's breathing became very small and shallow. It was important she speak carefully. "He wants to be with you," she said, as steadily as she could manage. "He's lucky to be with you."