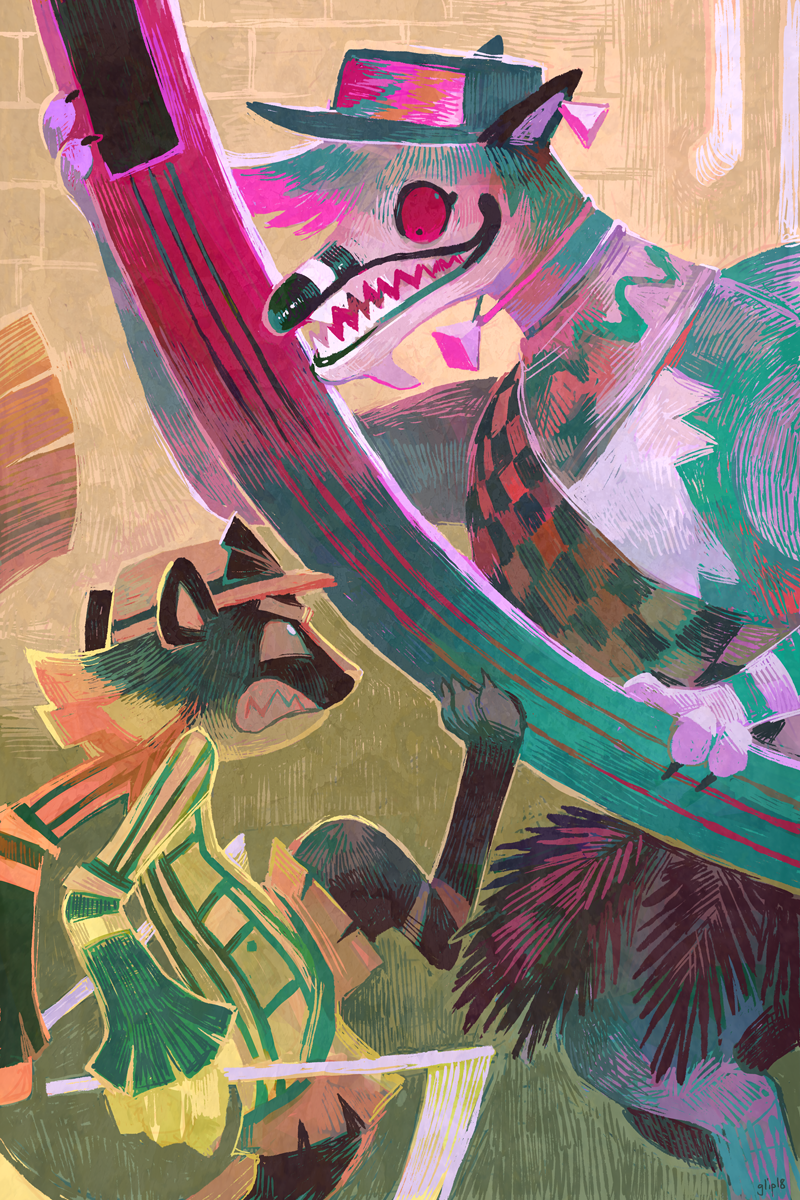 Neon padded behind her wordlessly as they darted across the open avenue and into the next frigid alley. She knew the right thing to say — it sat in her stomach. Should she just say it? Maybe that was the only way out of this. As she resolved to just get it over with, a feeling of anxiety, lightly tinged with relief, washed over her.

But just as she opened her mouth, Charthur whipped around again. "I get it, you know," she said plainly. "You're jealous."

Neon sputtered a half-dozen unrelated syllables before Charthur went on, "I know you think it must be lame; I'll spend more time with him, have less time to game." Neon bit her tongue, and after weighing her options, nodded at this. "I was just hoping that you would be a friend." She exhaled through her nose, before finishing, "No matter how badly you want this to end."

"I don't!" Neon cried. "That isn't the reason for my actions! That's provably false!" she protested.

"If I wanted to act with the intention of sabotaging your relationship with... that guy," Neon explained carefully, "I would have, for example, pointed out to you that his fame is incompatible with your scopophobia." She extended a finger. "I would have suggested that, after a few random encounters with the media or excited fans, you would quickly come to associate being in public with him with overwhelming dread, poisoning your private feelings for him."

She raised another digit, "Simultaneously, while he might attempt to work around your phobia, he would inevitably come to view it as curtailing his freedom, which my research leads me to conclude that he would find intolerable to an extreme degree." She brought her hands together, ready to deliver her conclusion. "However, rather than bring these facts to your conscious attention, amplifying their effects, I chose instead to withhold them. Thus, my actions improved your chances of working through this issue as it arose naturally." She crossed her arms, satisfied with how neatly she had managed to make her case.

...however, Neon found herself staring into the same flat, hostile expression as before. Shaking her head to herself, Charthur quietly turned and started to move down the alley again.

"Wait!" Neon cried after her. "I didn't do it, though!" She snarled, feeling a breaking point approaching as yet another plan fell apart. "You can't be mad about something I didn't do!"

"I guess I'm not mad, then," Charthur snapped back, slowing her pace as she approached a fork in the alley, one passage leading left and another leading straight ahead.

"You asked, and I explained!" Neon shot back. "How is that my fault?"

"If you don't get it, I won't explain." Charthur started. She started to turn the corner, turning left instead of going straight ahead. "You'll—" was all she managed before leaping back, a sound like thunder as the attack slammed into the ground.

Neon skidded to a stop as Adrian's grinning face leered around the corner. The hulking shark grunted as they tugged their surfboard out of the ground, a deep gash in the packed dirt of the street where it had struck. They tilted their head back, victorious, as they spotted Neon and the flag. "Tide's turned, donks. You ain't going nowhere."

Charthur's sickles were in her hands in a flash, a crisp crack ripping through the air, caused by the flash freeze. She swung one in an overhead strike, but Adrian twisted their board to deflect it, the blade skimming harmlessly off its surface. "Watch the wax job!" Adrian mocked, their grin growing wider. "Don't you know when you're sunk?"

Neon panicked, running her palm over her metallic knuckles. Again and again she struck them, but couldn't manage to get a spark going. In these tight quarters, Charthur's agility meant little, while Adrian's board would be a near-perfect defense. Worse, Adrian didn't even have to win — just stall them long enough for help to arrive. Neon dug the heel of her palm into her knuckles with renewed desperation. She needs your help, her brain screamed at her. Concentrate!

Charthur screamed a battle cry as she went on an all-out offensive. She lashed out with a kick, then a sideswipe, then a shoulder barge, but Adrian simply twisted their board to parry each blow. Each attack forced Adrian back slightly, pushing them back around the corner of the intersection, but Neon could already read the exhaustion on Charthur's face.

Adrian and Charthur were locked up just at the mouth of the left fork. There was an opening between the right wall and Charthur's back — Neon could dive through it, then continue straight, leaving Charthur behind to fight Adrian on her own...

Except she couldn't. She couldn't abandon Charthur, not without a fight. "Charthur, wait, just... wait a second..." She struck her knuckles, feeling the first stirrings of energy moving between them.

But Charthur wasn't listening. She continued her assault, striking a second glancing blow off of Adrian's surfboard. As they pulled back, Charthur spun, swinging her sickle in a full circle, managing to snag the edge of the surfboard and yank it downward. In one motion, she dislodged her sickle, sprang backwards to brace herself against the opposite wall, then launched herself at Adrian's exposed face, a reckless attack...

...Adrian's other hand came up and caught her mid-pounce. The captured tiger lashed out with a kick for Adrian's chin, but they shifted backwards to avoid it. Struggling to hold her tightly, the massive vanguard instead hurled her back against the opposite wall. In the moment it took her to recover her balance, they shifted their board into a two-handed grip and jabbed low. The weapon struck, driving Charthur's knee backwards against the wall before withdrawing.

Neon could only stare in horror as Charthur grasped the wounded joint, buckling over it. Adrian was bringing the board around, as if in slow motion, lining up a mortal overhead strike...

...Charthur brought both sickles up, crossing them before her head. There was another icy crack, and Neon glimpsed the crossed sickles fusing into a shield in the moment before the surfboard struck. The impact drove Charthur down, her bad knee wavering. But she pushed off her good leg, driving Adrian back around the corner entirely, still grinning, amused, and holding their surfboard vertically to guard against her shove.

As the surfboard and shield lined up with the mouth of the side passage, Charthur yelled once more, and this time the crack was so sharp it hurt Neon's ears. She flinched and turned away reflexively. When she opened them again, Charthur was staring at the left fork, empty-handed. It took Neon a second to register that the side-alley's opening had been sealed off by an icy wall, with Adrian's surfboard neatly embedded in the center.

Neon clutched the flag to her chest and glanced down at her knuckles — still entirely inert — before trotting over to Charthur. From the other side of the wall, she could hear a frustrated thud, and Adrian shouting at them, "Blood in the water, dweebs! Soon as I break through, you're gonna find out just how hungry Valentina can get!"