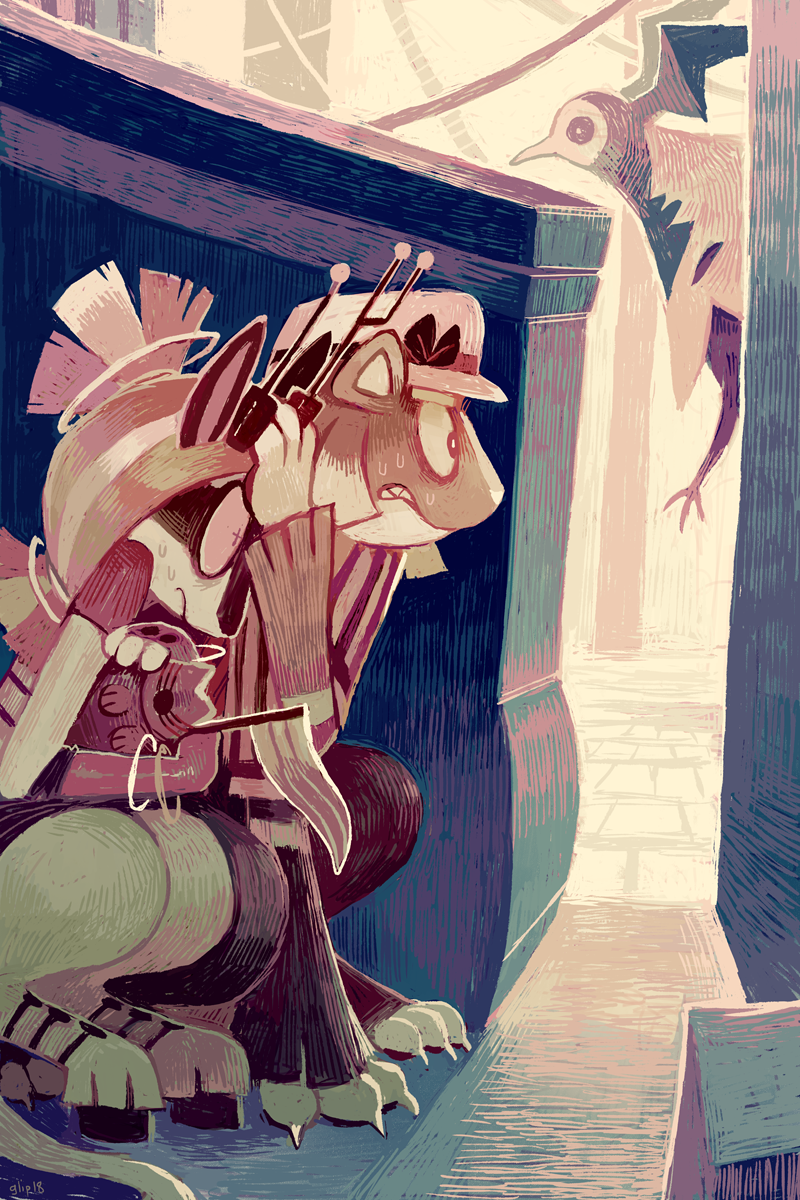 "Nicely done!" she heard Charthur say, and turned to spot her sitting casually atop the crate wall. (Of course. It was too much to hope she had missed the whole thing.) Neon brought one hand to her chest, reaffirming her grip on the flag, trying to slow her breathing. "So I decree. Even if it was just Zeromy."

Neon stared for a second at Charthur's approving grin. "Uh. Yeah," she said. She held up her fist, brushing aside the fur growing over her knuckles. Even in the darkness of the alley, her knuckles gleamed, each one a perfect metallic half-sphere. She ran her other thumb across the row, eliciting a brief dance of little electricity between them. "The product of a few weeks of dietary experimentation." She ran her thumb back, and grimaced at her failure to produce any further sparks. "Looks as if my capacity is still limited to a single burst, however," she admitted.

Charthur gave her an exaggerated shrug. "I'm still impressed, never you fear." She jabbed one thumb into her chest. "I can take care of you from here."

There were twin notes of pride and excitement in her heart, but she found them difficult to concentrate on. Instead, she tenderly plucked Chip out of the air and turned it around. Its body was, as she knew from experience, all but invulnerable, but sadly the shadowy spike had managed to connect with the augment she had installed over its optical sensor, cracking it. Neon's heart fell — it hadn't been easy to convince the lab to relinquish it to her in the first place. Long, tiring hours had gone into adapting the device, and now, mere days later, she had let it be destroyed. There was no way that was going to be a pleasant conversation.

She looked back up at Charthur, who was extending a hand to down to her. The gesture bolstered her spirits slightly. Tucking Chip under one arm, Neon began the climb over the wall. What should have been a trivial jaunt up the surface proved to be a frustrating struggle. Between Chip, the tightly-held flag and the ache in her side, she was already at a disadvantage. Still, it was the sort of ascent that her hooves could have otherwise handled on their own -- yet she found herself having to concentrate to find any stable purchase at all, and her head was far too fogged up with other thoughts to spare any for the wall. As a result, it felt like it took all her strength to make any progress at all.

Through her haze, Charthur's words floated, "I'm impressed! A clean KO! And you managed, all solo." She concentrated on her footing. Once, then twice, she nearly slipped back down the wall as she attempted to plant a hoof on nothing, but each time she managed to catch herself from plummeting at the last second. She could feel Charthur's eyes on her. Every inept slip sent a shot of tension through her frame, making the climb even harder and more maddening.

"I'm concerned that Zeromy was able to set an ambush for us," she mumbled, mostly to herself, mostly as a distraction. "My predictive model had that as a remote possibility."

Charthur clucked her tongue. "Jasmaby's work, make no mistake. He won't give us another break," she concluded grimly. She leaned down, bringing her hand just within reach of Neon's. Neon took a moment to stare upward at the offered hand. Then, with one good push, Neon managed to snag it. Her feelings about being outplayed by Jasmaby must have been written on her face, for as she let Charthur drag her up, the grey tiger changed the subject, "That zap, again, was quite a skill!" Neon glanced up at her, almost at the peak now. "When next we duel, avoid it I will," she finished with a wink.

The surge of disappointment hit her too hard, too suddenly. Chip's eyepiece, and now being forced to give away her knuckles... they would've been difficult to take separately, but the one-two punch overwhelmed her. Before she could stop herself, Neon barked, "Where were you?"

Neon realized she was face-to-face with Charthur, and had shouted this from mere inches away. In that instant, the grin and good cheer vanished. Now, in their place, there was a flat, hostile expression. Neon had seen it plenty of times before — but rarely directed at her, and she found herself swallowing a painful lump in her throat.

"Yeah," Charthur said harshly. "Sucks, doesn't it?" With that, she turned and started descending the other side of the wall.

Neon felt herself lock up for a second. The impulse rose again, and she shouted down, "Are you mad at me?!" Charthur said nothing, but released the wall to fall the rest of the way to the bottom, before rising to stalk off. "You can't be mad at me!" Neon shouted. "You have to tell me why you're mad at me!"

Charthur didn't answer, but slowed her pace, giving Neon just enough time to awkwardly make her way down after her. As soon as she hit the ground, Charthur was off again, forcing Neon to run in pursuit.

"Sucks when you need someone and they're not there, huh?" Charthur said in a brittle voice.

"That's not an explanation!" Neon protested. "I don't understand what—"

Charthur stopped in her tracks, whirling around. "Weeks, Neon!" she snarled. "I was a mess for weeks! I barely left my room! I barely ate! And now you're all concerned about Jasmaby?" She half-turned away, snarling. "Where were you?"

Neon froze, her anger extinguished by cold regret in an instant. "I didn't... I didn't know what you were going through."

Charthur cocked an eyebrow. "That argument is open to assail." She crossed her arms in front of her chest. "Nim didn't send you any mail?"

Neon said nothing, but could feel the prickles of sweat breaking out across her brow, despite the chill of the alley.

Neon coughed, glanced down to the side, and scratched the back of her neck. "I'd have to query the exact number." She looked back up into Charthur's increasingly disappointed face. "But!" she declared. "He didn't make clear the exact severity of the situation. And I didn't..." She paused. She fought down the obvious, immediate thing to say. "...there was something time-sensitive, something I had only one opportunity to investigate," she went with instead. This wasn't a lie, and thus would have to suffice.

"What was it?" Charthur demanded.

Neon deflated slightly. "For my job. Yard stuff," she muttered. "You wouldn't be interested."

Charthur stared at her a moment longer, her glare feeling as if it might tear Neon apart. And then she turned away again, and this was worse. "Try me," she muttered.

Neon's brain went back and forth. For a dozen paces, she followed Charthur in silence, as the two approached the end of the alley. Before them, a broad street extended to the left and right, while directly across the street another alley beckoned.

Charthur extended her head out, but as Neon came up behind her, she retreated, shoving Neon behind a dumpster and joining her in the tiny nook. Neon, unable to help herself, tried to take a peek herself, but Charthur planted a hand on her face and shoved her back into hiding. She made two quick hand gestures: first holding up four fingers, then slicing her pointer across her neck. Neon nodded, and crouched low.

They huddled in hiding for a moment, listening for the sound of approaching footsteps. But Neon's mind was still racing. There was, before her, the possibility that Charthur would understand her experiment's importance... the temptation of a successful explanation was powerful on its own, but coupled with the chance for exoneration, it was undeniable.

Framing the invisible scene with her hands, Neon whispered, "There are these fields that pop up near the Yard, between two and five kilometers away from its main building, and last only a few days before vanishing." Charthur didn't respond, still staring intensely at the edge separating them from any approaching foes, but didn't make any indication for Neon to stop, either. That was an encouraging start. "They're nearly impossible to detect; some of our more sensitive scanners don't pick them up at all, while others only barely pick them up over the area's background noise. But if I carry any data storage device that isn't derived from TAL's hardware through one, it ends up... altered."

She paused for a second, waiting for any reaction. When it was clear none was coming, she went on, "That's how I found them in the first place, I'd be carrying a few databanks and suddenly, they'd all start throwing integrity errors simultaneously. But the critical aspect is that, while the data ends up wrong," she shook both hands, excited to have arrived at the important part: "it's still validly formatted!"

At this outburst, Charthur gave her a glance, and gestured for her to speak more quietly. Neon raised in her hands in apology, then went on, "The memory isn't being scrambled or corrupted, as you'd expect from an EMP blast or physical hardware damage. The changes aren't random, nor are they uniform. If anything, it's like the data is being replaced with," she took a sharp intake of breath, giving the moment its due impact: "...another set of data."

Neon paused again. This time, she noticed one of Charthur's eyebrows shift upward, barely perceptible. Emboldened by this encouragement, she went on: "Recently, purely by luck, I found one of these fields at the apogee of its potency, and I was able to set up an ionic transmitter and receiver at a tangent to the edge of the field. By sending a message across the border of the field, and altering the packet size with respect to the semantic atomic meaning of the data being sent, I discovered that..."

"Sure," Charthur said, signaling the all-clear. As she pointed at the alley across the street, she added, "Fine."