◀ previous by date ◀ jump to Tangle, Tussle, Tiger
next ▶ 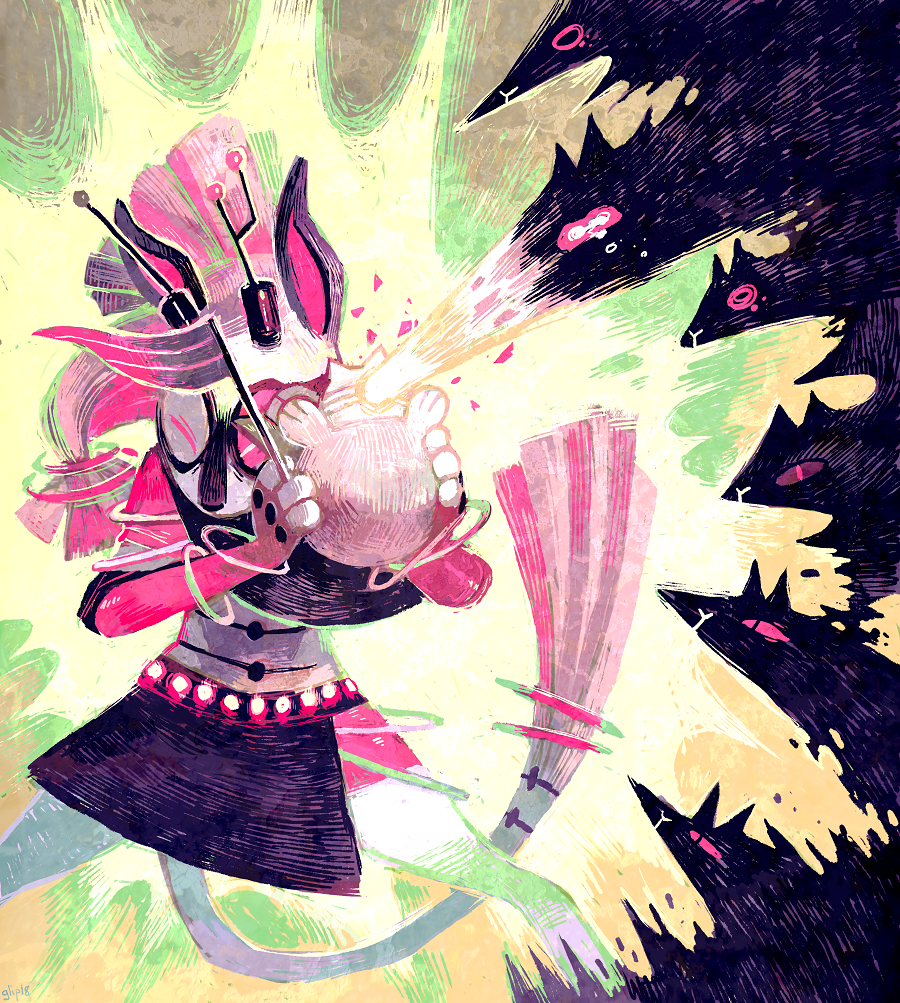 ◀ previous by date ◀ jump to Tangle, Tussle, Tiger
next ▶

WOW it's finally here, the start of the sequel to Opa-opa's "Tangle, Tussle, Tiger" wherein we learned how Charthur and Jasmaby got together! Thank you so much, Opa! And thank you Tiny for the outfit guidance on Neon!

Kid Neon gave a harried look down both streets. Both appeared to be deserted, but both were littered with dozen of blind spots, obvious and otherwise. She panicked, caught between two equally terrible options. "Chip," she whispered to the tiny bot hovering near her head. "Analysis. Scan for hostiles. Identify possible avenues of escape in the event of..."

She was cut off by Charthur grabbing her harshly at the elbow and tugging her off-balance, leading her down the narrower of the two streets, lined with evacuated stalls. She stumbled, caught her balance and ended up trailing just behind her, still getting pulled along by her grip. "Charthur, this contradicts my initial assessment," she protested. "I need you to present your reasons for..."

But Charthur shook her head firmly. "To explain I have no time. Trust I act with reason and rhyme."

Neon knew she was going to have to be satisfied with this. Instead of arguing, she fell in line with her insistent friend, matching her stride. The two adopted a hasty walk as they tread down the road, eyes darting from side to side in search of possible ambush.

At the moment, they were being hunted.

It had been a clever plan, well-executed. Neon had been proud of it, and with how quickly the team had adopted it and seen it through. Send everyone else on a abrupt, highly-coordinated frontal assault, forcing their enemies to hastily regroup. In the confusion, she and Charthur had managed to slip behind their ranks and seize the flag, currently clutched in Neon's right hand. It had seemed perfect — and Neon had briefly reveled in the light-headed rush of setting up her first flag capture, ever, back when things had seemed easy.

But something had gone wrong, and now they found themselves cut off from any support, their foes closing in from all sides. He — that fashion model — had seen through her plan, impossible as it seemed, and ruined things, yet again.

Neon hadn't planned — couldn't have planned — that they would've been isolated so effectively. Fighting wasn't an option; any prolonged battle would give away their position and allow the enemy to converge on them. That left "run away" as the only plan, yet again.

The odds weren't good. They got worse when, not even halfway down the street, Chip chirped, "Ping! Three hostiles detected, approaching north, two hundred meters." Neon skidded to a stop as Charthur planted a hand in middle of her chest. Neon recognized her crouched stance immediately. There it was, clear as day, a look on her face that said she was ready to fight. Her sickles glinted in the sunlight.

Neon planted a hand on her shoulder, lightly but urgently. "Alley, 20 feet back on the left. We can still escape." Charthur said nothing for a second. Then, still staring forward, she said. "I can buy you a delay. The obvious choice, a self-sac play..."

Neon gripped her friend's shoulder more tightly. "The additional time does not compensate for the vulnerability that would expose me to." She gave a tiny tug, not daring to pull any harder. "It is necessary for you to stay with me. Protect the flag," she added.

Charthur waited a moment more, before relaxing out of her stance. "Very well, then. Let's not dally. Lead me to your spotted alley."

Neon trotted ahead, weaving between the tightly-packed stalls. "This creates both the possibility that our pursuers will overlook our escape route and that they will divide themselves to cover a wider area to search for us," she rambled nervously. "Furthermore, the narrow environment will prevent them from utilizing their superior numbers, in the event that..."

"Yes, yes, I agreed," Charthur cut her off. "Enough explaining, time for speed."

"Ah, right." Neon said. She entered the alley first, the space too tight for them to walk side-by-side. The moment felt awkward to her, so she added, "I apologize if I've cost you easy KOs."

She could hear Charthur cluck her tongue. "I could have, maybe, probably won. But if we're surrounded, our game is done." There was an unexpected edge to her voice, as she continued, "I nearly blew it, we had to flee. I won't let us lose to Jasmaby."

Neon nearly tripped over a small piece of debris littering the alley floor. The name hung in the air, prompting Neon to ask before she could stop herself, "So... you two are really..." she search for the appropriate term. She rejected a dozen before finding one that provided sufficient accuracy while also being contextually-appropriate: "...an item?"

Charthur let out a "ha!", then responded, "An item we are, my answer is yes." She caught up to Neon, barging her way past Neon to flash a smile at the stripegoat. "A warrior of flame in a killer dress." With that, the smaller grey tiger rushed ahead, pausing before a turn in the alley. She dropped low and peered around the edge, searching for threats.

Neon came up alongside her, pressing her back against the wall and looking behind them. So far, there were no signs of being pursued, but it was only a matter of time. "And that's..." Again, the search for the socially-acceptable phrasing went poorly, resulting in: "...going... good?"

Neon noticed Charthur freeze up for a second. The tension rippled to Neon as she prepared herself to go on the defensive. Whatever it was, she was ready. She had worked through her arguments, accounted for every possibility. Whatever the problem, she could...

But an instant later, Charthur relaxed again. She didn't turn to face Neon, but continue to scan around the corner. And yet just enough of her face was visible for Neon to see the smile growing across it. "Uh," she answered, reaching up to brush her hair across one of her ears. "...great, actually," she finally answered. "Uh. Really, really... great."

This caught her completely off-guard. "What?" she sputtered. Neon ran a distracted thumb over the smooth foreknuckles on her other hand as she recovered, "Ah, I mean, I'm surprised that you would phrase it unpoetically." She bit one side of her lip, having not meant to invoke Charthur's quirk, but her friend seemed to shrug it off. It stood as proof of their long-standing friendship that she would tolerate a remark like that gracefully.

Not a hint of upset on her face, Charthur turned back to Neon, grinning. "Easy to say, because it's true. Really great, through and through." She signaled all-clear with one hand, and the two of them proceeded, sticking close and moving with purpose.

They arrived at an intersection. As each took a corner to glance around, Chip lit up again: "Ping! Two hostiles detected, approaching west, one hundred meters." Without even needing to glance at each other, the pair took the eastern branch, Charthur leading the way.

Neon chewed the inside of one cheek. She had been hoping to broach the topic more naturally. But it felt like this was as good as opportunity as she was going to get, and couldn't let the moment get away from her. She squeezed her fist around the flag, and came up behind her friend. "From my understanding," Neon said, trying to stick close enough for Charthur for her to hear clearly, "He has many difficult attributes, and I'm concerned these might make for a difficult... a difficult..."

Charthur interrupted again, mercifully. "I won't pretend, I know to what you allude. But I know he means well." She threw her head from side-to-side lightly, as if weighing her options, before continuing, "...even when he is rude." They had come to a wall of crates, haphazardly stacked in the middle of the alley. The two hissed a simultaneous curse as they were forced to slow their pace, steadying themselves against the sides of the alley as they picked their way over the litter scattered at their feet. Neon pressed on, "Charthur, if Jasmaby isn't treating you—"

But Charthur cut her off. "A little coarse, a little rough. We're certainly working on some stuff." She was moving nimbly now, deftly maneuvering her way up the wall. As she pulled herself over the top, she paused. "But, all the same, this may sound dumb," she said from the peak. She turned to look down at Neon, smiling widely. "I'm just... so happy at what might be to come?"

Neon let out a short annoyed snort as she kicked aside an impeding box, suddenly conscious of the awkwardness of her hooves. "That's—" Neon started, but as she arrived at the pile that Charthur was now descending down the other side of, Chip suddenly let out a warning chirp.

Neon turned to look at the little catbot hovering beside her. "Zero meters? Chip, recalibrate your—"

There was a sudden movement in the corner of her eye, a sense of the shadows sliding beside her. She whipped her head towards a gap in the crates to her right, just in time to see the darkness detach itself from the tiny opening and lunge for her, their forward edge twisting into a blade and extending towards her throat.

Neon squeaked and half-fell backwards as the blade skimmed by her face, lodging itself in the wall. Neon glanced upwards, expecting to see Charthur returning over the intervening pile. Instead, she saw nothing.

Her eyes returned to the shadows as they coalesced before her. The blackness grew darker, and by instinct Neon threw herself roughly against the stack of wood to one side just as a pitch-black dagger flew through the air where she had been an instant before. She struggled to regain her balance, clutching her side where it had impacted a jutting plank.

The shadows slid between her and the opposite wall, trapping her. Her breath caught in her throat as jagged shapes within the mass formed and glided against each other. Desperate, unthinking, she grabbed to one side just as the shade twisted into a wall of rushing spikes —

The spike extending towards her throat hit Chip with a tiny dink as she held the tiny bot between the two of them. Chip buzzed an angry bzzt before releasing a flash, flooding the entire alley with blinding light. The mass of shadows flung themselves backward from the piercing illumination, hissing with many voices at once.

Neon saw her opening. She pushed off the wooden debris, throwing herself to the side of her foe and landing a close-range punch aimed right at their center. There was a short, sharp crack and a brilliant blue flare, followed by the unmistakable smell of ozone.

The shadows reeled and then slumped to the ground, briefly revealing the slender tiger with jet-black fur underneath as he fell. He lay still in the alley. His shadows crawled back and forth on top of him, mewling almost inaudibly as they tended to their fallen master. Neon shook her hand, the numbness that followed the electrical discharge slowly giving way to a dull ache. She realized she was gasping, struggling to breathe again after the encounter.