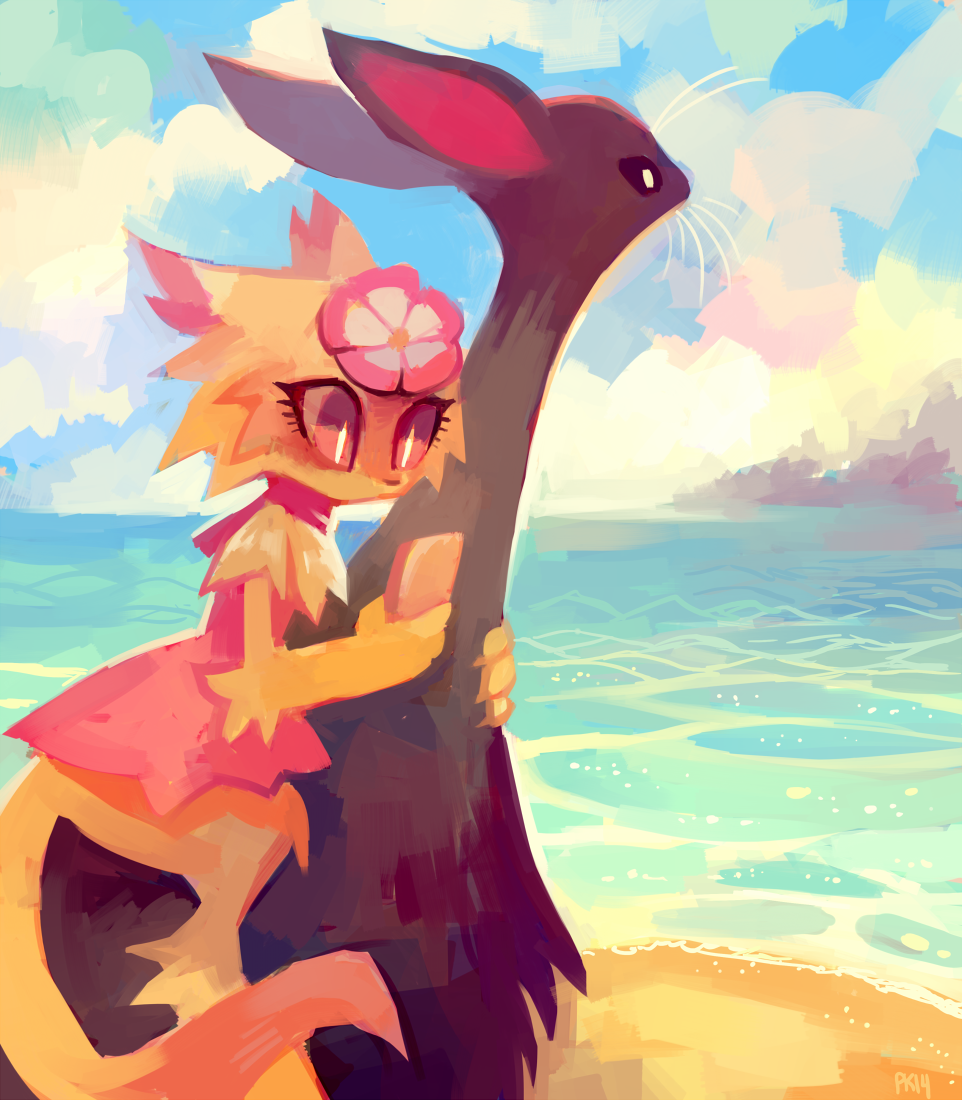 Papaya watched from back in the crowds as the Maitre d' clapped her claws together in delight. The other judges nodded in approval. Armando's meal was the only one to elicit such an elated reaction from everyone on the panel throughout the entire experience. His meal was impeccable, just as she had expected. He didn't even end up needing her help during the competition, as Armando had somehow ended up with more assistants than the other chefs. There had to have been some mix up, but it worked in his favor in the end, and he wasn't going to argue. Neither was she. The Maitre d' either didn't notice or didn't care. Would she have cared if the other chefs had received no ingredients? What, then?

Oh well. That didn't matter. What did matter was that, thanks to Papaya, it looked as if Armando would win.

About 10 minutes ago, his food had been in danger of going cold and remaining uneaten.

Sibyl's meal had thoroughly grossed out two of the judges, though not for taste. She had organized the platorgon eyeballs along the edge of the main meal's plate. Apparently, the judges didn't particularly like the way the eyes moved to look at them. If the goal had been to make the judges less hungry, Sibyl would have at least achieved that much. Alas, she ended up arguing with them, getting mad that they wouldn't at least try half of her meal. "What's presentation even matter? These're fierce beasts! You should be happy they're not eatin you!"

Ergrez and Errgriz's meal didn't really look too bad, but it might have been a tad too… exotic for the judges. Bone jelly and meat paste were not favorites among the panel. The gnolls in the audience howled in annoyance when the judges' lips curled in disgust before even trying half of it. The lip curl didn't go away afterward, either. Gnoll cuisine was simply beyond them. The pair of chefs grunted, disappointed. "Baby mouth can't appreciate adult food," one of them muttered. "Best gnoll food, judge have no taste," uttered the other.

Msrah's meal was pretty balanced, which was hardly surprising considering his request that assistants fetch items from each island. The problem was that his food was kind of bland. It wasn't that the food was bad, though. The judges all remarked that they felt really good after taking a bite or a sip of everything. They felt refreshed, mentally and physically. Unfortunately, it missed the taste marks. Msrah seemed unfazed, though, and stood by his cooking.

Vera's dishes were… something. Nothing actually looked particularly edible. Had she even been trying? Probably. Trying to make the judges retch, anyway. Why had she even participated? Everything looked overly charred, or lumpy, or black, or rotten, or generally diseased. Vera had a reputation for doing strange things during the gauntlet -- last year, she had made a dish that literally exploded in a judge's mouth, nearly choking him to death, and the year prior, she had turned a pfig into a living pastry that the judges were supposed to eat. While it was still alive. It screamed as they went to take a bite, and a judge soiled himself. It was a wonder she had been invited back each year, but the dishes this time were just making a mockery of the event. There was no mistaking any of it for food.

Except… the dishes actually tasted good. None of the judges were even going to taste her meals, but Vera acted threatening enough that they all took a tiny portion of the safest item, which was, supposedly, a catermelon. At the time, it could have been mistaken for a charcoal lump quite easily. Where the judges bit into it expecting a gritty, sooty taste, they apparently got something else. Something that made them surprised. And annoyed. Because it tasted good, despite looking like refuse from the very firepit she had used earlier. They eventually tried everything else. It was going well until they got to the dessert.

"It actually smells good!" remarked one of the judges. Vera had smiled at that - in hindsight, it was definitely a huge red flag. After each one took a bite of the pie (which looked more like a hideous, warty, oozing mess), only a few moments passed before the retching started. Each judge had to excuse themselves, barely making it to the other side of the stage where they promptly vomited. Vera couldn't stop laughing. It had been luck that the Maitre d' had been a split second from actually taking her own bite of the pie before the judges got sick.

Armando's dish had been last, and he had been furious. It seemed like his meal would go cold before it could be enjoyed by the judges, and that had really wound him up. Vera could not have possibly cared less about Armando's gripes. She was too busy howling in delight at her prank, relying on the stage's table to support herself. The audience had become confused. Some had even become a little sick, themselves, thanks to the gross catalyst on stage.

The Maitre d' had been in a slight state of panic by that point. She was trying to attend to the judges, to get them to drink water and some of the tonic used between meals to cleanse their palates, but it was no use. They were on the track to emptying their stomachs completely.

This had made Papaya start to feel a little frantic. If Armando became angry, he'd undoubtedly pay more attention to her and his other family, and that was something she couldn't have. She wouldn't have cared if he had simply lost, because Armando was hardly a sore loser. But this? It was being rigged against him, and that might make him do something unpredictable. No good. She needed to think fast.

So she scanned the stage for ideas before it hit her. Snaking her way through the audience, she shoved her way to the side that held Armando's dishes. "Hey!"

Armando almost didn't turn. He was facing Vera, brandishing his biggest cleaver and gritting his teeth. But, he turned enough that Papaya had caught his eye.

He didn't look any less pissed though.

But she had the key. She motioned him to come forward, and he begrudgingly did so. She didn't like being so close to the cleaver, but she also hadn't wanted Vera to overhear. Just in case.

His eyes lit up as she finished whispering and his grimace faded into a look of stunned realization. He went over to Msrah. After a few words, they both took Msrah's food to the poor judges currently in agony. They both managed to get a little bit in each judge's mouth before Vera realized what was going on and stopped laughing. Though bland, the food's healing properties eased everyone's stomachs immediately. Msrah had ended up taking his food to various audience members who couldn't handle watching others get sick.

As soon as the judges had settled down and returned to their seats (for the judging would not be over until Armando's food had been tried and scored), the final dishes were placed before them. It was endlessly lucky that Msrah had been a part of the gauntlet.

And that had been that. And here they were, with Armando's food having been received spectacularly.

Papaya left as the final tallies were made. Armando was clearly going to win. If nothing else, the body language of everyone on stage said it before the announcement was official. That was fine.

As long as Armando wasn't mad, that was all she wanted. Things were always so, so complicated when her extended family got mad. Everyone was more critical when angry. She couldn't afford any more special attention right then. She had things to do, places to be, cargo to ensure arrived safely.

Armando would be able to thank her later at a gathering or something.

Papaya made her way to the rental cagroo where she'd left him, still tied to a post outside the event's entrance. He lifted his head in recognition as she approached and cried out that strange noise between a mew and a whinny that cagroos were prone to making. He was happy to see her.

As she rode toward the north shore on her steed, she reached into her sack and got out her compact. Papaya tapped the glass on "autodial 1" and let it ring.

Papaya spoke the beginning of the pass phrase. "Bran."

"I dunno about that, Sissy. His food's not even up my alley. I was more betting on Msrah."

"Up your alley?" Papaya laughed. "Is that a joke? You should be careful with what you say, you know. You never know who's listening in." As if spooked by her own words, she checked over her shoulders for potential stalkers. After a quick glance, she was satisfied enough.

"Huh? Of course not! I wouldn't joke about something like that!"

"Well, you'll be happy to know, Msrah's food saved the day. Even if it didn't win." Papaya paused, then added, "I think Vera probably won't come back next year, either."

"Yeah. I'll tell you about it later." Papaya considered this for a moment. "Or not. It was kinda gross. I don't know if you'd want to hear, actually. But anyway, I'm headed up to the drop off now. I should be there in a day or two."

"Oh! That's good. I just sent the cargo off earlier today. I think you'll be waiting for a while. That's no issue, right?"

"Yeah, no problem. I have some special requests to collect in Citrico Capital before I head back up to Mew York, anyway. It's going to take me a few days."

"Don't forget. Sunset is when he said he'd open the dropoff point, apparently."

Papaya and her steed were nearly at the water. From here, her cagroo would start swimming to the next island. He was a speciality breed. "Yeah, got it. I'll make sure to at least watch out for that."

"You don't have to get close or anything. Lychee just wanted me to make sure that the cargo left Topside before rendering payment to certain parties, you know?"

"Yeah, yeah. I figured. Don't worry. Hey, did you need anything from the capital while I'm there?"

The voice on the other end was silent for a moment. "I don't think so." Another pause. "But it'd be nice if you visited me soon."

Papaya pursed her lips. She didn't have much against visiting, but… it was hard to pull off. She needed to constantly be tending to her extended family. It was important. She knew it.

Anana was probably frowning too. "I guess I'll get going. Be careful."

Anana fumbled with something in the background, then spoke once more. "Love you."

Papaya lingered on that phrase. The cagroo came to a stop right at the waves. He was waiting for her to signal that it was okay to start swimming.

But before she could reply, Anana ended the call. Papaya put her compact away and nudged the cagroo forward, beginning her trip between islands.