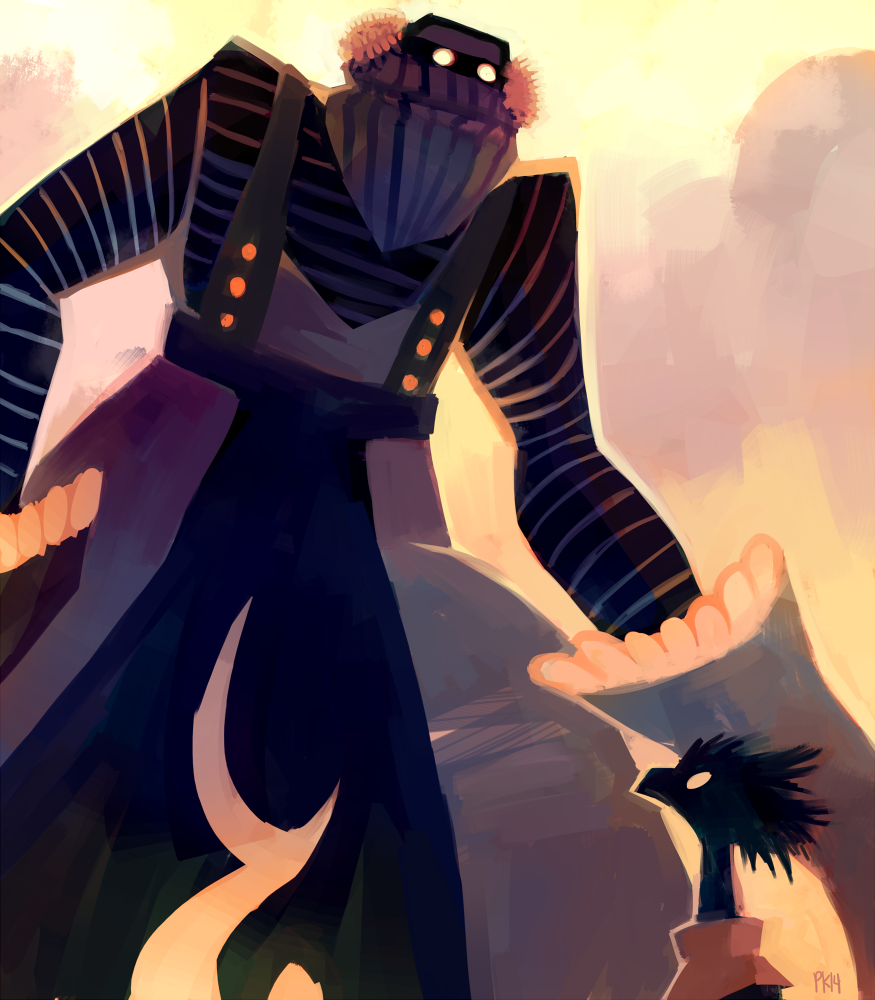 Aquila had trailed the boats from as far back as she dared, and after a week of having done so they split up and went their separate ways. She wanted to follow Anana's, but her instincts told her to do otherwise. The other boat, unmarked and flagless, was suspicious. Anana's boat had followed it in a defensive position for as long as Aquila had watched. Cordite and Anana, bodyguards? Escorts? Aquila was very interested. Who was that important? Why did Anana's boat leave? The closest island was Polaris, and that was still a week or so of sailing away.

Well, Anana was no longer there, so it was time for Aquila to find out. She took off her pirate outfit, revealing her harbormaster uniform underneath. There was not a single wrinkle or speck of dust anywhere on it, and the medals sparkled in the fog-filtered sunlight.

A moment later the sound of creaking wood filled the air. Aquila watched the parrot fly into the fog. The thing had taken Raphael nearly two weeks to figure out, but he did it, and they had tested it on other boats in the time between then and now. It told Raphael everything she wanted to know about them. Number of passengers, amount and nature of cargo, location and speed, even structural integrity. It was a great little spy. She was sad Raphael couldn't keep it.

She heard the parrot come back, and after minutes later Raphael came up on deck.

"It has told me nothing. The boat does not belong to Cordite."

"Someone made a replica? They're smuggling something. I'd bet anything on that."

"That is what I thought as well. I do not bet, however."

"Were there any weapons?"

The parrot could have checked for those, at least. It seemed programmed to squawk at any type of melee or ranged weapon in its vicinity, even if they weren't on one of Cordite's boats. They had sent it out at a fishing boat a few days ago out of curiosity, and the squawking was so loud they had scared away all the fish. The crew on that ship hadn't been very happy.

"No. The parrot says there are no weapons. There is one passenger on deck, and they are unarmed."

"I'm not wearing that crappy outfit anymore. You don't need to either."

"I wish to remove it later, before we make contact. It is fun to wear."

"Sure. Suit yourself. And keep up the fog."

Aquila drummed her fingers along the railing. The boat they had followed had stopped when they drew close, and even put out a walkway for them.

"You're certain there's no weapons?"

"The parrot said there were none."

Raphael sat down and closed his eyes. He went silent and stopped moving. After a minute, Aquila thought about pulling one of his feathers. Ten minutes later, he stood back up. He checked his clothing and ruffled his head.

"I didn't do anything this time."

"I still must check."

"Whatever. Was there anything?"

"There is one person on deck, as the parrot said. I could not see anything more."

"What? Nothing at all below?"

"I could not tell. I could only see the outside."

"I do not think so. I simply could not enter."

"You're sure there's someone on deck?"

"Yes. They are fishing."

"Fishing! Well, fine. They can fish all they want, but we've come all this way to say hello, so let's do it."

Aquila hesitated as she stepped onto the walkway. Someone she couldn't detect made her nervous. She hadn't encountered that before. She hoped Raphael was right when he said they didn't feel hostile. She looked back at Raphael.

"No weapons or magic?"

"The parrot and I detected none."

"All right. I'll be back. Keep an ear out for my signal."

She took a deep breath, adjusted her uniform, and walked onto the ship.

And out of the fog. Visibility on the ship was crystal clear. She watched as the fog outside swirled about and failed to get in. No wonder Raphael couldn't see anything.

She almost jumped as something off to her side moved. A figure seated on a cheap, plastic beach chair waved to her. They wore mittens.

They were there, but she couldn't feel them there. Nothing save her eyes told her this person existed.

"Took ya long enough! Was startin' to think you wouldn't come over. Woulda been a real shame, what with how long you been followin' me."

Aquila played the sentence back through her head. A male voice. The speech pattern suggested varmint. No discernible accent, though. Someone who lived among varmints, maybe. He either picked up their dialect or decided to imitate them.

He patted a chair beside him. It was much smaller than his, and showed signs of having been used.

"Come on over and sit down. We got lots to talk about."

"Yep. And that's a mighty fine set of cords you got there, friend. I know lotsa people that'd have half a mind to tuck tail and run after gettin' walloped with 'em. You oughta be proud."

He showed no response, physically or mentally, from the voice. None at all. She was disappointed. It had worked so well on Scrubber.

"I ain't gonna try anythin' funny. Specially not to an officer of the law like yourself. And like the fella keepin' watch on that ship of yours."

She tried another voice. If fear didn't work, authority might.

"Tell me who told you about us."

"I imagine that plays havoc on yourself after a while. No need for it. I'm not gonna lie to ya. Nobody told me about you two. Found out all about you myself."

He reeled in his line and checked the hook. Nothing was on it. He attached a piece of bait and threw it out with a flick of his wrist.

"Oh, nah, I ain't a simple fisherman, although I expect y'already know that. I do enjoy fishin', though."

"Why's the boat called the 'S.S. Catching Fish, Nautical Vehicle no. 1, then?"

"I built this boat, y'know. Thought it'd be a good name to give her. Do you think it a bad name?"

Aquila sat up and glanced around, startled. She was in the chair next to him. She couldn't remember when she did that. She was mad. She stood up and glared at him.

"Not comfy enough, I take it."

He leaned forward and attached his fishing pole to a stand on the ship's railing. Then he began to stand up.

It took him a while to do. He was absolutely massive, easily twice the size of any gnoll she'd ever seen. Weapons and magic aside, if he decided to cause trouble, she'd be up a creek without a paddle.

"I haven't introduced myself properly, and for that I apologize. I'm the captain of this here vessel, hired on for a safe and legal transportation endeavor. Put 'er there, fella."

He put out his hand. An invitation for a handshake. Not a trouble-causing gesture at all.

Normally she wouldn't have taken it. It was a bad idea to let someone you suspected of smuggling, or any criminal activity for the matter, get ahold of you. An even worse idea if they were as massive as this one was. But she did it anyway, and she didn't know why.

As he grabbed her hand, she felt it freeze, and knew her entire body would follow suit if she didn't get away.

She wrung out her hand and warmth returned to it. She was annoyed, but not injured.

"Tell you what, I got a proposition for ya."

"A bribe, you mean? You're a smuggler, and you're smuggling something valuable enough to get Cordite and whoever Anana works for in on it. You're going to pay me to look the other way, right? Forget I ever saw you?"

"It's true enough I'm secretly movin' somethin' out of Owel, but it ain't illegal. Guess you could still call it smuggling."

He picked up his fishing rod and stood up straight. Aquila was still astonished by how tall he was.

"Here's what I got for ya. I'll tell you what I'm doing here, and you can head back to your city. You don't have to waste any more time out here. Sound good?"

"I am transporting a citizen to Hellside for their own protection. One of your citizens. Your mayor ordered the job, and she requested the highest level of secrecy."

"She would have asked us to do it."

He shook his head.

"Can't tell you that right now, fella. I'm sorry. I know you were thinkin' this to be some kinda interestin' bust for you, what with Cordite havin' been a pirate an' all and Anana bein' an armed escort, but it ain't."

"Who told you all that?"

"That's no matter. You can come along with me if it'll make you feel better. Hellside ain't more than a couple hours away from here. I'm goin' down to the dropoff."

"The dropoff's a week away."

"For a normal boat. I built this one."

"Bullshit. I'm going to hold you here until we clear your story with the mayor."

He shook his head.

Aquila whistled. It would only be a minute before Raphael came to her side. They could hold the ship for as long as they needed.

There was a popping sound, and Aquila was back on her ship. Raphael was next to her. She felt dizzy.

"I only hung back so we could chat a little, friend! Didn't want you to think you wasted your time. Go ahead and ask your mayor about all this!"

Raphael waved his hands, and the fog cleared.

The ship they had followed for over a week now floated above the water, suspended in midair.

"Take my advice though, partner, and keep it between you and the mayor! There's a reason she wanted secrecy, and I don't think it'd be safe for you if you ruined it!"

"Come down and visit us anytime! Ask for me! Cover your ears!"

The ship flew away.

A blast of sound smashed into her with such intensity as to threaten to break her and her ship into tiny pieces. It didn't, though, and it was over as soon as it began.

His ship gone. All she could hear was the ocean.

"Officially, nothing. We took part in the treasure hunt, and went back home."