◀ previous by date ◀ previous in Interludes
next ▶ 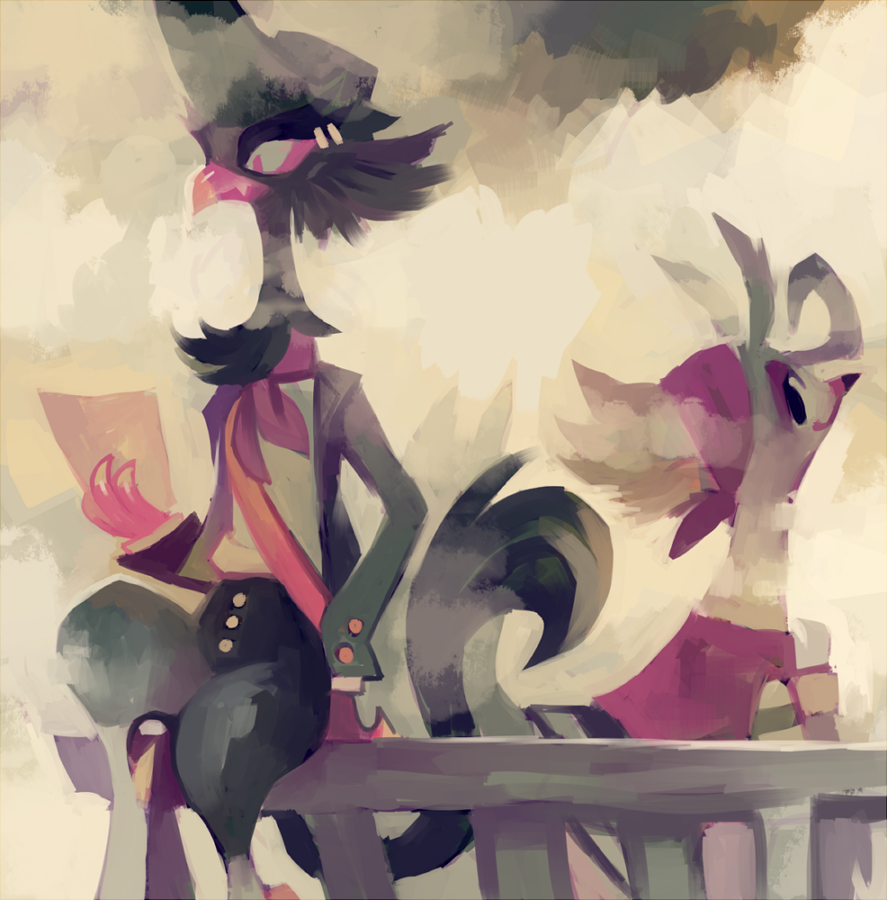 ◀ previous by date ◀ previous in Interludes
next ▶

"This is going to take me quite a while. It is not every day I encounter magic like this."

"How long's quite a while? Two days? Three?"

Raphael looked away from the parrot and grinned.

"Oh, I do not know for certain. Perhaps two weeks? Two weeks and a half?"

"All the other times never took you longer than a day or two, tops. Why's this one so special?"

Raphael looked back at the parrot. It floated in midair, immobilized, surrounded by a cloud of mist. He reached in through the cloud and prodded it, causing it to squawk and flap its wings before returning to its stasis.

"This is the work of two things, not just one. Before, all the things you had me look at were just the doings of one person. It is rare to see the magic of more than one person in this kind of things."

"I don't see why that would make it take, what, nearly ten times the amount of time?"

"If I could have seen both of the persons who worked on this parrot, it would only take me double the amount of time. But the second person is a mystery, and mystery makes this much more difficult."

"All right, then. We're in no rush. It'll take Cordite and Anana at least three weeks to do whatever the hell it is they're planning on doing."

Raphael nodded and walked into the cloud. Aquila pretended not to notice the way he stumbled every time the ship swayed back and forth.

"Please close the door when you leave."

"I'm going to be hunting for some treasure. We've got fourteen, seventeen days? I'll be upstairs making the most of them."

"What will you do if our boat is seized or damaged by the competitors?"

"The day a bunch of amateur treasure hunters overtake me on the high seas is the day I'm no longer fit to be where I am. Just worry about your parrot friend there and leave everything else to me."

She went upstairs, shutting the door behind her.

The port of Luxury was far off in the distance, too far to see with the naked eye. She and Raphael had set sail earlier that morning before dawn in order to avoid the crowd of contestants that would have shown up around noon.

She walked the length of the ship, taking note of everything she saw. The boat was in good condition. Cordite probably made it. It wouldn't win any competitions for speed or looks, but it looked as reliable as any other boat she'd been on. She took inventory of the supplies they were given. Everything was there and in order, save for the parrot; she had Raphael disable its tattle-tale enchantments and put it below deck to work on it.

She stretched and pulled out her treasure map. None of the listed treasures were far south enough for her liking. She had to get as far south as possible without attracting the suspicions of Cordite and Anana. Although, knowing Cordite, he was probably suspicious of her the moment she didn't head to Mew York once the opening treasure hunt ceremonies were completed. She didn't want to attract any more suspicions.

She pulled out her spyglass and scanned the horizon, and it wasn't long before she found what she was looking for. A boat identical to hers was off in the distance, struggling to keep straight every time the wind changed direction. She smiled and put the spyglass back. It was time to do a little trading.

"Raphael! Come out here for a bit!"

She heard a door below deck open and close, followed by the scratching of Raphael's claws as he hurried up the stairs.

She pointed at the boat she spotted off in the distance.

"We're going to take their map. I need you up here with me."

"Perhaps theirs will have treasures to the south."

She was glad he was clever. Perceptive, too. Always made everything easier.

The crew member grimaced. He had signed on for the contest because his friend, no, the Cap'n, had told him it would be fun. What the Cap'n failed to tell him was that it would be a pirate themed contest, and that it was going to be out at sea. He hated both of those things, which is probably why the Cap'n didn't mention either of them.

The crew member sighed, then pointed.

"That fog cloud is coming our way. If we don't move, it's gonna swallow us."

Not that they were navigating very well in the first place. None of them had any idea how to operate any boat larger than a rowboat, and they had never sailed in anything larger than a lake. The navigational equipment they were given came with instructions, but they may as well have been written in Gnawth as far as they were concerned. There was more math and geometry involved in navigating a ship than either of them had bargained for.

Cap'n squinted and stared into the horizon.

"Looks like we'll just 'ave to wait her out then, eh?"

"What are you talking abou- I mean, wotcha gettin' at, Cap'n?"

Scrubber turned around. Cap'n was right. The fog had picked up speed, and now it was upon them. The visibility started to go downhill and in under a minute, he could barely see Cap'n a foot away from him. Scrubber felt his heart sink. He pulled off his eyepatch and threw it on the ground.

"How do you know how long it's going to last? Neither of us have any clue what we're doing!"

"It'll be all right, m'boy. Fog as fast as this's liable to leave us as quick as it came."

"Oh. I guess you're right. Sorry 'bout that, Cap'n. Fog got ahold of my senses for a moment-"

There was a cracking sound. Their boat lurched forward, then stopped. Cap'n and Scrubber flew forward and crashed into the railing, then slumped down prone onto the deck. Scrubber tried to stand up, but couldn't. The fall had dazed him.

Cap'n didn't respond. He grabbed onto the railing for support and managed to stand up. He hobbled toward Cap'n and checked for a pulse. He found one. Scrubber breathed a sigh of relief.

"What do we have here, Raphael?"

Scrubber panicked. Something about the voice sent waves of dread coursing through his entire body. Whoever the voice belonged to, they were bad. Really bad.

"I am not sure, captain! It seems like we see an accident! May-be we perhaps should lend them assistance?"

That voice wasn't as bad as the first. It was foreign, almost comical, even. Scrubber didn't want to smile or laugh.

"Maybe we should. Y'think they got any money? To pay us for our time and generosity?"

He grabbed Cap'n and started to drag him towards the life raft. Scrubber didn't want to be a pretend pirate. He didn't want to look for treasure. He wanted to get away from the voice.

"Say, captain! One of them is trying to leave us! Perhaps they do not wish for our help? That is quite rude, I think!

"You think right, Raphael. And I ever so hate rudeness. Do you know what happened to the last person who thought it smart to be rude to me?"

"Oh boy, I sure do, captain! What a knee slapper, that was! We were picking bits of them out of the floorboards for weeks!"

Scrubber's heart skipped a beat. He dragged Cap'n the last few feet to the life raft. Or he would have, if the life raft was where it should have been. It wasn't. Someone had cut the ropes attaching it to the boat, and it was gone.

"You think we wouldn't have thought of that, Scrubber?"

It was that voice. It was quiet, and much closer. It knew his name.

"You underestimate me. I'm insulted, Scrubber."

Scrubber saw a hand reach out from the fog, a wicked looking hand that ended in razor sharp talons. He knew the hand belonged to the voice.

"That was very rude of you, Scrubber. I hate rudeness."

The hand grabbed his shoulder. He fainted.

Aquila looked at her new treasure map. Only one of the listed treasures was south enough for her liking, but it would do.

"That was a bit much, do you not think, Aquila?"

She rolled up the map and stuck it in her pocket.

"Hell no! They needed a lesson."

"They learned just how pitiful they are out here. They've got no business being this far out at sea with what little skill they have. They could end up getting killed."

"They will learn all that from your scare?"

She furrowed her brow.

"If they're smart, they will."

"If they are not smart?"

"Doesn't matter. I already sent for help using their parrot. Now we sit and wait for one of them to show up."

"Which one will it be, you think?"

"It'll be both of them. It'll look like they're more concerned with safety that way. When they get here, one of them will see that sorry crew back to shore. We'll follow the other one. Just keep your fog around and we'll go unnoticed."

"How will you navigate with the fog?"

"The same way I navigate without the fog. Which is a secret."

Aquila took the helm. She hoped she wouldn't have to wait for long.