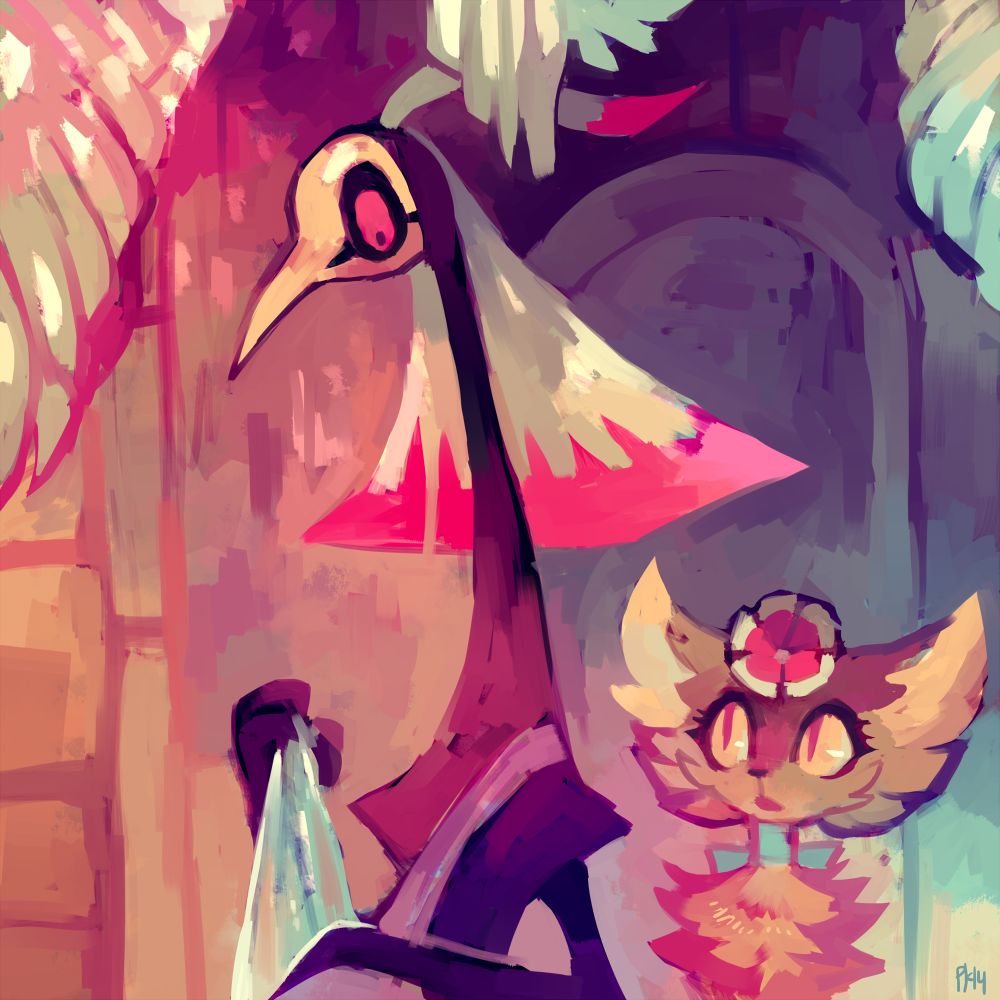 A series of knocks interrupted her note-taking. It was the correct rhythm of raps, so it was safe. Though, she still didn't understand why it was supposedly unsafe to begin with. Alas. Soon, she'd find out.

She closed her book and packed it into her small satchel. Every time she looked at it, really thought about it, it upset her. Her place back in Mew York had been filled to the brim with the figurines, books, and paintings she'd collected over the years… and overnight, her possessions had been reduced to what she could fit in a single satchel. And that was it. For the rest of her life. She hadn't even been able to enjoy seeing Dewclaw for the first time, or to explore any of the shops right there in West Luxury.

The knocks at the door, again, quicker and louder this time. Same rhythm. She figured Anana must have been getting pretty impatient with her. Or maybe Anana was worried. Or both. That was the likeliest.

"Yes, coming." She finally approached the door and looked out the peephole into the dim alleyway. It was indeed Anana.

As soon as the door was opened, the flowercat sighed with relief, and then spoke. "Professor! I was starting to think something or someone got to you!"

"No. I was just writing." To say she was merely writing was an understatement. She was mentally retracing her last actions, experiments, and notes. She was madly and frantically scribbling every single item that came to mind, anything she'd done or thought in the past days, weeks, months. No one had told her why this relocation was necessary -- only that it was necessary. She was hoping to figure it out before arriving down below and in the process had already filled several journals since their little journey had begun.

"Well, please don't scare me like that! Oh, and don't forget my cloak." The fucking cloak. She'd love to forget it, shred it, burn it. Or forget it. Equally fitting.

"Right. I have it." She patted her bag, then slithered past Anana.

"Hey! Please, could you put it on? It can't work its magic otherwise, you know?" Anana smiled. This grated at the professor's nerves because it didn't appear to be fake. Anana had been very kind and as accommodating as she possibly could have been during the trip so far, even going out of her way to buy more journals for the professor, but…

She sighed. "Okay." She opened up her purple satchel and retrieved the sparkling, translucent garment from within. It was a real marvel, an absolutely exquisite piece of magic. But she hated it. It filled her entire being with a sense of dread. This tiny piece of fabric threatened to undo her very existence, she was sure of it.

Huh. That was it, wasn't it? That was… that seemed familiar. Wait. What was it, again? Some faint memory was being tickled, but it evaded her and then fizzled out. Drat. She needed to write about this as soon as possible.

Undoing existence, she noted to herself. Remember that.

"Professor! Please hurry, I need to deliver you." Anana looked up, eyes pleading.

"Here." The professor quickly slipped it on and the horrible, familiar sensation permeated her core. Did she even exist? "I'm fine. See? A couple of seconds won't make a damn difference here. I doubt anyone even noticed I'm gone." And she meant it, too.

Anana remained silent for a moment and looked sheepishly at the ground, then spoke in a tone eerily ominous for someone who had been so genuinely cheerful the past couple of weeks. "I wouldn't be so sure about that."

It was hard to reconcile how the cloak made her feel with what Anana had just said. No one could notice her. No one noticed her with this. She was a living ghost with this thing. Could someone have really noticed her absence from Mew York? It… it made no sense. She…

This cloak. This cloak was damn strong.

"Professor, please." Anana spoke gently. "I know this is hard. I'm sorry. You won't have to wear it much longer."

So the girl knew. But… of course she'd know. This was her cloak. Were these feelings common? Were they what you had to struggle with in order to harness the cloak's powers?

Or was it easier if you actually possessed an affinity? Or if you were naturally gifted at handling magic?

She pondered these questions all the way to the dock, and then ended up feeling a terrible amount of pity for Anana. It was likely that they would never speak again, but in that moment, she could not have felt closer to understanding Anana. Would this feeling linger, or pass? Was it something like… like what she'd heard about individuals who underwent traumas together? Experiencing this cloak was something definitely akin to undergoing a trauma, she figured.

Anana didn't speak as they approached the dock with the single boat along it. A single passenger was waiting for her; she instantly understood that he was a demon after her top eyes got a good look. This should have been obvious, given where she was to end up. Would she learn anything interesting by staring him down later? She was unsure. Something was weird about this particular demon, and it wasn't how absurdly tall he was, nor was it how overdressed he was for the weather.

Something was off about him, though.

Anana called out to him. "Hello! We're finally ready. I apologize for the wait. I've had to be extra careful."

"Hello, friends. You actually got here just in time. Boat's ready to go." He patted the roof of the boat's cabin, which struck the professor as absurd. This boat did not seem equipped for someone of his size. "And if you two don't mind, I'd like to get goin' sooner rather than later."

"Understood." The professor was more than ready. As she slid across the dock and went to board the boat, the tall guy spoke.

She paused, looking down at the troublesome cloth. If he hadn't said something, would she have even remembered? Something was off. "Right. Apologies. My mind's a little clouded."

Anana grinned sympathetically as the garment found its way back to her. "It's okay, Professor. I almost forgot, too." Something was really off.

Finally, she made her way onto the boat, sans cloak. Her journey was half over. Approximately. Probably. Who knew, really? The spatial planes were weird in Hellside, though she'd never gotten a chance to experience it firsthand.

But, of course, that was soon to change.

As the tall guy prepared the boat to leave, he called down to Anana. "Be careful with that thing. Don't overdo it." No kidding. She didn't know how Anana could stand using it constantly when even once was enough to crush the professor's soul. Each subsequent usage felt like a heavier burden to remove. How did it feel to Anana, whose usage count must have been around at least a hundred?

She didn't want to imagine how that felt.

Anana paused to look up at them both once last time. "I won't overdo it. Thank you."

As Anana walked off, the professor felt irreconcilable grief. Logically, she was reasonably sure that it was only a side effect of losing the garment. Emotionally, it felt like she was incomplete, never again to be whole. She had to try to settle down. It would help to get out her current journal in order to document these feelings.

Magic was so bizarre, sometimes. It was always hard to tell what was really you and what was just the result of some greater force than yourself, tugging at you in unseen ways. This was why the professor applied herself to research. The influence of environmental magic was endlessly fascinating, though it often left her mentally exhausted. She moved into the cabin and coiled herself up -- her preferred pose for long bouts of writing.

The tall guy leaned in front of the door, peeking in. "If you need anything, let me know. Can't promise I can do it, but it doesn't hurt to ask. Never hurts to ask."

She peered at him for a moment. Something was really weird. She knew she'd been thinking that since first seeing him, but why? Something just had happened, hadn't it? Something.

"Thank you. I should be fine, but I'll heed your words if not."

He nodded in response, then left her to write.

He was so strange. She didn't even know his name, if he ever had one.

She wrote quickly. What was strange? Something just stood out. What was it? Backtrack. She felt loss. At what? The garment, or Anana? Both. What before that? She almost didn't give it back. Why? It made no sense. She wanted to give it back, and almost forgot. Anana too. Anana shouldn't have forgotten. Anana almost didn't notice her, when Anana was the one wearing the only other clothing to cancel out the effects of the cloak-thing. Why?

That only happened as they approached the tall guy. But why? He was a demon. That couldn't be the reason. Being a demon didn't mean canceling out magic. Was it really canceled out? Or was it something else?

Wait. What else happened? How did she remember to give it to Anana, then?

It was him. He reminded her.

How could he have even noticed her? He noticed her, but Anana nearly didn't?

That didn't make sense. Which made it interesting.

As the boat picked up speed and headed down near the Citrico Archipelago, she made her way to a window that allowed her to peek out at him. His back was turned toward her, which she favored. If she were going to be staring at him and gathering information on him for hours, it was preferable that he not notice or pay attention. So, back turned? That was great. It would give her an evening of uninterrupted writing time, and thus an enormous amount of new material to review.

By the time he stood up and (as a result) broke her trance some hours later, it was too late. She had filled over a hundred pages. Normally, that would have been good. Normally, she would have been able to look down into a treasure trove of information previously unknown to her. Normally, it would have become more and more interesting with every passing page.

This time, however, she was instead met with looping scribble and marks and dabs and dots and it was all absolutely unintelligible. It was not even close to any sort of written system in existence, to her knowledge. Looking at it made her feel a little nauseous.

She supposed she would put it away for now and go to sleep. Slithering deeper into the boat, she escaped the light of the moons and embraced the darkness below. She dreamt vividly that night about things she'd once forgotten in places that were long gone, and in the midst of it all was a lone island with a single inhabitant.