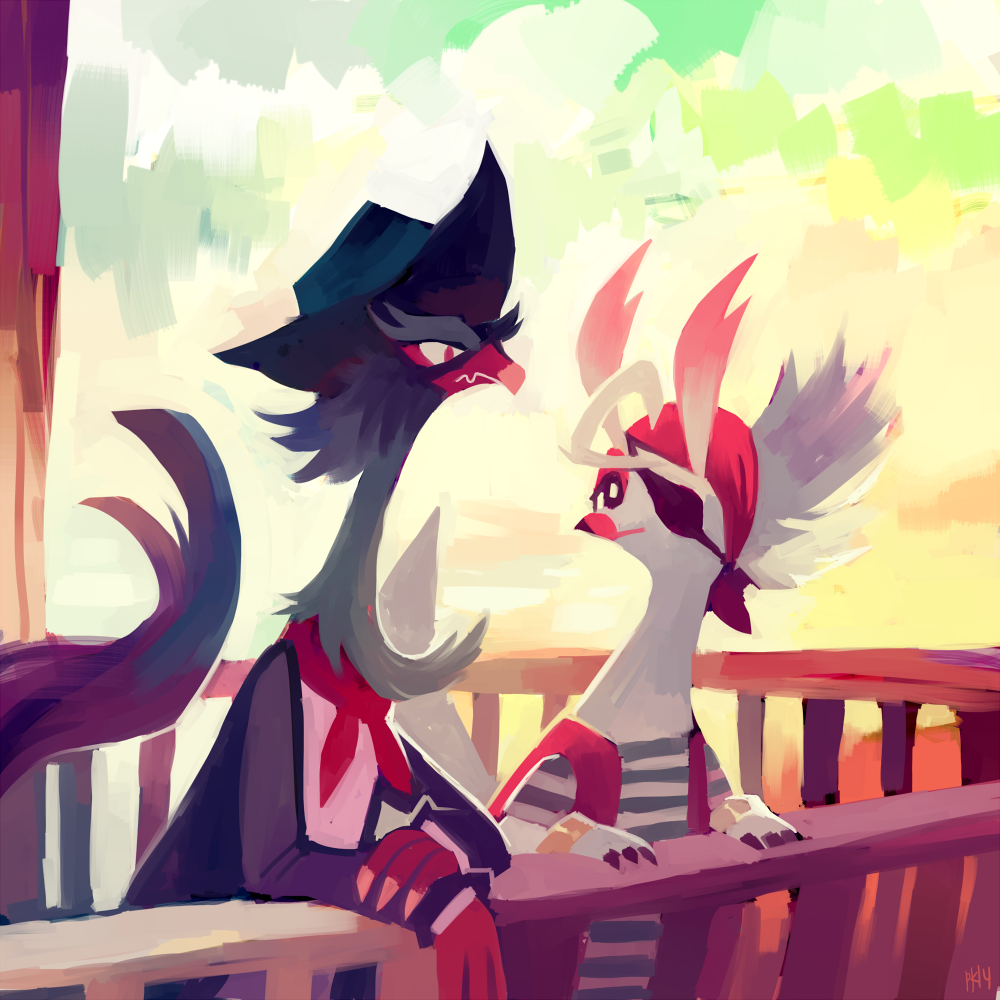 Story by Marl this time

"You are taking this a bit too far, are you not? It is nice you were in such high spirits for the crowd back then, but..."

"But what? I hate when you trail off like that. Get to the point and say it clearly. Don't dally."

"Do we not have to return to Mew York?

"Our job is to protect the people of Mew York. We can do that here. We will be doing that here."

"During a treasure hunt competition, out at sea?"

"I was being figurative there, to sound cool."

"What is your point, then? Will you tell me clearly?"

"There's someone here who should be lying low for a while, and yet they're not doing it. That bothers me."

"You are speaking of Cordite? He is a pirate no longer, Aquila."

"If it were only Cordite, I wouldn't be bothered. But it's not. It's his assistant. Anyone who knows Cordite knows he doesn't have assistants. Can't tolerate them. Yet here he is with one, acting all cheerful about it. Why?"

"Perhaps he is in need of a helper. It is a large competition, and two bodies are better than one for this kind of thing."

"He doesn't need help. He can oversee this whole thing on his own with those damned parrots of his."

"The assistant is not here to be an assistant. She's using the title as a cover for something else. What's more, Cordite knows her well enough to not be pissed off about having her around."

"Could she be paying for help? Money always tends to cheer people up."

"Maybe. Cordite doesn't go in for normal pirate currency, though. It's why I never arrested him. He never broke any of our laws."

"What an interesting concept! A lawful pirate!"

"Why do you care about the assistant paying for a lawful citizen's help? Is she a danger to Mew York?"

"So we participate in this month-long contest for, why?"

"Where have you seen her?"

"I've never seen her before today."

"May I say, then, I see no reason to remain here?"

"You may. But we're still staying here. Go get our supplies and get back here. We've got a lot of work in the coming month."

"On the double now, scallop."

"It means hurry up."

"Oh. All right then, captain! Doubling up!"

Aquila sighed as she watched Raphael get off the boat and head down to the supply stations. The sun was setting. They had waited for the initial surge of contestants to be processed so they wouldn't have to wait in line. Raphael would be back in an hour, tops.

She didn't want to explain to him that the assistant's presence unnerved Cordite, and that on some level, the assistant disturbed her as well. She had to always appear relaxed. Calm.

Cordite was supposed to be enjoying an early retirement. She knew he wasn't lying about that when he mentioned it.

Cordite was acting like he was merely overseeing the competition. It was a convincing act. Maybe he actually would do that. But it would be in addition to something else. She could feel it. His... his something. His aura? Sure. Aura. His aura told Aquila that he was back in the pirating business, if only for a little while longer.

Cordite being friendly around Anana wasn't an act. That meant it wasn't Anana herself who disturbed him. Rather, it was what Anana stood for. What she represented. It took a lot to make someone like Cordite nervous. He had faced down countless other pirates and militia ships in his time and always came away the victor. Anana was part of something better than those things.

If Anana weren't familiar, Aquila wouldn't have bothered. She and Raphael would have been on the first caravan back to Mew York, and she wouldn't have given Cordite and Anana a second thought. But Anana was familiar, which implied some kind of connection to Mew York. That was all Aquila needed to justify an investigation.

She adjusted her captain's hat and readied the ship for departure. Raphael would be back soon, and they had a lot of work to do.