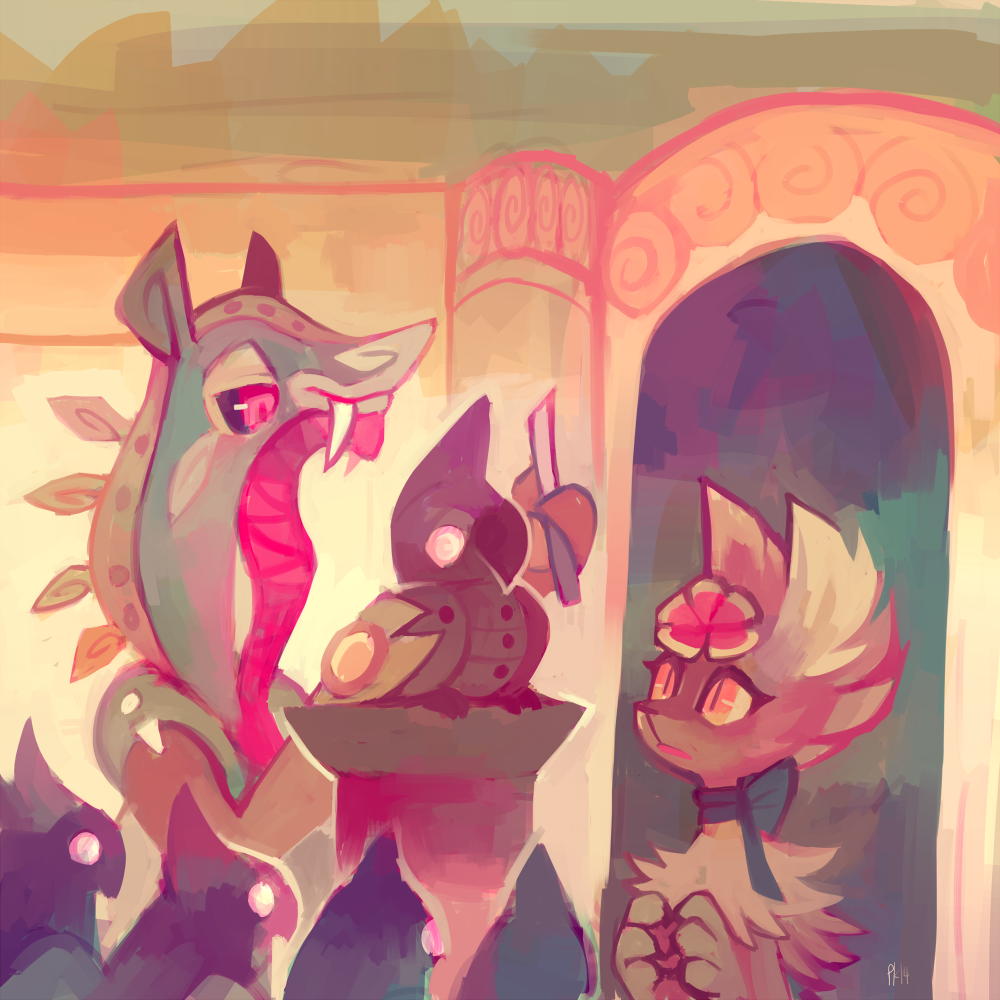 CHK! CHK! Another piece of the wooden parrot's head fell to the ground, adding to the large pile of debris from the past dozen or so carved. Cordite was on a roll. If he kept up pace, they would all be done before the night's end crept upon him. Honestly, he was a little annoyed that he had to go through the trouble of making any more. If only his last excursion hadn't left them all blown to smithereens, he'd have a little more of the sunstone eye pieces left.

Alas. The reward for running the treasure hunt was well worth the loss of the sunstone. It wasn't the reward paid by the Luxuries, though. No, it was the secret reward, the one he would receive under the table, discretely, away from any prying eyes. Hell, that reward was even worth the loss of most of his hoard. Not that he'd want to lose any of his hoard, mind you, but if he had to make a trade…it'd be a done deal in moments, no regrets.

In this instance, he was only trading a month of his time. Sea dragons could live for centuries if they were careful, and Cordite did his very best to maintain care in that regard. He was barely touching half a century, and was rather looking forward to what the coming decades would offer. A month was nothing, especially with his foresight keeping him out of harm's way.

Finally, he heard the creak of the steps approaching. The flowercat had almost found her way. He could hear her in the hallway. "Hello? Which room are you in, Cordite?"

Cordite turned to face the door. "Over this way, missy. In here."

As she entered the room, she started to speak. It was the beginnings of a "hello," he assumed, but it never quite made it beyond a gasp. Across her face briefly flashed a series of emotions: bouncy politeness, alarmed recognition, confusion, and then, finally, slight annoyance. Cordite smiled a goofy grin. "Hello to ye, too, Ananers. Don't look too happy 'bout seein me, or they'll think somethin's up."

"I don't understand. They said…" she said, then stopped, considering something.

"Finneus? Why are you here? Your name isn't Cordite! Right?" She was starting to sound a little alarmed and frantic.

"Well, it wasn't, but now it is." Switching names was pretty common after retiring from certain lines of work. Piracy was usually one of them, even if Cordite had never done anything particularly illegal. It was still better safe than sorry. Besides, changing one's identity was kind of fun. It kept your enemies on their toes. And your friends, he supposed, judging Anana's expression.

"Did you kill the real Cordite? What's going on here? Don't drag me into any trouble! I don't want that! I can't be mixed up in that right now! Finneus!" She was almost pleading with him, now. Poor thing.

"Nothin' like that, lass. I'm just the one runnin this event, and you're helpin'. Ain't much more to it than that."

"...seriously? But… how? And why are you talking like a pirate caricature? I thought you hated those."

He frowned a little. "Well, yeah. Normally. But it's kind of part of the identity change thing."

She pursed her lips and stared right at him for a moment, incredulous. "No one looks like you. No one. One good look and anyone who's ever known you would recognize you, even with the new coat of paint."

She was right. But, it didn't matter. "Yeah. It's kind of a work in progress. Anyway, we need to get started on… everything. We need to get applications going, we need to gather all the supplies, and we need to actually place all the treasure."

"Okay. I don't actually know anything about what you're going to need from me, so if you could fill me in…wait. Why are you here?"

"Ain't you heard me the first time? I'm runnin' this event. You're helpin'."

"You don't need anyone's help. I thought they were going to get someone who would actually need help. I have things I need to do that have nothing to do with this hunt, Finny. Are you going to stand in my way?" Point blank. She wanted to get right to it.

"Cordite, not Finny. Call me Cordite. Don't want no one gettin' the wrong idea 'bout our chumminess, do you?"

"That's better. Anyway, no. I don't intend to stand in your way. But I also ain't helpin you. You got that? You're helpin me, cause that's how it goes and that's what you should do. If you're not, then wandering eyes will fall on ye, 'Naners, and that wouldn't be so good for either of us law-abiding citizens, would it?"

Cordite laughed and went back to carving away at the parrot's final head details. "Oh, you know. A bit o' treasure."

Anana lingered in the doorway. "That's neat, I guess. Who's paying you?"

"Why, the fine folks of East and West Luxuries! You oughta know this."

"No. Who's giving you what you're really after, here?"

"Why, same folks you know rather well. It's why you're here, after all."

Anana crossed her arms, scratched her chin, and looked up at the door frame. "Yeah, I suppose I figured as much. I just guess I expected someone who wouldn't know what was up. It's easier this way, but it also seems… I don't know. Risky. Did they have any idea?"

"Any idea about what? Me already knowin' you?"

"Yeah. I can't ask them. Someone might hear about it."

"I don't think they had a clue. I figured you'd want it that way."

There was a silence, broken only by Cordite chipping away at the wood. As he finished the last of the details on that particular parrot, he remembered earlier.. "Oi, what were you doing down next to the boat 'fore you came up here? Nearly forgot to ask."

She looked startled anew. "That… that was something. A real creep tried to pull some moves right before I made it to the dock. I never heard him coming. It was just… weird and annoying. I was trying to talk my way out of it, but it didn't work very well with this guy. I felt like I was kind of getting sucked into his pace, so I had to use plan b." She then fell into an uneasy quiet. Cordite felt a little bad for asking.

"Them's the perils of traveling alone, I guess. At least you shocked the little scallop good then, I hope."

"Hope you're saving some of that juice for the event."

"You still do that thing with your tail, right? The venom thing."

"Yes… but what are you suggesting, exactly?"

"Well, I was thinkin, just in case we got some rule breakers, it might be nice to try out this new thing I was plannin out. Really though, I only thought of it after I knew you'd be my helper. Normally I'd just have the parrot break the ship."

"This time, it might be kind of flashy if say… a major rule breaker got their ship lightning'd up."

Suddenly, she got it. "Really? Doesn't that seem a little… excessive? If you don't even need me to do that, why do it? I don't really want to reveal this ability without good reason. It's kind of my last defense against… you know. Certain individuals."

Cordite had forgotten. It was hard to tell how much of Anana's self needed to be hidden at any given time, but he at least thought a power so striking as hers would already be open to the world. Still, it was worth asking. "Well, I can just say it's how the ships are built. You wouldn't have to do nothin but jab my parrots with that tail o' yers. They'll fly to the top of the ship and touch a certain pole when they want to call lightning down to sink a ship. Yeah? This way you're not doin anything anyone can see. It'll already be done, just in case."

She wavered a little. "That seems dangerous."

"Piracy ain't for the faint of heart. 'Sides, this is only for those who deserve this sort of danger. This is for those who break the most important rule, so really."

She sighed. "Okay. Finny. Cordite. Whatever, I don't care I guess as long as no one knows it was me. Can you assure me that? I can't do it otherwise. My safety depends on others not knowing."

"I swear on me pirate's pride, I'll say it was my own power, or an artifact, somethin. Yer the best, Ananers."

"I shouldn't be doing this."

"But it'd look really cool, you know it. And they'd be a lot more reluctant to seriously harm any of their fellow treasure hunt participants if I got to say, "your ship will be smote by the heavens if you kill anyone" -- y'know? Got this… ring to it. Especially the "smote" and "heavens" part. Real cool."

Anana gave him a sidelong glance and then rolled her eyes. "That's utterly unnecessary, but fine. I guess everyone's going to think I'm just here for some administrative stuff anyway, so it shouldn't matter."

"Yep. It's pretty great." Cordite caught Anana shaking her head out of the corner of his eyes. Whatever. She'd get into the mood soon enough.

"Hey. What's your compact info? I need to add you so I can dial you later."

"Oh. I don't got one of those fancy doodads. Not befitting for a free spirit like me." Compacts were interesting, but Cordite hadn't felt like blowing any of his hoard on one when Kadath and Gloam just kept coming out with newer and newer ones all the time. He wanted to wait until they were a little more streamlined, truth be told. And also, like he'd said, he was a free spirit, not bound by instant communication. Being able to talk to anyone from anywhere was cool, sort of, but it also meant that you could be bugged by anyone from anywhere. That was less cool. However, Anana's expression told him everything he needed to know about his future with compacts -- no fortune-telling needed, in this case.

"Seriously? I'm not dealing with that. I'm getting you a compact. We need to be able to talk wherever we are, and I'm not just sticking by your side all the time. I have things I need to do."

"You will," she retorted. "I mean, if you want that stupid lightning effect, anyway."

"Ouch, you trying to bargain with me? That's rough." He feigned sounding hurt, but she paid him no mind. He knew what she'd say, and it was a fair trade off. If she made a sacrifice that had the smallest chance of putting her in harm's way later, then it was worth him making a sacrifice of his time in order to help her when she needed it. If she needed it. And if he could help.

"There's no bargaining here. Anyway, I'll be stopping by later to show you how it works. I need to go pick one up from the city. They can do a lot of things, you know. Set alarms, calculate, take notes… compacts can do quite a bit for you. Especially if you're often on the move."

Cordite exhaled an exaggerated sigh, and Anana looked unimpressed. She left wordlessly, and Cordite hoped he hadn't annoyed her too much. He only wanted to heckle her a little. Really. After all, he had another month and a half left with her, and didn't want to wear her out early on or anything.

But he'd see. His fortune for the next couple of months looked good, so he wasn't particularly worried.