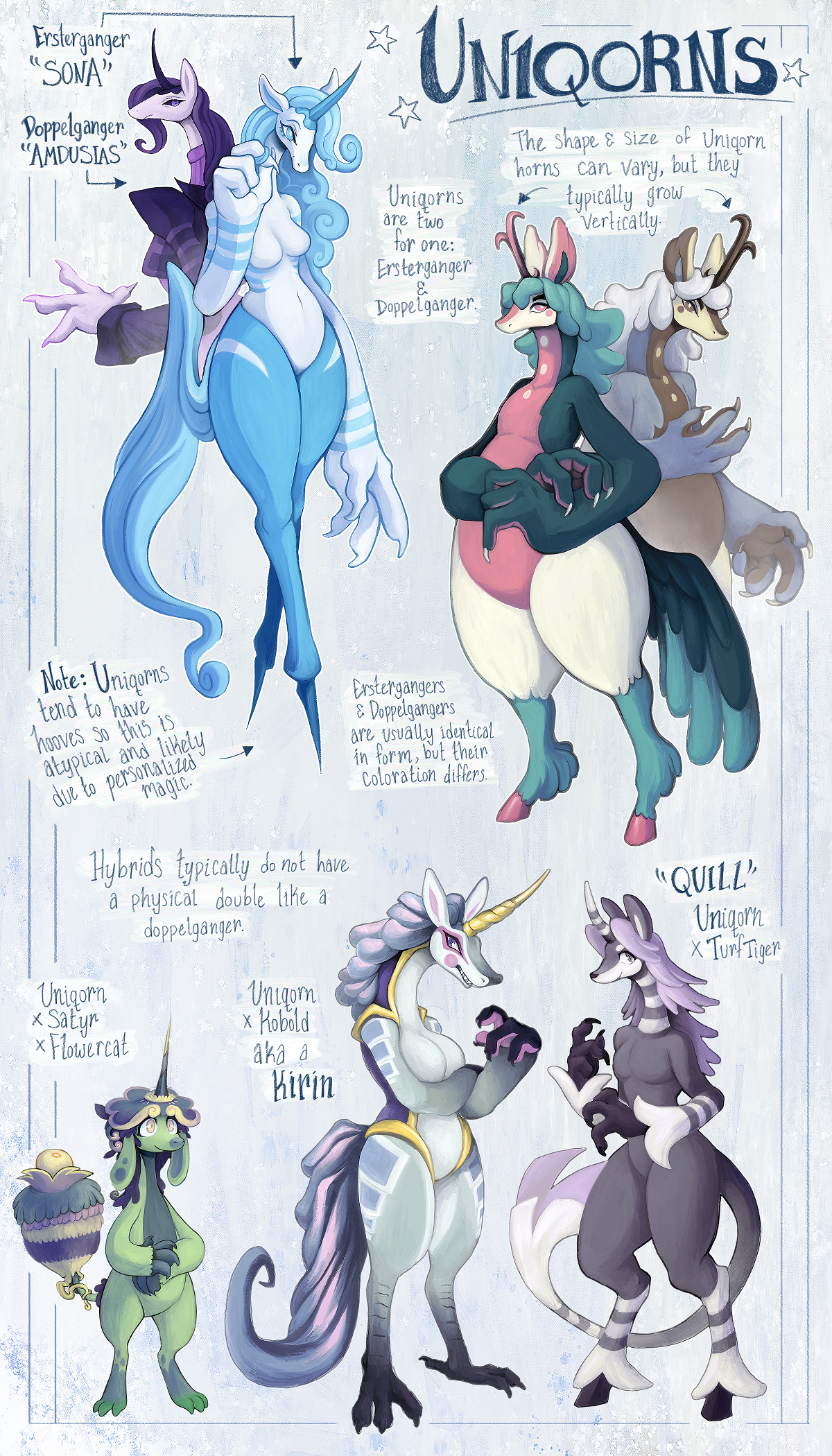 Typical Info: Uniqorns are bipedal, typically tall, hooved, and have long arms with large clawed hands. They tend to have flowing hair with a matching tail, markings (like stripes) are uncommon but not unheard of. Hybrids are more likely to have markings akin to what their non-Uniqorn parent had. Uniqorns may have wings naturally, but this is also uncommon.

The state considered by most to be the "actual" Uniqorn is called an Ersterganger. Erstergangers are typically pacifists and do everything to resolve conflict without resorting to violence, (which, in this context, is considered an act of doing harm, either physical or more abstract like emotional/mental).

There is not a lot of thorough study regarding what occurs when one half of a Uniqorn (Ersterganger or Doppelganger) dies. This appears to be very rare, so research is rarer still, but from what little is known, Doppelgangers who exist without Erstergangers claim to feel a deep hollowness and Erstergangers without Doppelgangers seem to go through a lot of change until a new one forms.

Uniqorns can pick up unusual information related to their interests or feelings in some way when using their hands, typically via touch. The information a Uniqorn gleans from this ability is unique for each one, and while it is typically invoked via touch, the exact method also seems to vary per individual. Hybrids also tend to have a sensitivity in their hands that allow them to intake particular information to a light degree.

Uniqorns are unusually adept at learning specialized magic relating to their interests. For example, a Uniqorn with an interest in music shall pick up music-based magic quickly. This magic is manifested using their horn. When removed, the horn does not grow back and the Uniqorn's magical prowess is lost. The horn seems unrelated to a Uniqorn's touch ability however, though its relation to one's Doppelganger is unknown.

Doppelgangers tend to have the exact markings/patterns as the Ersterganger, just with different coloration. This typically applies for scars and loss of limbs as well (e.g. an Ersterganger losing the tip of their ear will result in that for the Doppelganger as well).

It is unknown where Doppelgangers reside when not manifested, though it has been theorized they may reside within other frequencies.

What constitutes a "violent" situation varies for each individual Uniqorn. Some that are much more conflict-avoidant may call upon their Doppelganger frequently, while others who have highly self-defined ideas of "unresolvable violence" may never call upon theirs.

Hybrids of Uniqorns typically do not develop a fully manifested Doppelganger, but the ability may be present in a changed way... like a separate mentality as opposed to a fully separate physical self.

Kirins (Uniqorn x Kobold hybrids) are an important subset of Uniqorn, though research regarding these must be further verified before being shared.