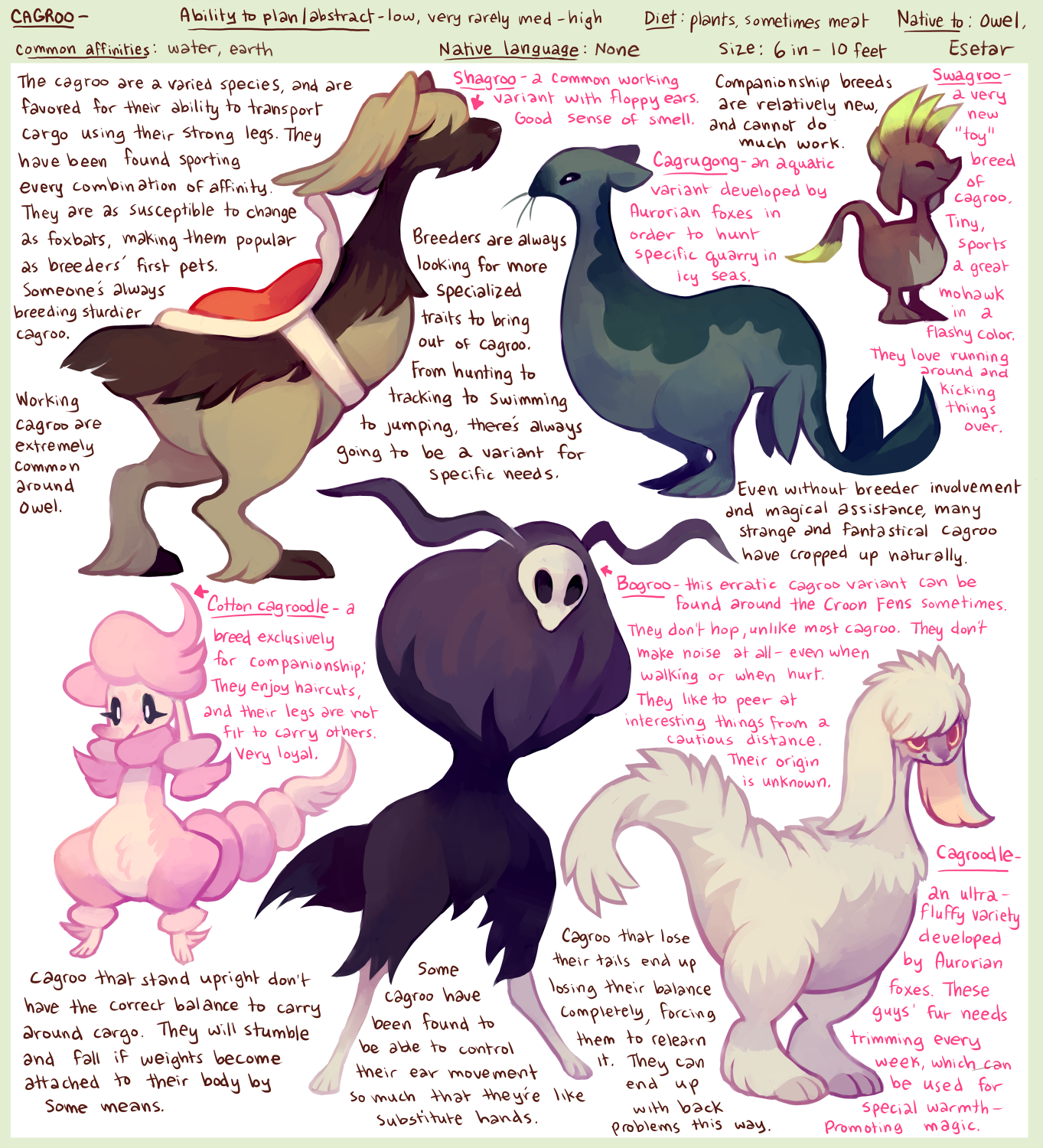 Thanks to exty for designing four of these!

Notes: It is important to keep in mind that the details in this document refer to the many types of Cagroo found on Owel, nearly all of which are the result of specialized breeding. Wild cagroo will be discussed in the "Trivia" section at the bottom of this document.

Notes: By far the most popular types of Cagroo when it comes to show and companion breeds. When not for show or companionship, Earth-type or Water-type Cagroo are bred as all-purpose land or water beasts of burden.

Notes: Due to the expertise needed to breed specialized Cagroo, they are usually found in jobs requiring a very specific skillset. For example, Lava-type Cagroo are commonly found near Polaris, and are able to work in extremely high temperatures and walk over hot surfaces (some Cagroo can even walk over lava, if their genetics are good enough!)

Notes: Some Cagroo breeders are interested in testing the limits of what Cagroo genetics can do. Researchers in Kadath and other magical places have dabbled in creating Cagroo with strange combinations of affinities, usually with the goal of inducing Spirit or PSI in a Cagroo. These research Cagroo are not sold to the public, and most individuals on Owel will never see them.

Notes: Weakness depends on the type of Cagroo, as well as how genetically stable the Cagroo's genetics are. A Kadath research Cagroo with, say, three elemental subtypes would be far more susceptible to the negative effects of any element than a run-of-the-mill Earth-type Shagroo would.

Notes: The more purebred a Cagroo is, the more resistant they usually are to their own element. This comes in handy for the working Cagroos, when extreme elemental resistance is needed, such as in an active volcano or an icy tundra.

Notes: The ease of which genetics influence the physical and mental makeup of a Cagroo is the main reason they're so popular among breeders. With patience and dedication, you can design yourself a Cagroo exactly to your liking. (Within reason, of course.)

Notes: Cagroo were introduced to Owel several centuries ago, and nobody remembers what the original Esetar Cagroo look like.

Notes: Most genetic and elemental research done on Cagroo in Kadath was halted when intelligent, talking Cagroo began to appear. It is unknown if wild Cagroo can be like this.

Notes: Due to their adaptability, friendliness and popularity, Cagroo can be found everywhere on Owel.

It is unknown if the first Cagroo initiated contact with other races for companionship or vice versa. It doesn't matter too much, as Cagroo are very popular and eager to be surrounded by people.

Wild Cagroo can easily carry one medium-sized passenger, and will often offer rides as long as mutual trust is present.

Most Cagroo can learn to understand speech, such as simple words, phrases and gestures.

Highly intelligent Cagroo were discovered on a recent expedition to Heaven's Keys, although they did not want to interact with the researchers. These Cagroo became extremely hostile when the researchers continued attempts at communication, and chased the researchers away.

Wild Cagroo most often have affinities which match their current environment. These Cagroo are sought after in order to introduce new genes and affinities to existing domestic Cagroo types.