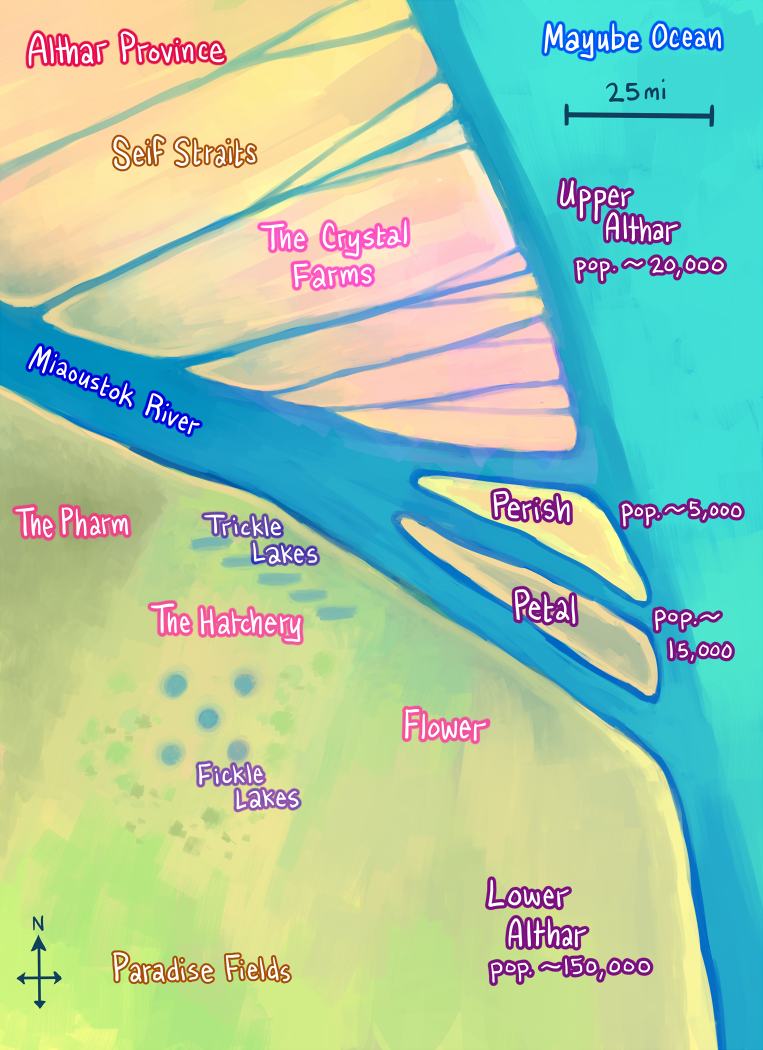 Location of both the Seif Straits and The Crystal Farms. There's not much in the way of housing individuals - despite the straits offering water all throughout the land, the temperatures are too extreme for most individuals during the day, so most working (and living) in Upper Althar is performed during the evening when it's substantially cooler out.

The Seif Straits - All throughout Upper Althar are offshoots of the Miaoustok River. It's pretty unusual for a river to break off along the land like that when there's an easier path for the water to follow, but the Magnetic magic in the Seif Straits attracts equally magic water from the river!

The Crystal Farms - But what can you do with magic water, exactly? If nothing else, you can bottle it up, drink it, and slowly gain an affinity (or a secondary one, if you already have one). You can also filter the magic pretty easily at that point. But, actually… the straits do something pretty fantastic outside of supplying magic water: they create magic crystal fields. The crystals on the surface aren't nearly as useful as those that form in the earth around the straits, and the further away from Perish you get, the less you're going to find Spirit or any secondary elements in either the water or the crystals. And, of course, you can't have a bunch of rare magic in an area without someone important stepping in and blocking off the best locations for harvest. Oh well. At least you can still find precious metals out in the straits if you're good enough.

Delta Islands - Refers to Perish and Petal, collectively. Technically neither part of Upper nor Lower Althar. These two islands are what most individuals think of when "Althar" is mentioned.

Perish - Spiritual capital of Owel… or so Althar asserts. Whether you want to learn all about the afterlife, or you just want to learn more about the nature of Spirit magic and its uses, Perish welcomes anyone who comes in peace. Beautiful buildings adorn the land: places of worship, of study, of life, of death. Perish is also home to most of the skilled workers of Althar - particularly those trained in religious/spiritual arts, and those who work with crystal and glass. Relatedly, Perish is also where the best crystal hauls end up.

Petal - Traders' capital of Owel… or so Althar asserts. Well, while it's probably not the biggest trading spot on the continent, it's definitely one of varied goods. And magical goods, at that! In competition with Dewclaw for the least-secret black market, Petal is home to all manner of probably-definitely-contraband goods. Body parts, cursed artifacts, the eggs of endangered beasts... it's all here, and all available to the right buyer for the right price. Also, anything harvested in Lower Althar is bound to be here, and fresh!

Largely the residential zone of Althar, as the heat here is only "pretty awful" compared to Upper Althar's "absolutely horrendous". Despite that, Lower Althar workers manage to feed a large portion of Owel with food grown or raised here.

The Pharm - Growing plants and raising animals isn't always just for the sake of eating food! Sometimes you need to grow things with medicinal properties -- from a flower whose petals relieve itching, to a cotton lamb whose wool will help one achieve a higher state of meditation when worn… The Pharm is the place to find strange varieties of flora and fauna that make your life more convenient. And, yes: the famous Althar cotton is indeed grown here. Dyes, silks, etc are also produced here, right alongside paper and ink.

The Hatchery - Not every animal can be grown from a seed and kept in a pot! The Hatchery houses many varieties of critters, most raised with the express purpose of later being consumed in some way. Though, pets are grown here too! Can you say… "pet bookwyrm"?

Fickle Lakes - Large artificial ponds that are used to grow aquatic life that probably wants to kill you.

Flower - Most of eastern Owel's food is grown here, or is fished up along the coast. There are a surprising number of tasty plants that can survive in heat like this!