◀ previous
next by date ▶ next in Maladies ▶ 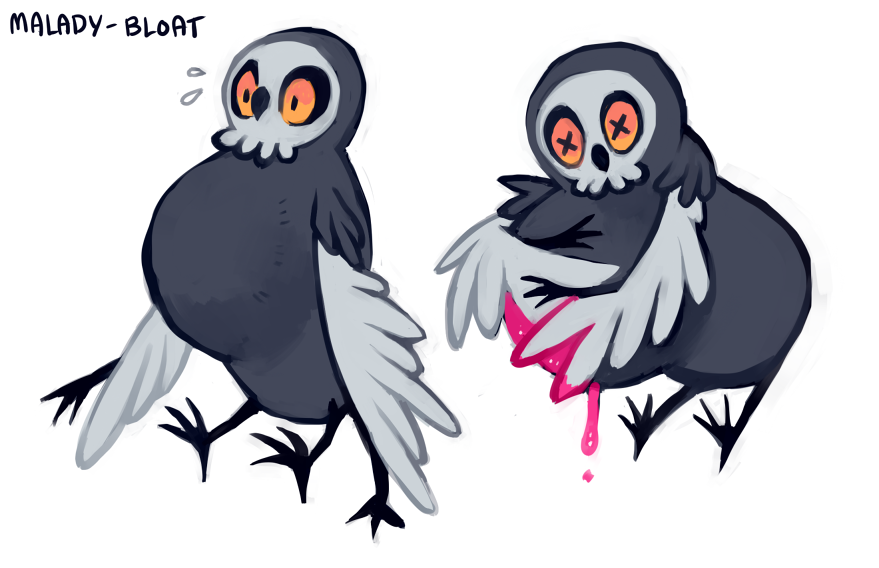 ◀ previous
next by date ▶ next in Maladies ▶

Early Symptoms of Bloat include

Late Symptoms of Bloat include

The very beginning symptoms of Bloat are not seemingly detrimental, so great care should be taken to memorize what they are. Bloat only occurs in Deep Mountain, so any individual exhibiting abnormal vitality should be monitored for the later symptoms of Bloat. If minor twitching of the eyes, lips and fingers occur after the bout of abnormal vitality, the individual should be assumed to have contracted Bloat.

Bloat is found only in Deep Mountain, and is the result of extremely high oxygen levels in the air infused with environmental Air magic. This high-magic, high-oxygen air is referred to as "eO". eO is responsible for the large (and sometimes massive) wildlife found in Deep Mountain, but outsiders not acclimated to eO can suffer significant damage from inhaling eO for prolonged periods of time.

Bloat affects smaller individuals more quickly than it does larger individuals; this is thought that a larger body requires more eO than a smaller body does to be physically influenced by it.

At the surface of Deep Mountain, eO levels are negligible, and protective equipment is not needed. The lower into Deep Mountain one travels, the level of eO grows, and the threat of contracting Bloat grows with it.

Individuals without the need to breathe or without a traditional respiratory system are thought not to be at risk of contracting Bloat. These individuals do not need any sort of protective equipment to guard against it.

Individuals with a traditional respiratory system (most mammals) are highly likely to contract Bloat when venturing into the lower levels of Deep Mountain without proper protection.

Acclimation to eO is possible, but takes a very long time, and is highly dependent on the individual and their affinity for environmental Air magic. There is one documented case of a witch who took a year to become fully acclimated to the highest concentrations of eO, and was able to travel to the lowest levels of Deep Mountain without suffering from Bloat.

For those without an extreme talent for Air magic or simply don't want to take a year or longer to explore Deep Mountain, breathing masks connected to an oxygen tank are available. For longer explorations, masks equipped with magical filtration systems designed to remove eO from the air can be purchased.

Care should be taken not to damage any kind of breathing apparatus, as venturing into Deep Mountain and having your oxygen tank burst or filtration system fail can result in an almost instant case of Bloat.

Remove the individual from Deep Mountain immediately, or apply an oxygen mask or mask outfitted with a filtration device to the individual. eO is the cause of Bloat, and removing it from the individual will halt the process of Bloat. If the individual is no longer exposed to eO, the symptoms of Bloat will gradually reverse themselves.

If caught and treated immediately, the individual will be fine. Side effects are vertigo and headaches lasting a day or two, but once these dissipate the individual is considered fully recovered.

If treated in the middle or late stages, when organ enlargement has begun, the individual should be evacuated to a hospital or other medical site immediately. The organs will shrink to their normal size, but during their enlargement they may have become damaged. They may have bruised other organs during their growth, or they may have been punctured or damaged by the bones that were once protecting them.

If the lungs have become so large as to burst through the individual's chest, crushing the individual's heart in the process, death is usually predicted. No special measures need to be taken with the corpse; Bloat is not contagious.