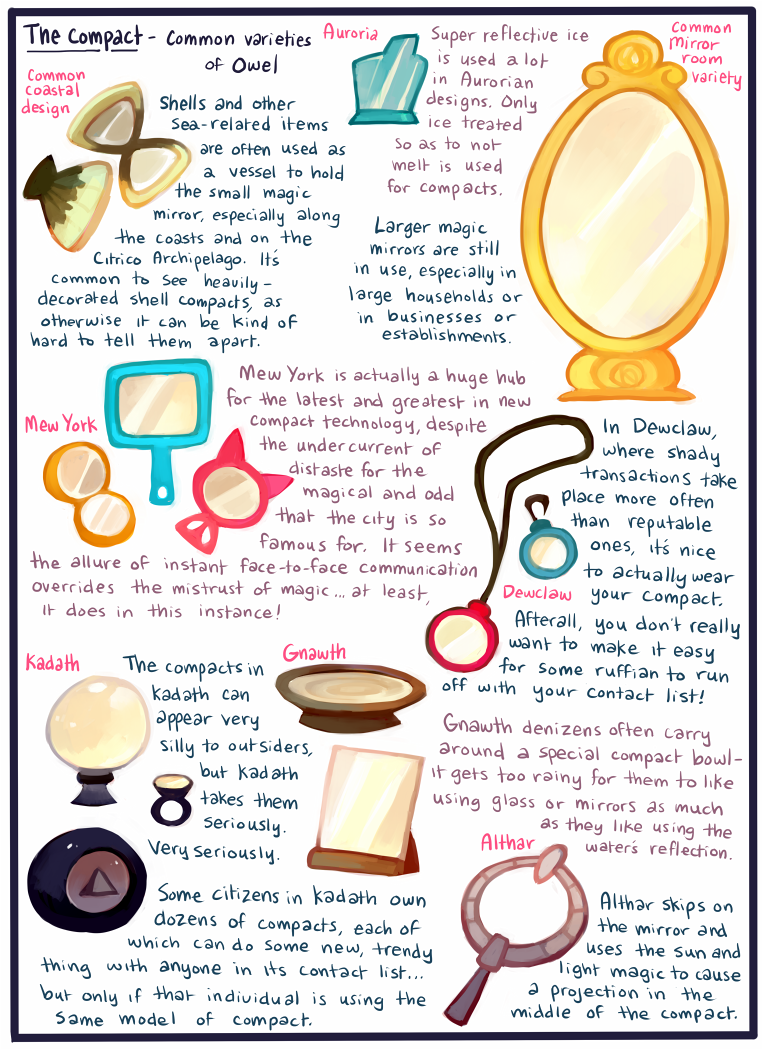 Compact magic mirrors, commonly referred to as "compacts", are an exciting recent development. The basic idea is the same as the traditional magic mirror: you can see and hear through another magic mirror as though it were merely a window. But full-size magic mirrors are expensive and cumbersome. With a compact mirror, you can hold a conversation with anyone† anywhere†† on the continent! Technology is amazing.

Communicating with another compact is called "dialing", a reference to the original compacts, which had literal dials for this purpose. Different models have different ways of dialing: some understand spoken names; some have a list you can pick from by touching the glass; some particularly cheap models can only link with one other compact at a time. Newer models even allow you to decline a dial from someone when you don't wish to talk, eliminating the need for a soundproofed carrying case.

With the rise in popularity and obvious utility, the market has become flooded with dozens upon dozens of different kinds of compacts. Each model promises its own selection of extra features, or "tabs" — short for "tablets", after the rune-inscribed tablets that power them. Any model can still dial any other, but tabs tend only to work between two of the same model. Between the constant deluge of these new models, the difficulty of adding new tabs to an existing compact, and the still highish price tag, it's no surprise compacts are still generally viewed as a luxury item.

Some tabs of note in recent years:

That last tab is actually the precursor to the "movie theaters" that are growing in popularity. Yes, "movies" work on the same principle, just with a larger mirror!

† Who also owns a compact.