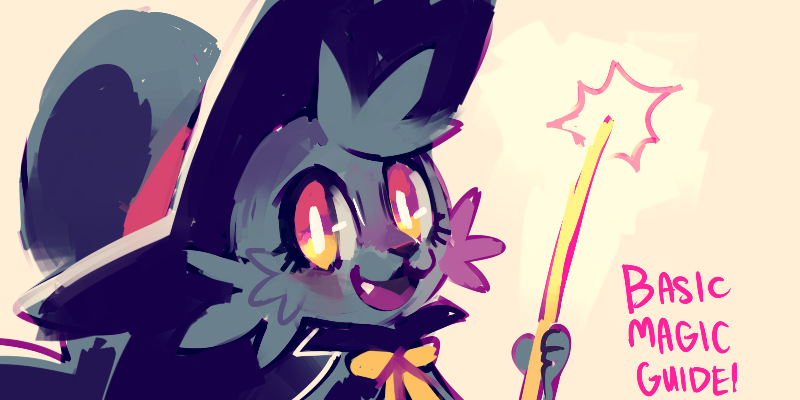 A Prudent Guide to Basic Magic in Flora

It's hard to narrow down "magic" into a manageable topic without breaking it into pieces. Magic is just such a ridiculously broad and vague concept, so to do something useful with it, easily-digestible chunks are required. Without the building blocks at least somewhat defined, it's hard to expect anyone to envision what they're going create.

There are five main categories of magic that you can expect to commonly see and hear about. They also correspond to a basic element and to a major sense.

By no means does this imply that someone who isn't of the corresponding elemental affinity would not be able to perform basic magic of that category. It does mean, however, that someone with, say, a Water or Water-based affinity would be slightly more naturally inclined to understand potion magic than someone without a Water or Water-based affinity. It's kind of like having a bonus. It doesn't prohibit anyone with another affinity from learning magic that doesn't correspond to their own affinity.

A loose definition of magical incense is: any magic that becomes modified as the magic is released from a source, either instantly or over time.

Neither fire nor smell are required for the incense to work or be called an incense, though oftentimes both fire and smell are involved. Any released magic, whether naturally occurring or intentional, and whether or not it has been modified by the act of being released, can be called incense.

Any concoction in any form (drink, salve, paste, etc.) which interacts with or uses magic in some way, intentionally or not, can be called a potion. Putting magical ingredients together via cookery is how most potions are produced.

Potions are thought to be one of the "easier" forms of magic to learn, as many recipes do not require the cook be magical, only that the instructions be followed. As potions are not an exact science, recipes and techniques may sometimes be modified as the cook desires. Ingredients can also be anything: herbs, other people, artifacts, you name it. Anything.

Some recipes do require outside magic, which is where non-magical individuals might run into problems. Some potions also degrade over time, leading to reduced potency or unintended side effects.

Artifacts can utilize and interact with all other forms and types of magic. They usually draw upon the wielder's innate magic or understanding of the artifact in order to work. Non-magical or uneducated individuals may have difficulty using artifacts. They can either contain their own magic or require outside magic to function. Artifacts can lose their magic over time and after use; artifacts that are permanent require a great deal more skill and power to create, as do any artifacts that have highly desirable and beneficial effects.

Artifacts are generally thought to contain a part of its creator(s), which helps define the purpose(s) of the artifacts. It is draining on the soul to create many powerful artifacts within a short amount of time, and can break an individual. Almost without exception, artifacts require large amounts of magic, willpower, knowledge, and intent in order to be created. This easily makes artifact-crafting the most difficult category of magic, especially if the creator wants there to be a minimal amount of ill-effects from using the artifact.

Any immaterial or material object which interacts with magic, intentionally or not, can be called an artifact. An artifact may activate or deactivate or operate on any number of conditions.

Anything audible falls under the category of incantations. They don't have to be real words - humming, chanting, singing, random noise… if imbued with magic or magical intent, it can be an incantation. They do not need to be heard by anyone or anything, either, to work.

Incantations do not require an intelligent individual. Any sound, whether naturally occurring or intentional, and whether originating from an individual, a tool, instrument, or natural or unnatural source can count, if imbued with magical intent.

Generally understood as manipulating magic through sound waves. As such, any sound that interacts with magic, intentionally or not, can be called an incantation.

Runes are generally thought to manipulate magic via shape and appearance. They can store magic like a battery, or contain instructions for altering magic that is passed through the runes, or both. Runes do not need to be in a pattern such as an alchemy circle; any visual marking (such as written languages) can also serve as a rune. Runes do not even necessarily need to be written in an actual language; any marking counts as long as intent and knowledge are applied to the rune during its creation.

Some runes must be created in a specific order or manner to work, whereas others can simply be copied through any available process. Any marking which interacts with magic in some way, intentionally or not, can be called a rune. Runes may also be activated or deactivated in any number of ways, depending on the rune. They're especially good at sealing things or setting traps.

Some individuals may be innately magical! They can either be born or created with a store of magic, or they can absorb magic over time through outside influences. The amount and type of innate magic is completely dependent on the individual.

It is possible to acquire affinities, or magical abilities, or work with magical elements that are not innate to an individual, and all it (usually) requires is practice

Some individuals or animals may just "know" how to do something magical, or have some kind of passive or reactive magical ability. This occurs most commonly in individuals and animals that are innately magical to begin with.