◀ previous
next by date ▶ next in Oneshots ▶ 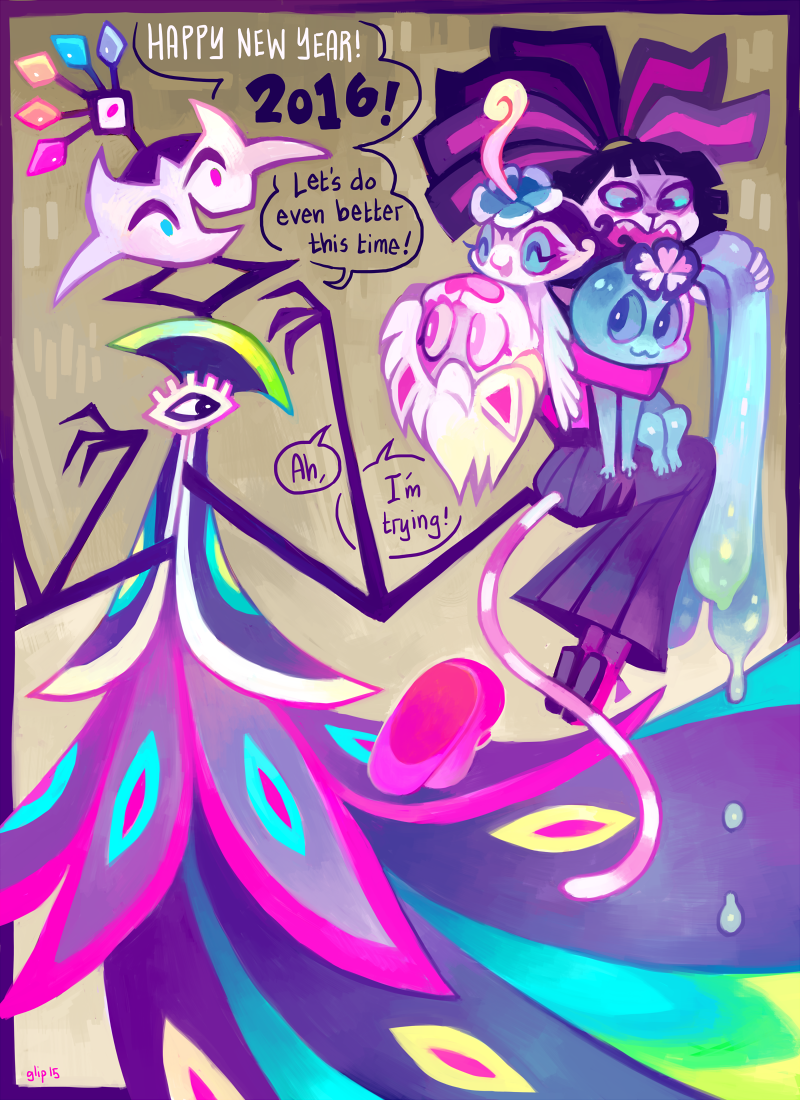 ◀ previous
next by date ▶ next in Oneshots ▶

2015 has been a really exciting and wild year. I mean... I guess, first and foremost, I finished my first large book, and got it printed. And now Seeds is in our shop. And I'm also gonna be at VanCAF in 2016. And Anime Expo, as an exhibitor! With shirts, even!

Man, though... this year was the start of really doing VNs and videos. The little video I made for the Kickstarter was where I realized I'd be doing more with videos later. I was so nervous, but excited. From the start I'd wanted to make better music so I could put it in my projects... and that's been so challenging, but rewarding. I'm so happy to be able to catalogue my musical progress from the past 8 months. I know I'm still rather new at it, but I have confidence in my ability to learn and keep growing as a musician.

But... that's all about 2015. What's 2016 gonna bring? Well, like I said, I'll be at a couple of conventions. But... I'll be revisiting Itchy Itchy and Broken Toy, as I said earlier this month, as I'm still gearing up for the Kickstarter to get those remade and book-ready. I can't quite work on that fully until I finish the last bit of This Means WAR, and Try, Try Again, which is only about halfway done. I'll be finishing This Means WAR in the next week or so, and then after that, Try, Try Again will have my full attention.

I won't be able to do any sort of side story like usual while I'm doing the Monday update schedule with TTA. I can't focus on more than one intense comic at once while I'm doing the VN/video work, and I have the next chapter of my Forbidden Flora comic to start in February, too! So basically I won't have time for anything besides TTA and the NSFW comic, except little oneshots like I've been doing.

I've been working on a secret project, too, which I'll talk more about when we've got something cool... but anyway, aside from that, I'm also planning for a plushie Kickstarter in August or so. I'll be having some awesome help from plush experts to bring some really cool dolls into reality. The first dolls are going to be Beleth, Orobas, and probably Amdusias. I'll absolutely get back to everyone with more information as I have it, but man, 2016 is looking to be a really terrific year with a lot of cool projects lined up.

I know everyone probably wants to know what, exactly, we'll be doing with Itchy Itchy and Broken Toy, but I'd rather save the details for the Kickstarter. Just know that the stories are getting extremely overhauled, and when ti comes time to support it, you can help bring extra stories to the book -- both ones we didn't release at the time, and new ones that enhance the story. It's going to be terrific.

Well, that's enough from me for now. I'm gonna keep doing my best. Thank you so much for the support, everyone, and I hope you like the things we have in store!