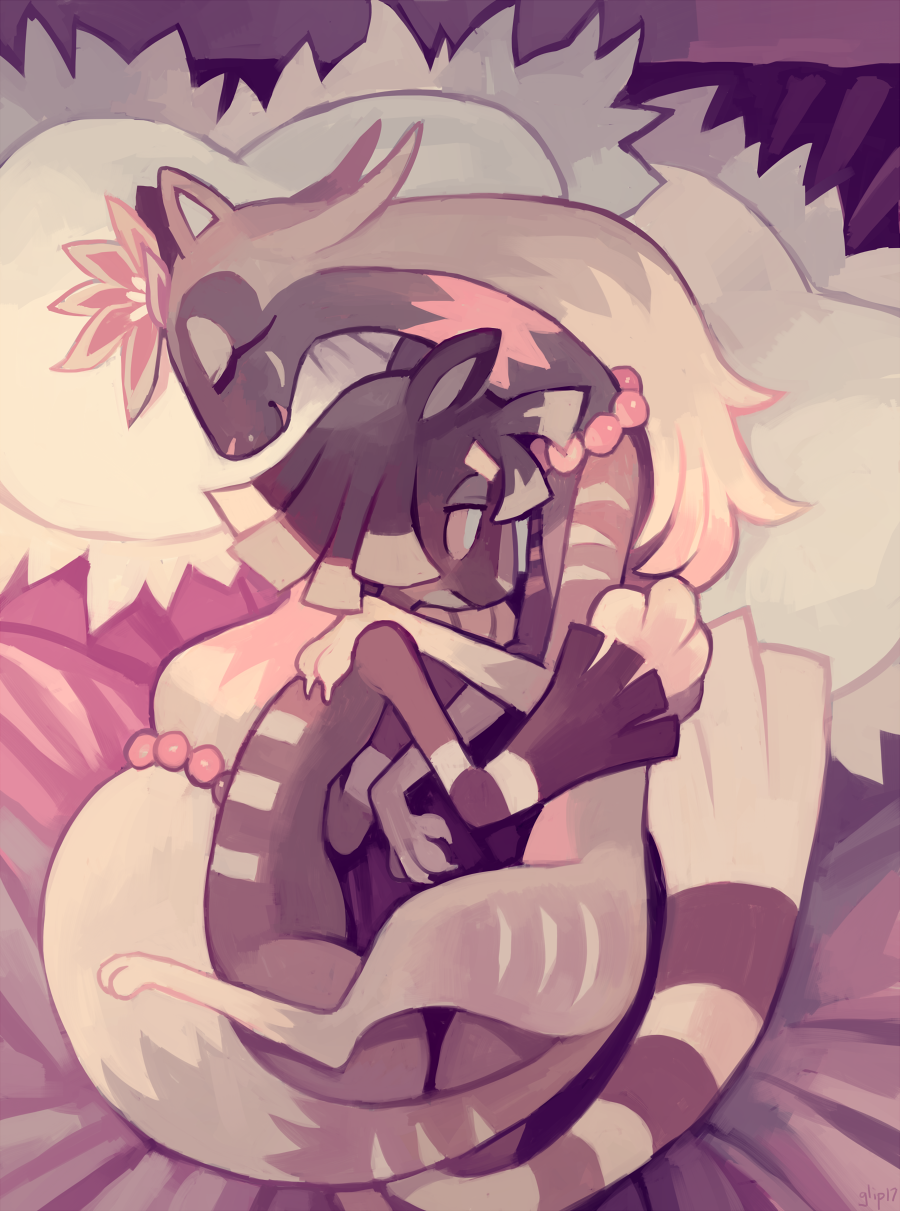 For the second time that day, Charthur awoke. She found herself on her side, her face pressed into Jasmaby's chest. Each gentle rise and fall came with a breath that tickled the hair on the back of her head. Charthur realized that Jasmaby had ended up curled around her, defining a pocket that she fit into exactly. A place, just for her.

The first rays of the afternoon sun were starting to steal through the window. A gentle breeze occasionally played across the parts of her body not covered by the silky blanket wrapped around the two of them.

This was it. This was what she wanted. Exactly this.

She thought for a second. The memories were still fresh.

Not that, she had to admit, the events immediately preceding this weren't, well, glorious. And a few dozen other adjectives besides.

But no, this, right here and now, was even more important. This was perfect.

She sighed, and pressed her face further into Jasmaby's chest, trying to hear his gentle heartbeat.

Please, she thought desperately. I don't know what comes next. I have no idea. So please, just let this moment last a little longer. Sleep just a few minutes more. Let me enj-

Are you kidding me, thought Charthur. "Y-yes?" she managed, looking up. Jasmaby’s eyes were still closed, but he was starting to stir.

Charthur buried her face in his chest again, hiding the idiotic smile spreading itself across her face. The words made her happy. Too happy! They didn’t feel real; she replayed them a dozen in her head, just to check. Pulling away just a little bit, she responded, “I’m taken by your peerless grace / as well as, yes, your pretty face. / Your ego I don’t wish to coddle / but you could be a fashion model.”

Charthur felt Jasmaby chuckle. Charthur was glad. The words had come, comfortably, easily. They felt right. She had never said words quite like them before. Regular words were hard enough, so she had assumed words like this would be impossible for her. But now she found herself in a situation like this, and…

…a situation like what, exactly? She wasn’t sure. There was nothing for it but to ask: “Uh, not to be a tasteless bore,” she pressed her forehead into Jasmaby’s chest, fighting the urge to muffle the next line. “…but would you want… an encore?” It wasn’t exactly what she had meant to say, but for once, she didn’t mind the miscommunication.

“Hmm. I suppose that depends,” Jasmaby mused. Prior to the day’s events, it would have sounded egotistical; now, Charthur felt her heart rise slightly at the implied challenge. “Are you planning on taking me somewhere nice for our dates?” Charthur’s smile, grew slightly, impossibly though it seemed, as she nodded her assent. “And you’ll attend my shows?” Jasmaby’s eyes were still closed, but could feel the vigorousness of the nodding as the top of Charthur’s head brushed along his neck.

“And write me poetry?”

This one gave Charthur pause. Yet… the anxiety she had expected to rise up wasn’t there. There was a certain unease, but for once, it felt like something to conquer, rather than retreat from. There were possibilities there, once more. “Yes… yes, I think I will.” She had been planning to leave it at that, but the next line was too easy for her to ignore: “Words to make your heart stand still.”

Jasmaby sighed, a soft, contented sigh. “That… is exactly what I wanted to hear. That might be even more important than this.” He paused, purring deeply, “Not that this wasn’t… mmm, wonderful. Yes, I do believe an encore is in order.” Charthur could feel her face go flush, and pressed it fully into Jasmaby’s chest once more. He went on: “Perhaps for the next time, we might skip to just after I dragged you into my bedroom, though?”

Charthur had several things to say to this, but decided most of them could wait for a later conversation. Instead, she contented herself with just squeezing Jasmaby, and thinking about the future.

Her thoughts were interrupted by a laugh, felt rather than heard, as Jasmaby was managing to keep trapped in his shaking chest. Charthur looked up at him, grinning. “Is this a wiggle? Do I feel a giggle?”

“Oh,” said Jasmaby. “I was just…” he brought a paw to his face to cover it. “I was just remembering how it seemed so clear that you disliked me, but how you kept showing me that it couldn’t be true. Oh, goodness, Charthur…” he moved his paw to her ear, stroking it gently. “How cute you are, how unbelievably cute!”

Charthur let out an exhale. Her ear twitched, Jasmaby’s gentle attention making it perk up. “My curiosity, you must s-slake,” she sighed (oh, that was a sensitive spot, wasn’t it?) “What action was this, did I take?”

“You know, dearest,” said Jasmaby. “No matter how of ridiculous it was, you always made sure to join the other team so we could fight! The thought of a tiger going against her own opinion like that, just to fight me?” He shivered with joy. “It gave me hope, day after day.”

She could just drop it. That was the smart thing to do. Still heady from the day’s events, she plowed forward anyway: “I’m… afraid that isn’t so. / I liked you but: sorry, no?”

Jasmaby’s paw stopped its stroking. For the first time since he woke up, his eyes opened. Wide at first, then narrowing. “What,” he said. “Really?”

Charthur nodded. “I did enjoy our every bout!” she reassured him. “And hey, at least it all worked out?”

Jasmaby was silent. Consternation darkened his expression. “You mean,” he started, and stopped. He chewed on the idea for a bit, finding it hard to believe. “You mean even for that last one? You don’t… you actually don’t like…”

Charthur responded, “I would swear it on my sickles: / When you serve me, hold the pickles.”

Jasmaby’s voice took on a harsh tone. “Except when it comes to putting them on sandwiches, right?”

Charthur caught herself. "Yes! They're great on a sandwich.” She rolled her eyes, slightly annoyed Jasmaby was making such a big deal of the matter. “I can't believe you're such a… rich. / Person."

Wow. Nice save, idiot! Not daring to move or breathe, she waited for Jasmaby’s reaction. There was a pause, then an exasperated grunt. That seemed to be the end of it.

Charthur relaxed, until Jasmaby pinched the tip of her ear and gave it a vicious twist, forcing a yelp out of her. An ache radiated, growing in intensity. “I can already tell,” he snarled, “that this relationship is going to be a lot of work.”

Looking up at much as she could with her ear held in place, Charthur took a risk: “Your words, surely they are true, / but it’ll be worth it, to be with you.”

Another pause, before Jasmaby gently released his grip and softly patted the tweaked spot. When he spoke, there was a gentle embarrassment to his voice. “I’m not…” Charthur could see a smile working its way onto his face. “Well… if you say so. I want to be worth it.” He looked down at her, and as their eyes met, happiness flooded Charthur’s heart once more. “For you, I’ll certainly do my best.”

Charthur didn’t need to say anything in response to this. He had taken the words right out of her mouth.

Final part of the story, by opa-opa!

Except not actually, because there's an epilogue update that I totally forgot existed. So look forward to that on Monday!