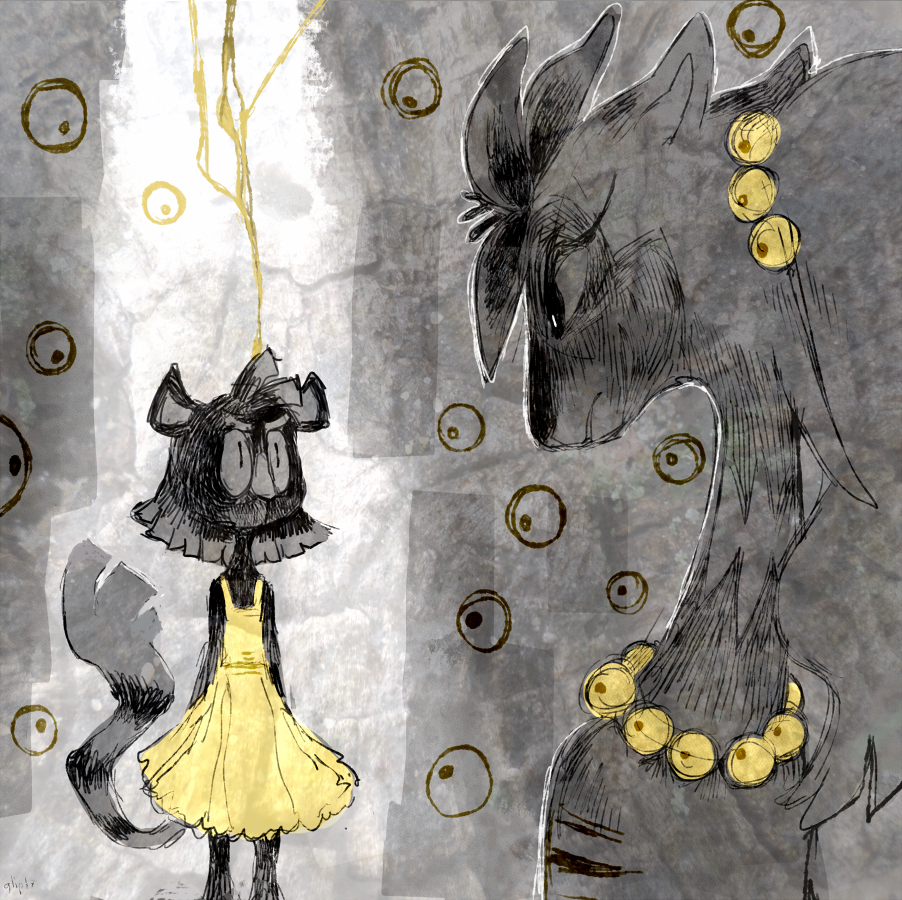 Where is he? Why is this taking so long? thought Charthur. She had captured this zone for a reason — it was the largest capture point in play, with almost nothing in the way of obstacles. This would be the perfect place for Jasmaby to try and force a showdown between them, with no cover for Charthur to shield herself from his fireballs. So where is he? she thought again, getting antsy.

Easy points, Charthur tried to convince herself. Just chill out here, rack up some points and oh hey, it’s Nim, I can go hunt him down now!

Nim stumbled over to her, panting heavily and checking over his shoulder every few steps. Not waiting for him to catch his breath, Charthur insisted: “It seems you might already know, / can you tell me, where’s my foe?”

Nim planted a hand on her shoulder and tried to steady himself. With his other, he waved at her. No, he was saying. Stay here. She tried again. “Come now, do not feed me prattle; tell me quick, how fares the battle?” Nim looked up at her, openly annoyed. “Well,” he spit out, “There’s a 20-foot-long slug eating everyone in the town center, Jasmaby’s just captured the riverwalk, and I have a hot date with your dad tonight.”

Charthur nodded at him. “Great, and so off I’ll race; you stay here and guard this place.” She started to run off, but Nim grabbed desperately at her sleeve.

“Guard this place how?!” he shouted. “By myself? Can you name even one tiger that won’t just whip my butt the moment they show up?”

Charthur scoffed, then gave Nim her most confident, inspiring smile. “Please, of course I can name one —” There was a beat. Charthur could feel her brow furrow slightly. She broke Nim’s gaze to look up for a second, then down. A drop of sweat emerged on her forehead and traitorously made its way down her face. After a few more seconds, she went with: “…I gotta go. You have fun!”

As she sprinted off, Nim finally managed to catch his breath, just in time to shout, “YOU! ARE! THE! WORST!!” He huffed, and turned at exactly the right moment to catch Fizzy’s lobbed Bitty Boom right between the eyes.

It wasn’t fair, Charthur thought, the heat of the fire scorching her cheek, the roar flooding her ears. She twisted, just out of harm’s way, but slowing her approach.

It’s not supposed to be like this. She struggled to regain her balance. Another fireball was coming. She managed a little sidehop that took her out of its path, but managed to land poorly, her right ankle out of alignment. She cringed, pain radiating up her leg. Jasmaby had faded back a few steps: between that and this injury, her plan had fallen apart. Again.

It’s not supposed to feel like this. It’s not like Charthur had never lost a war before. Even when she won, she had still gotten herself knocked out plenty of times, as she was perfectly happy to throw herself at overwhelming odds to give her teammates time to clinch the victory. Losing wasn’t the problem, before this.

Another tiger luring her into a trap, countering her ice, taking her by surprise: these were the quickest ways for them to earn her respect. Most of her closest friends were those who had beaten in her a fight; knowing other tigers who were willing to dedicate themselves to war the way she did was what made her happy. …before this.

She rushed forward, ducking under yet another projectile. It had forced her head down, meaning she was rushing in blind. She tried to ignore the pain in her ankle and the weight in her gut. I just want, she thought, and found herself unable to finish the sentence. What?

To not get hit by that roundhouse, a voice offered. It had a point. She threw her last sickle on the ground, creating an icy patch below her feet. A quick push just before the ice spread was enough to propel her sideways, out of range of the vicious kick. She shaped the ice ahead of her, curving her path back towards her target; she pushed off her good foot, gaining speed.

I have this. He punches, I pull him onto the ice with me. _Here it came. He kicks, I let him push me back, reform my sickles, work from there. The moment approached. _He goes for a throw, I go for his throat. He tries to torch me, I take out his legs. This was it.

Attack me! thought Charthur. I’m ready for you! ATTACK ME!

Jasmaby didn’t. Instead, he stomped the edge of the ice patch. The earth shifted, and suddenly there was nothing but jagged shards under Charthur. She stumbled, unable to find purchase. Jasmaby lunged in. Charthur had a few moments to admire the way the ice melted around his feet. Jasmaby had taken Charthur in her element and turned it against her, again. How poetic.

In contrast, the fireball that slammed into her back right before the haymaker caught her across the jaw were simply brutish. Charthur tried to shoot him a disapproving look before she went out.

Charthur pushed open the front door, rubbing her knuckles tenderly. She had considered trying the fashion district again, but the thought had made her punch a wall hard enough to leave a bruise. Not today. It would be a mistake.

The house was quiet and dark. Nim wasn’t home? That was unusual. There was his lucky flight jacket, the one he wore for the war. Had he been home and left again? It wasn’t like him. The rush of emotions that came when a war finished tended to give him the jitters, he had explained to her, so he typically spent a few hours at home relaxing before doing anything else. So where…

A thought occurred to Charthur. No, that’s… She considered it. It wasn’t actually possible, but… She nervously tapped her fingers together as a certain mental image reluctantly formed in her head.

Just to be on the safe side, she made a mental note to give her dad a call tonight.

Charthur entered her room. The mess was getting worse. The one in your room, or the one in your head? said the nasty little voice. Ha ha, funny, she thought back at herself wearily. The papers had spread out onto the floor, some carelessly knocked off some other surface, others wadded up and angrily spiked there in a moment of frustration. Charthur sighed, and stooped down to clean up a little.

She saw it. Under her bed. Still sitting there, the wrapped package. She had forgotten about it. (Did I, really?) It leered out from the darkness at her. Now would be a good time to go and return it.

Nim wasn’t home. If she was ever going to use it…

Hands trembling, she reached under the bed and brought the package out. She could feel the shame growing in the tips of her ears as she slowly, delicately unwrapped it. Had any piece of twine or tape proven even slightly difficult, she might’ve had an opening to scrap the plan and simply return it instead, but she had no such luck. The package was unwrapped. Opened.

It was worse than had remembered. Even more horrible. Incomprehensibly shameful.

An adorable little sundress. How had it come to this?

She ran one hand over the dress, feeling the material between her fingers. It was so soft to the touch, so light and airy. Disgusting. Stomach churning, Charthur shucked off her top and worked down her pants, kicking them off. This isn’t worth it, she thought, but picked up the dress anyway. Don’t. She pulled it on over her head. Stop. No. She turned to the mirror.

It was… a good fit on her, actually? The dress sat on her hips nicely. It followed her curves without clinging to them. It managed to draw attention to her feminine features without being showy. The way the straps hung on her shoulders, the shallow curve of the neckline, the playful way it flared when she twisted her hips… there was no denying it, actually. The dress was cute, and she looked cute in it. …really cute, in fact.

She despised it. The dress, her reflection, herself. A nearby chair begged her to be put through the mirror, and it took some willpower to ignore it. Instead, she turned to the magazine covers still hanging above her desk.

I’m doing this for you, she thought. You’ve ruined my way for me, so I’m trying yours. Just… give me a chance.

She looked back at the mirror. The sight made her nauseous.

Well. That was fine. Nausea had become something of a constant background feeling for her anyway.

Not sure who she was anymore, she turned and headed for the fashion district.

The sun was unusually hot today. No, that was bullshit. This was the heat of humiliation. Some part of her recognized that no one was looking at her, but it sure felt like every single pair of eyes was burning a hole right into her heart. Wearing someone else’s style like this… it would’ve been less shameful to streak through the market. Probably harder to make conversation while sprinting past, but ultimately less shameful.

Conversation, right. How was this thing going to go? He’s got to like it, at least, she thought. This was his style. He’d owe her a compliment, at the very least. And he’s so powerful… he must understand what it means to be a turf tiger. He’d have to understand what this gesture meant. To wear someone else’s style… he’ll understand my feelings, she thought. And at least that’ll make one of us.

There he was. Again, the icy fear, the moment of hesitation. Last chance to streak, said that nasty little voice. She let the anger push her forward instead. There weren’t a lot of tigers in his entourage today, thank the gods, so news of her shame wouldn’t travel quite as fast.

Do we have to do this again? she thought. She was briefly struck by the absurdity of wanting to be with someone who she hadn’t yet managed to exchange greetings without something going hideously wrong. Relax, RELAX, she ordered herself. Let him say it. Go from there.

They made eye contact. There was a look on Jasmaby’s face — but not, as she had hoped, interest, or appreciation, or even pity. Even pity would’ve been something at this point. All she found instead was confusion. He didn’t understand, did he? She tried to keep the surge of self-hatred from showing on her face. What a comforting lie that had been.

He opened his mouth to greet her: “What are you wearing?”

For a millisecond, the need to declare war was overwhelming. The hate, burning in her gut, drove it forward. If there hadn’t been a war earlier that same day, she wasn’t sure how she could have restrained herself. It was exactly the wrong thing to declare war over, and as she realized this, she felt further away from being a turf tiger than she had ever felt in her life.

She stormed off. No, that was bullshit. She wished she had held onto the wherewithal to storm off. She had sprinted, nothing more important than simply putting distance between the two of them.

Home. No Nim. A small mercy.

She found herself staring at them. She realized something. Why she left them up, why they upset her so, why she had gone so far as put on this ridiculous dress in the first place. The nasty voice made it clear, all at once.

No matter what you do, how hard you try, how badly you want it: He will never look at you that way.

The dress ended up in a wastebin, already overflowing.