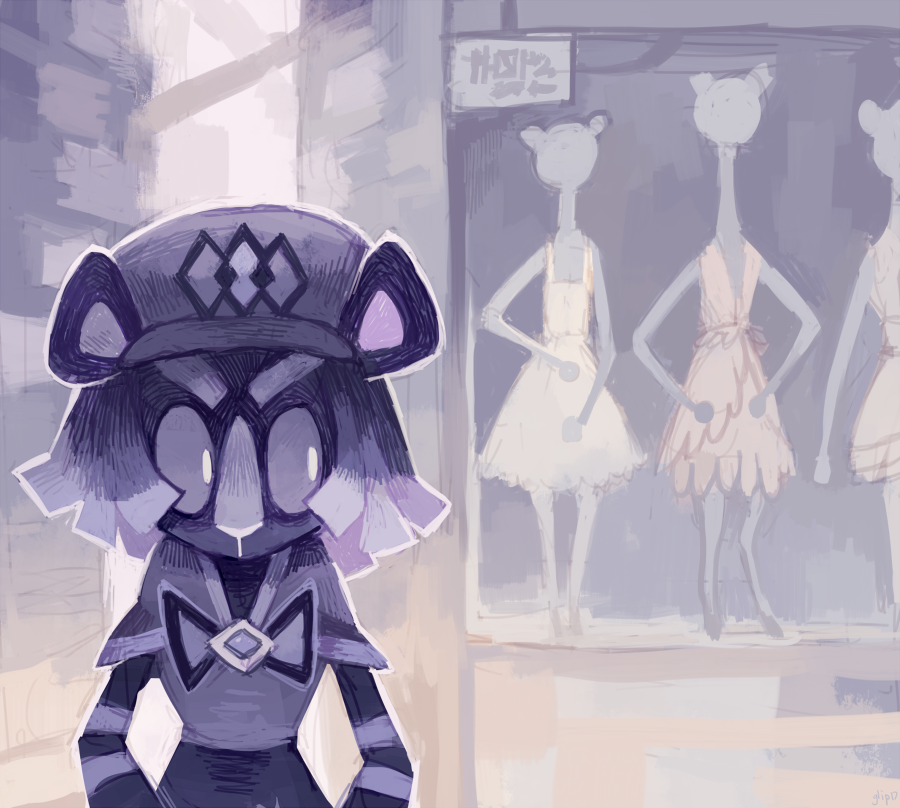 Some time later, Charthur found herself in the fashion district again. It was the section of the Dewclaw market she was least familiar with: she had her style, and found nothing to be interested in among the stalls and shops here. Which was a problem — she didn’t have a good excuse for wandering through.

She brought the back of her paw to her cheek again. The image of Jasmaby plucking her sickle out of the air played through her head again and again. It should’ve been impossible. Was there something more to him? Had she slipped up, somehow? Her inability to understand what had happened sat on top of a growing confusion that had taken root in her head.

Her plan to avoid Jasmaby until the poem was ready had been working, up until now. After a move like that, though… she had to say something. Not acknowledging it would be rude, the kind of rude even she couldn’t get away with. So… right. She wasn’t here because she wanted to be. This was a visit under duress.

There, across the market, she spotted Jasmaby, surrounded by a larger entourage than the last time. Assistants? Agents? Fans? It was unclear. The urge to retreat was immense, but right before it could take control, Jasmaby turned and spotted her. Swallowing down a rising panic, Charthur marched over, stopping right where it was comfortable to pounce. Talk. That second one.

This time, she thought, I’ll let him say hello first. That’s been my mistake — I keep rushing in and leaving myself vulnerable. Why should I do all the work? It’s about time I go ahead and let him make the first move. “Hello.” How egotistical do you have to be, to expect the other person to always put themselves out there? Why do I always have to take the risk? No. No more of that. Let Jasmaby make the first move, and I’ll play off of whatever he…

Charthur realized that she was at the center of a very awkward silence. Jasmaby’s entourage had all stopped talking, instead staring back and forth between the two of them. A lump formed in her throat. Hang on, she thought. Her memories rewound a bit. “Hello,” Jasmaby had said. Charthur could feel her jaw drop. She fought to find her voice, to say anything, but only felt her vocal cords closing up.

“Hh—” she managed. Jasmaby gave her a withering look.

She swallowed. That was a practice run. Didn’t count. This time she was going to say it:

But before she could, Jasmaby cut in. “What,” he said coldly. “Do you have something to say to me? Were you going to ask me out on a date?”

Charthur’s hands suddenly went tense, her awareness brought to the tips of her nails. A desire to go for Jasmaby’s neck flared… but instead, she jammed her cap down low over her eyes and stormed off.

Charthur tried to focus on breathing. In, out. In, out. In, out. The cool and relative privacy of the alleyway were helping, but the scene kept replaying, over and over again. You’re a joke, said that nasty internal voice. Is it any wonder he treats you like one?

She ripped the cap off her head and wrung it anxiously. She hated this. This utter helplessness, invading every aspect of her life. Being helpless in front of anyone was something she could barely stand, but being helpless in her own head was…

She rubbed an eye with the heel of her hand. Get a grip, she thought. This was… a new situation. That was all. She’d figure it out. She always did.

One more deep breath. Good enough. She could try to make it home again. She emerged from the alley and was about to head off when it caught her eye.

It was… horrible. Painful even to look at. A betrayal, in physical form. A surrender. She felt ashamed even looking at it. She couldn’t possibly be contemplating…

She realized, with a sinking feeling, that she was.

Avoiding eye contact with the shopkeeper, she dug around in her pockets for her wallet.

She arrived home, instinctively trying to keep the wrapped package low and slightly behind her back, to avoid drawing attention to it. Nim was reading when she arrived, but he immediately hopped up and met her at the door as she entered. Cramming a piece of cornbread in her hand, he started in: “Well, THAT was a blow-out. Perhaps we would’ve managed to score at least ONE capture if our MVP hadn’t decided that showing off for a boy was more important than, oh, I don’t know, not throwing the entire war?”

Charthur sighed and stared down at her cornbread. Nim was a good roommate, and a better friend. Trying to cheer her up like this was sweet, to say the least, but now just wasn’t the time. She forced the cornbread back at him and stated: “I’m not in the mood to fight / Leave me be: I need to write.” With that, she brushed by him and closed herself in her room.

From the other side, she could hear: “Not in the mood to… hey! Who the hell are you, and what have you done with my roommate?”

Charthur ignored him. She regarded her room instead. The papers were starting to get out of control. They had taken over her desk, made in-roads on her table, started to creep onto her nightstand and bunched up on her windowsill. She felt a wave of embarrassment: each one represented a failure, an expenditure of time that went nowhere and accomplished nothing.

Her eyes fell on the magazine covers. There he was again: kind, sweet, not-an-unrepentant-jerk Jasmaby. She snarled reflexively at them. The package tucked under her arm suddenly felt heavy. What had she been thinking? How could she be so stupid? She dropped the package on the ground. She raised her foot, ready to crush it… but opted to punt it under her bed instead. She could return it another day.

She flopped onto her bed. If she never saw Jasmaby again, it would be too soon.