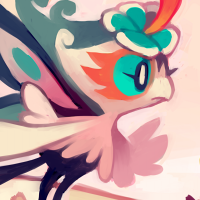 A rather large goal for such a small pygmy pyzky! It's a good thing Cress is by her side to help her out.

With her mind too focused on collecting seeds, Min failed in her duty to notify Cress of the Equinox Drop-Off's activation. They rushed to the flight station to find out all the flights had already left, and that if they still wanted to enter Hellside via the Drop-Off they would have to make their own way to it.

Upon realizing that the Drop-Off was a gigantic maelstrom, Min pretended that they were entirely too late to utilize that entrance and decided that she and Cress would be better off finding a different portal to Hellside.

Unfortunately for Min, the only other portal known to Cress was in Polaris, and the quickest way to Polaris was by Cress the Boat, a.k.a. "S.S. Friend-Drowner"

Min was thrown overboard along with her bag of seeds when Cress crashed into a rock after falling asleep while sailing. Normally, this would have been only a minor inconvenience, but as Min failed in her duty to seal the bag of seeds, it became flooded with salt water. Min stayed behind to guard the seeds while Cress ventured inland in search of fresh water to rinse the salt off the seeds.

While Cress was searching, Min was wallowing in self-pity and generally not doing anything very productive at all. When Cress came back with the fresh water, Min estimated they had about two weeks before the seeds would start sprouting and need to be planted. She then resolved to take their mission more seriously, and they continued their journey.

Min and Cress met an imp named Cayenne, who offered to tell them where the local portal to Hellside was in exchange for knowledge of where he could find lava ore.

Later on, Min failed in her duty of fulfilling Cayenne's deal, as she merely had Cress bring one lava ore to him rather than tell him where he could find it himself.

It was revealed that Min and Cress actually stole the lava ore from Lionel.

Min and Cress attempted to track Cayenne down to make him fulfill his part of the deal, but Min failed in her duty even there and mistook a different imp for him.

The imp wasn't too offended, and ended up taking them both to the Hellside portal.

Min ended up being separated from Cress upon entering Hellside.

Min was led to Furfur's house, and both of them came under siege from an angel. Commanders Orobas, Amdusias and Beleth arrived in time to repel the angel. In the midst of all the commotion, Furfur, tired of "babysitting" Min, took Min's bag of seeds and flew away.

Min was then reunited with Cress, both of them safe and sound.

Andre attempts to reassure Min everything will be fine, despite her fears and concerns.

Cress and Min remember who stole their seeds and enlist Beleth to help reclaim them from Furfur. Before they could form a plan however, Min gets frustrated and flies off to find her seeds and Furfur by herself.

Cress and Min remember who stole their seeds and enlist Beleth to help reclaim them from Furfur. After plans to save the seeds go awry, Min stops Cress from inflicting further harm on Furfur and Beleth.