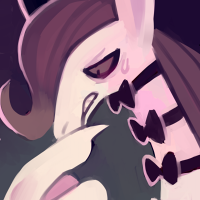 Amdusias is the leader of The Blinds, and as such, top servant of the Templar. She spends nearly every moment working for the protection of the Blackjack Isles. She gives out Bweehorses to anyone who asks for one.

Amdusias was infuriated by Beleth's slacking-off during the Itchy Itchy crisis and decided to pay them a visit. She invited herself into their house, and ended up scaring Beleth away. She then rifled through their belongings and, when Beleth came back, proceeded to verbally reprimand them.

While this was going on, a curse placed upon her earlier by Pride activated, and Bweehorses started to swarm her.

Days later, she put in a request to have Beleth transferred to her command in order to improve their skills and attitude, which was granted by Andre.

Before You Know It

With her newly appointed assistant, Amdusias head back to her home. Along the way, she shares a song with Orobas.

Amdusias led the assault on the atrocity with Orobas and Beleth, and they successfully drove the atrocity back to where it came from.

In the aftermath of Furfur's latest home remodeling, Amdusias and her crew have no choice but to stand back and watch forces beyond their control.

In the aftermath of Furfur's latest home remodeling, Amdusias waits for Naberius to show up to help Orobas. In the meantime, a rabbat arrives to sing her a song.