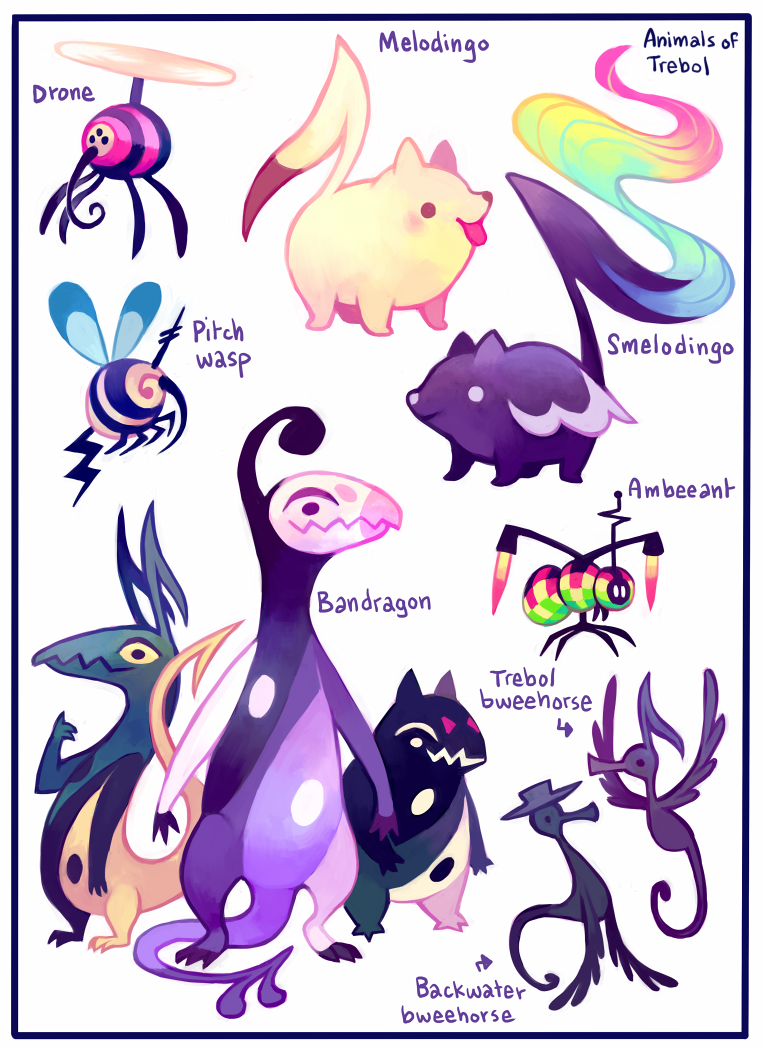 Drones: These things look like bees, but they’re drones! They come in several different colors. Larger drones emit lower-pitched buzzing, and smaller drones emit higher-pitched buzzing. They’re generally fairly tame, but take care not to disturb their hive. Drones don’t bite, and they don’t sting, but they don’t need to. When threatened, thousands of drones swarm the target and begin to vibrate intensely at extremely high frequencies. This often causes the perpetrator to lose all feeling in their extremities, and they soon soon fall into unconsciousness due to the vibrations shaking their brain. Individuals tend to wake up with severe nausea and a tingling, pins-and-needles feeling all over their body. This is enough to deter almost anyone from disturbing the drones a second time. The honey that drones produce is sought after by doctors and magic-users. When exposed to magic, drone honey takes on certain properties of that magic, effectively turning that magic into a convenient, edible form.

Pitch Wasps - These wasps love to hide in fruit trees and attack unsuspecting travelers who venture too close. Their favorite tree to hide in is the pïtch tree, due to the extreme popularity of the pïtch fruit. Chances are, if you find a pïtch tree, you’ve also found a handful of pitch wasps. Their venom is nonlethal, but is fast-acting and painful. Pitch wasps derive sustenance from the anguish of those they attack, through a psychic bond created by the pitch wasp’s venom. Squishing or swatting a pitch wasp is not recommended, as they burst into a poisonous, black sticky mass, hence the name ‘pitch’ wasp. It is advised to avoid them entirely. Topical painkillers should be administered as soon as possible, if necessary.

Melodingo - Docile, friendly, and possessing a sweet voice, Melodingos make good pets for anyone who just wants a pleasant companion. As a bonus, they can be trained to bark tunes. There are competitions where Melodingo owners have their pets sing complex songs. The size and color of the Melodingo determines what kind of voice and range it will have. They can even be trained to sing different tunes to communicate different things - a "let's go for a walk" song will be different than a "please feed me" song! It's not uncommon to take your Melodingo to a trainer in order to have it become effective at communicating basic needs and wants.

Smelodingo - A mutation of the Melodingo, the Smelodingo is similar in temperament and attitude. However, Smelodingos are mute. Instead of barking, they communicate through releasing a colorful scent trail from their tail which, when inhaled, causes a melody to be "smelled". Different scents correspond to different needs and wants and moods. You'll find it hard to ignore a Smelodingo's annoyance, as well; foul, long-lasting odors with a horrible dissonant song are a choice weapon against an owner who's getting on a Smelodingo's nerves. Their scent trails can actually be collected and stored for later use, magical or otherwise.

Bandragon - Sometimes, while hiking or exploring Trebol, you might hear a performance going on in the woods. "That's weird," you might think. Except it's not, not on Trebol - Bandragons form bands and leave bands all the time, and they go around practicing their routines anywhere they happen to be. If the band of Bandragons notice you, they'll rush over and try to impress you with their new song. They'll get agitated if you try to escape their performance. Sometimes this leads to attacking, but often it leads to the Bandragons breaking up and forming new bands with other stray Bandragons. These bands are always doomed to failure, in the end: Bandragons only ever know how to copy other songs they've heard. They don't have many original musical ideas and thus rely on hearing songs performed around Trebol. And, once one group of Bandragons starts playing a new song, it tends to spread quickly through all nearby groups as they each rush to play the song better. As a word of warning: don't practice your own unreleased songs while out in nature, or a group of Bandragons might make it popular first!

Trebol Bweehorse - Darker in color (and more imbued with Sound magic) than the Topside coastal variants, the Trebol Bweehorses are curious about anything musical. The easiest way to attract one (or many!) is to go out into the forest and play a song that hasn't been heard before. If the song is interesting enough, you might be in luck. Once a Bweehorse has decided to hang around you for a while, sometimes it'll start making sound effects for different things - even if the sounds are ultimately redundant. Trying to stop a Bweehorse from doing so will only confuse it, as it'll just think it's not doing a good enough job, and it'll double down on its efforts. If, instead, you appreciate the Bweehorse's efforts, it will no longer deem the sounds necessary and will usually move on to something new - whether this be a new individual to follow, or a new set of sound effects for the Bweehorse's chosen companion.

Ambeeant - Want a visual interpretation of the sounds or music in the air? An Ambeeant will do the trick. These guys aren't actually living, but they're instead little robots with simple intelligence and a battery that runs on feeding off of the ambience in the air. No one knows who made them all, but an awful lot of them fly around Trebol, collecting sounds from different sources. Ultimately, they're harmless - even the little "flames" that shoot out from their wings are really just Light magic made to look like fire. They'd make a nice pet for a beginner if not for the fact that they don't like being contained indoors! Lots of kids find this out the hard way when they suddenly have to explain to their parent why there's a broken window in the house.