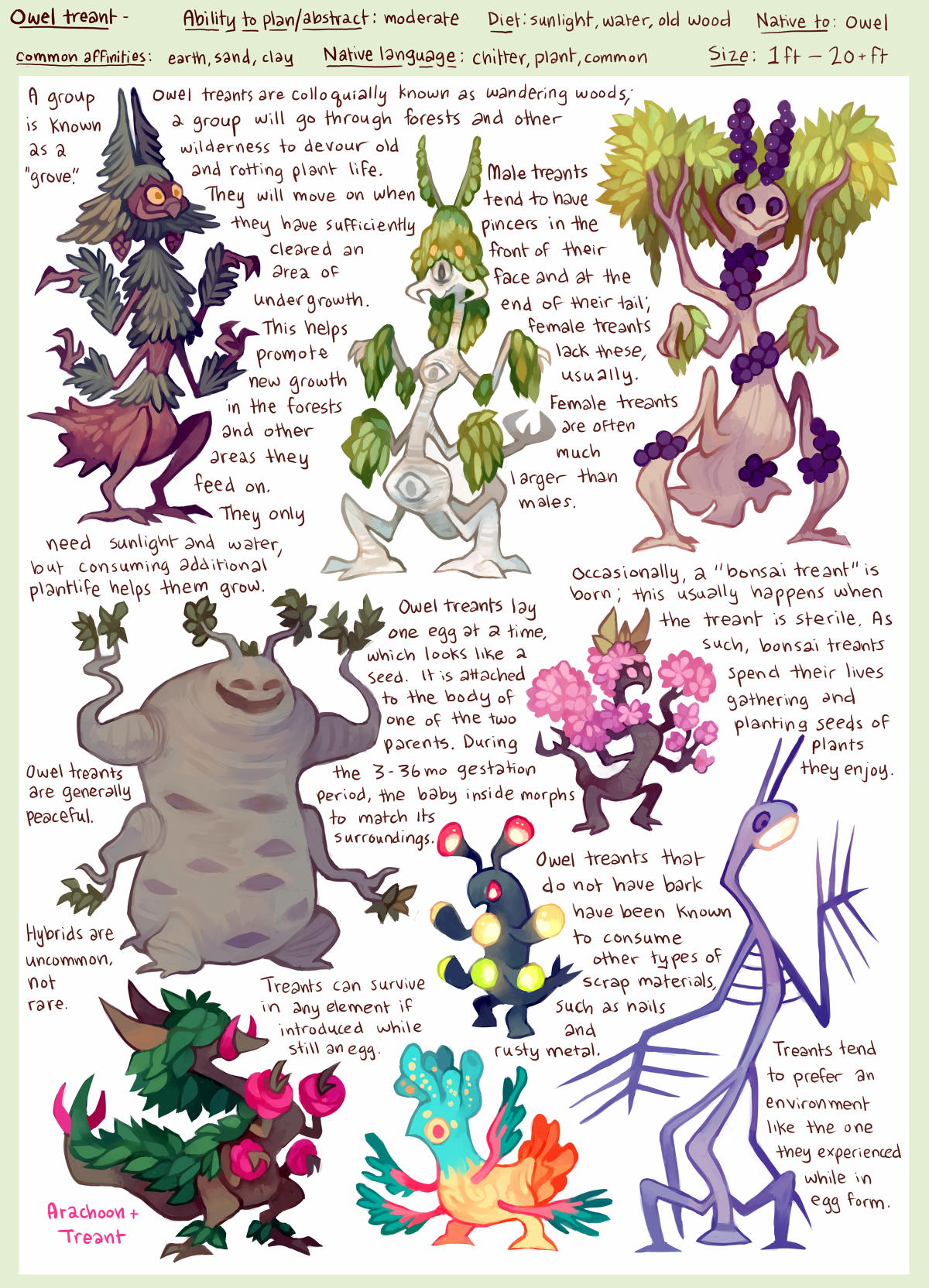 An Owel treant is a bug that tends to have a bark-like exterior and foliage that matches. They usually clear out undergrowth and dead forest, though ones with different exteriors may have a different diet to suit their body's growth and maintenance.

Language: Chitter and Plant, with many opting to learn Common

Climate preference: Varies depending on foliage and exterior

Affinities: Earth, Clay, and Sand are the most common.

Weaknesses: Fire and Poison. Extreme heat tends to damage treants with bark and foliage, and forest fires have been known to kill large groves. Wherever burns have ravaged a treant's body, new growth will not arise. They also have little means to fight off poisoning; those that do survive toxins often are rendered sterile and incapable of new foliage or bark growth.

Resistances: Water, Earth, Air, and Ice. Owel treants are heavily resistant to what nature throws at them, though older treants tend to lose these resistances as they age.

Abilities: Owel treants tend to be very good at camouflage and hiding, and as such, their abilities are often defensive and arise from wishing to avoid conflict.

Owel treants produce a single egg at a time from breeding, which is attached with sap to whichever parent can guard it best. The egg will not hatch until the egg senses the conditions are right to emerge. During this time, the environment's influence on the eggs is very strong, and the treant inside will grow and change to match its surroundings. If the parent housing the egg travels through a lot of environments at this time, the child within will end up emerging with a strange mash up of foliage and bark. This often results in a bonsai child, as well. As a result, this is less than desirable, because groves tend to only want treants that will match their own foliage enough. This means that most parents won't leave a particular area while caring for an egg.

They only travel at night and have been known to confuse travelers who wake up in an empty clearing after having fallen asleep among the trees during the previous evening.

Each grove has a female leader; males often move from grove to grove to find new mates. Males will stay in a grove until the children they have fathered from that grove have all matured.

They have been known to be centuries old, though the average lifespan seems to be 150 years.

Owel treants that imitate fruit-bearing trees can produce their own fruit, but it tends to be sour to discourage critters from eating it. A treant with Acid as an affinity can better control the taste of these fruits.

Species originally found here and was produced as part of the Bug Species contest! Please do check out the original artwork by Whmseik and Ropnolc!