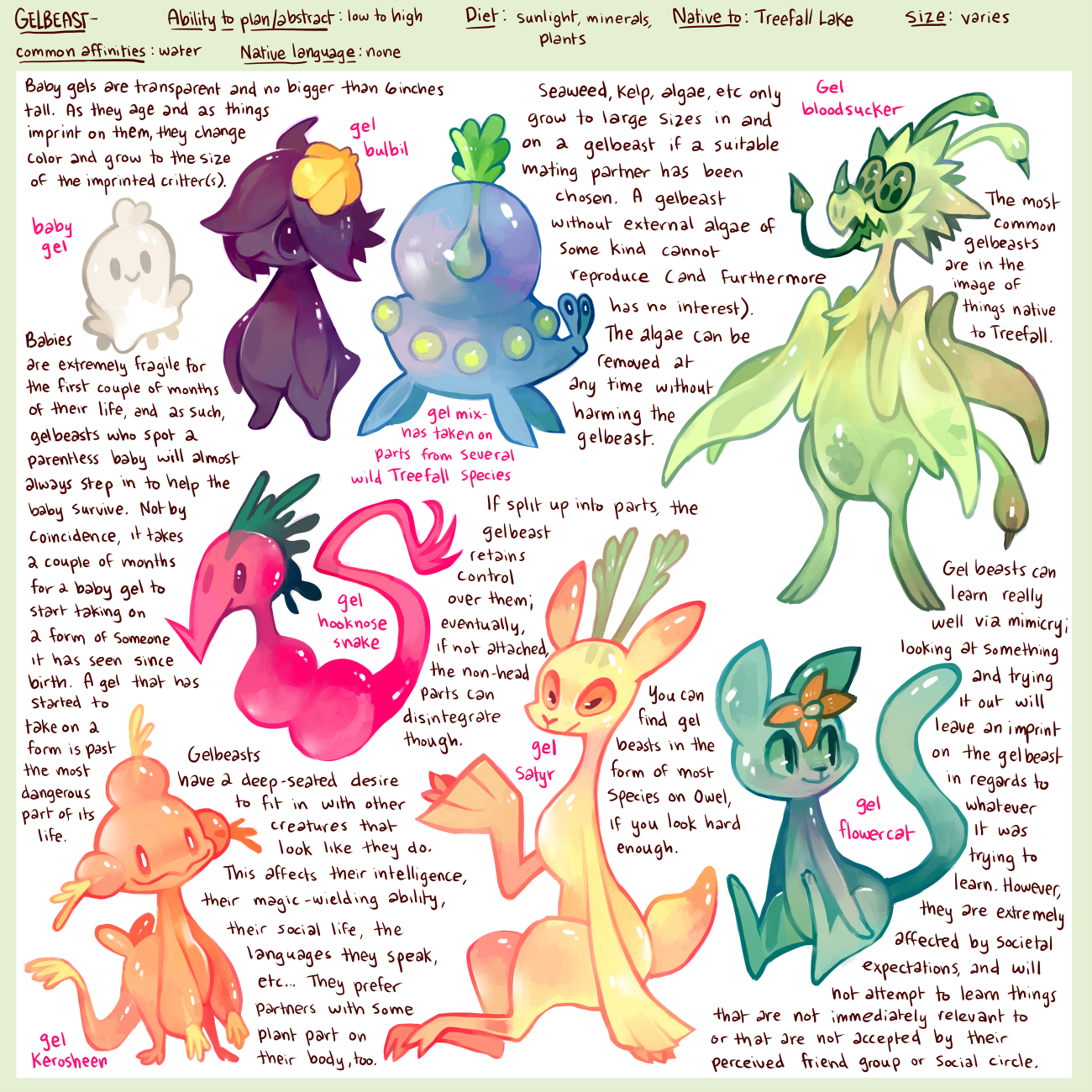 Thanks to exty for designing some of these!

A gelatinous, plant-based species that prefers to live near bodies of water. First thought to be simple gelatinous variations of the wildlife around Treefall, they have developed into much more intelligent creatures in recent decades, possibly due to Treefall natives’ tampering with the ecosystem.

Language: whatever language is common in the area; no native language

Ability to reason: very low to very high; influenced by parents, and reflected in the choice of imprint

Climate preference: temperate, though can survive most climates with enough sunlight and water

Found in: most remain in Treefall, but some can be found in any of the diverse cities on Owel

Affinities: Vast majority are Water. In rare cases, gelbeasts have sprouted in other types of liquid environment — mud, lava, etc. — which produces a very volatile creature of the appropriate type.

Gelbeasts who live in unusual environments or off of unusual nutrients may develop a secondary subtype. For example, a gelbeast living near a particularly gritty lake may adopt a Sand subtype.

Weaknesses: Gelbeasts are highly susceptible to magic of any type, in any form. They have almost no natural resistance to it.

Abilities: Most gelbeasts have limited shapeshifting abilities, allowing for small changes such as flattening feet into flippers for faster swimming. Only a small percentage are gifted enough to change their shape entirely.

Gelbeasts as a species have a particular knack for replication and purification. Developed abilities tend to fit these categories: e.g., understanding languages very easily, or purging food of disease.

Gelbeasts have no standard body shape. A newborn gelbeast generally imprints upon the first other creature of similar intelligence it sees (which may be another gelbeast), and grows into a similar shape.

Colors among gelbeasts vary wildly, and depend both on the parents’ colors and the nutrients the seed absorbed before sprouting. A gelbeast changing natural color after sprouting is extremely rare. Artificial bleaches and dyes, however, are not unheard of.

Being plants, gelbeasts don’t need either solid food or to breathe oxygen. They do need daily sunlight and large quantities of nutrient-rich water. Gelbeasts who live in developed areas can’t survive on tap water alone, which is far too pure — they must drink specially-treated water, eat plants, or rest in nutrient-rich soil for several hours per day. It’s possible for gelbeasts to eat meat and other foods, but those take some acclimating to, and the visible digestion is unpleasant for others.

Gelbeasts are remarkably resilient to physical injury. They have no individual organs to speak of, and no particular weak points. Even being split in two is only a mild inconvenience; both halves remain functional, and the gelbeast can either reattach or regrow the missing half.

Gelbeasts do not have genders, though they may imprint upon a creature with gendered features, and may choose to identify with a particular gender when living among other species.

When two (or occasionally more) gelbeasts become romantically attached, both will develop a denser “seed” inside themselves. If they wish to have offspring, they can combine their seeds into one and plant it in a lake bed or other suitable environment. If they instead choose to keep their seeds, kelp and other aquatic plants will eventually start to grow from them. Many couples pride themselves on having large plant growth, as a symbol of the longevity of their relationship.

It’s rare, but possible, for gelbeasts to produce offspring with other species that have plant components.