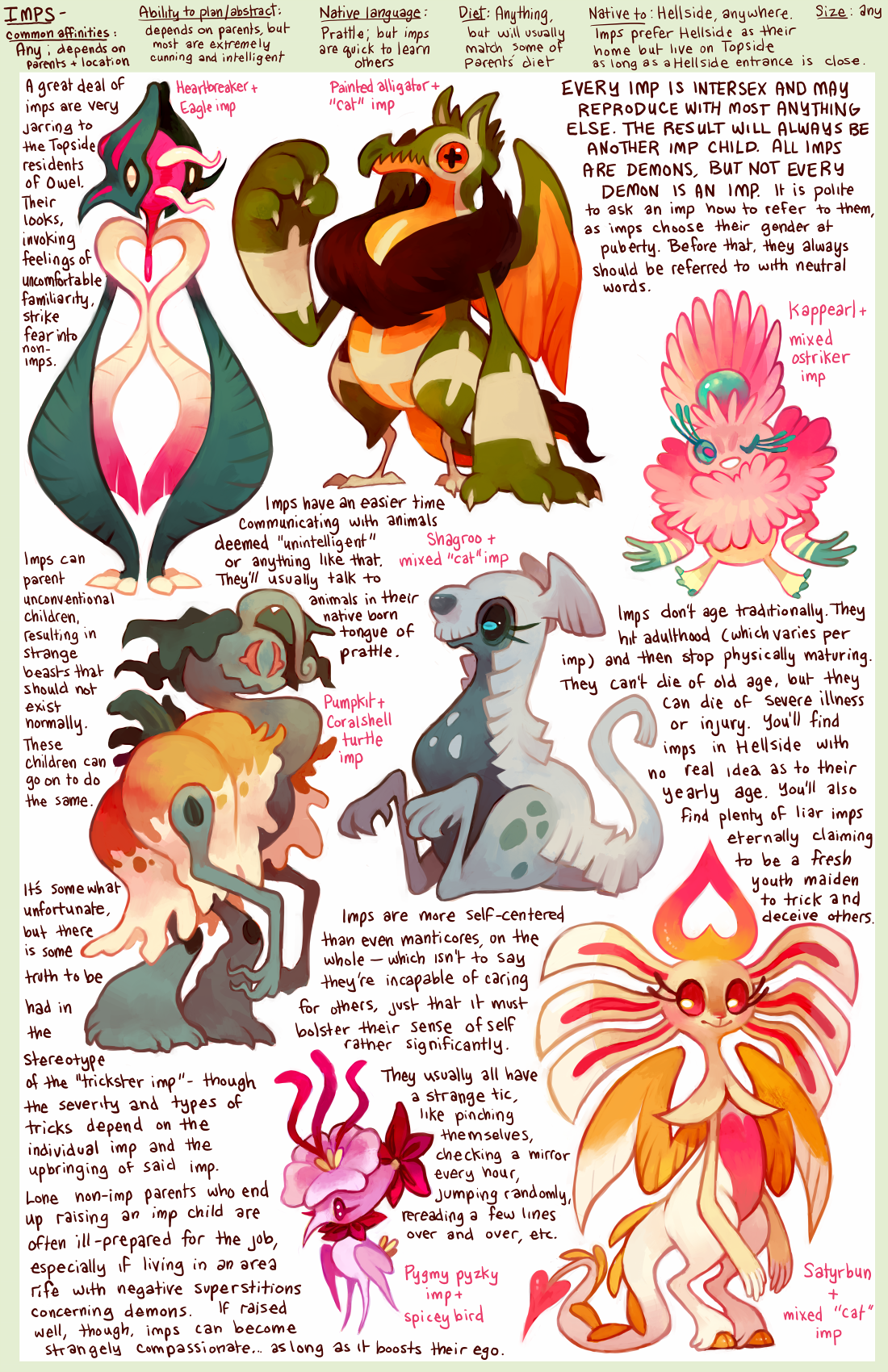 Important Notes from Kadath University! Read and understand before proceeding!

The defining difference between an “Imp” and a “Demon“ is that all Imps possess the ability to procreate with non-demon individuals, whereas Demons cannot.

Offspring with at least one Imp for a biological parent have always been Imps themselves, usually with physical features one could expect from a pairing of non-Imp, non-Demon parents.

The reason for sterility and/or the inability on behalf of Demons to produce Demon offspring is unknown, and comparing Imps to Demons in this area currently reveals no useful information.

To clarify: Imps are classified as Demons able to produce like-offspring with any physically viable individual. *

Imps of every primary and secondary element have been documented, with no apparent disposition or aptitude for any specific one. Favored elemental affinities do exist among certain Imp communities, but those are due to environmental influences.

One example can be seen in Polaris, as many Imps residing there possess affinities matching the elements most commonly found within the island.

Imps readily inherit affinities from each parent, with no element being favored over another, except in cases of environmental influence.

The previous example takes extreme environmental conditions into consideration. There is no reason the offspring would be unable to inherit both affinities instead of one.

Spirit: Imps in general are susceptible to the effects of Spirit, even more so if the element is mixed with the Imp’s own affinity. Reactions vary and are entirely dependent on the individual Imp.

PSI: If the Imps themselves do not possess PSI as an affinity, then they are susceptible to PSI. The most common detrimental effects are feelings of general annoyance, paranoia, and the inability to concentrate.

Varies: If not mixed with Spirit in a detrimental fashion, Imps are normally resistant to anything matching their own affinity. The level of resistance varies, but is usually high.

One should keep in mind that Imps are a relatively rare species and have no innate sense of community, and what is considered a large Imp population is not considered so for a more common race, such as the Commons Foxes.

Imps can be found all over Owel, but usually congregate near places of abundant elemental magic. Larger populations can be found in any location where Demons or entrances to Hellside are present.

Preferences vary, but are usually based on an Imp’s individual tastes and affinity. Areas devoid of magic, such as Mew York, are considered unfavorable by Imps.