◀ previous by date ◀ jump to Character Profiles
next ▶ 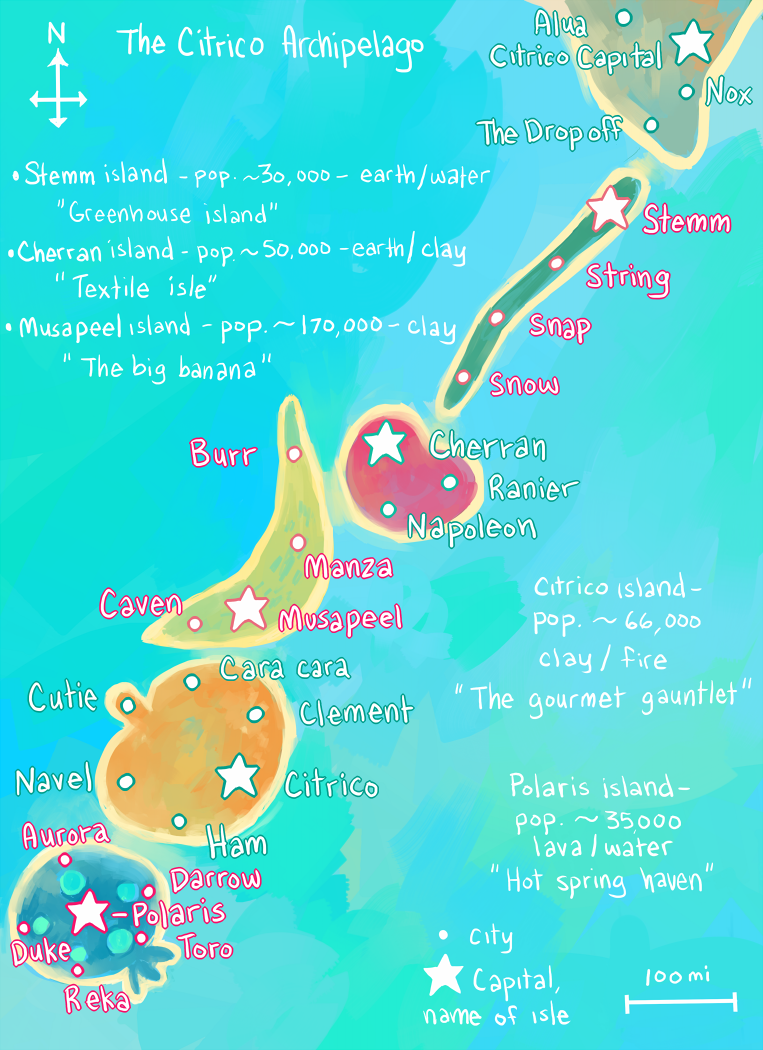 ◀ previous by date ◀ jump to Character Profiles
next ▶

The Island of Stemm

Stemm - Like the each of the other islands in the archipelago, this capital shares its name with the island itself. This city is a common destination for doctors and magicians with an interest in plants for medicinal and/or magic use. Stemm itself has many greenhouses and a huge variety of rare, exotic plants that are protected by strict laws. Permits are required to cut down 90% of the plant life here.

String, Snap, and Snow - these cities are rarely more than a passing point for tourists, as most arriving from the mainland will take public transit to the very edge so they can take a short ferry to Cherran. The areas surrounding String and Snap can be rather dangerous without a guide or someone who knows the plants and wildlife of the area. Snow is known for its strange, deep puddles that have ice at the bottom, despite the heat of the land above.

Cherran - Cherran is a land of dye and textiles. String and Snap works to harvest materials that can be made into fabrics, which are sold or traded to Cherran, who turn it into beautiful, vibrant clothing and accessories. There are small, multicolored ponds all throughout the island that the natives take advantage of. The best (most profitable) ponds are the deepest ones with natural magic creating pure pigments all the time. If a pond isn’t touched for a while, the color becomes more intense when used again.

Ranier and Napoleon - All of the best ponds have already been found and claimed (or so the natives want visitors to think). Settlements turned to cities, and so Ranier and Napoleon were established. They each augment their dyes with different indigenous wildlife.

Musapeel - The most settled and “civilized” of the islands, Musapeel is where you go to enjoy being a tourist while also still enjoying modern conveniences, such as News Meow and Instant Mail (you need to bring your Mew York, Kadath, Althar, etc InMail card with you though!). For the natives, Musapeel is the biggest hub outside of the mainland Citrico Capital. If you live on, for instance, Polaris or Citrico and need to send a message to someone in Kadath, you have to make the trip to Musapeel, as the other islands simply don’t have the same technology (or the want for it, yet.)

Burr, Caven, and Manza - You’ll find a lot of sculptors and trinket shops in these towns. Art’s celebrated here; painters in Burr enjoy a wide array of colors from Cherran, and sculptors flock to Manza to take advantage of the many kinds of clay naturally present (some even magical!). It’s not uncommon for painters and sculptors to team up with a native magic user from Caven to create tiny, colorful, moving sculptures. Tourists find them irresistible.

Citrico - Again, Citrico is the capital of Citrico Island, but it’s not Citrico Capital of the mainland. Nothing makes you stick out faster as a tourist than mixing the two up. The city of Citrico is highly acclaimed as the best gourmet dining spot. Chefs from all over the world travel to Citrico to take part in yearly competitions involving the wildlife of the islands. Killing or harming the animals without a permit results in steep fines and sometimes incarceration; only trained chefs are allowed to even apply for a permit pack. With a set of permits, a chef can employ a few helpers to harvest only specific creatures, and not more than the limit set forth by Citrico (which changes yearly depending on the populations of the wildlife).

Cutie, Cara Cara, Clement, Navel, and Ham - Each of these cities is known for different types of cooking and different flavors. You’ll also find varying wildlife depending on which city you’re near - which, not by coincidence, usually matches the chosen flavors of the nearest city. The city of Ham is known for savory flavors, Navel for bitter, Cutie for sweet, Clement for sour, and Cara Cara for salty.

The Island of Polaris

Polaris - Located around and on the mountain in the middle of the island, Polaris is especially known for its hot springs and beautiful ponds and lakes. This is a very popular tourist destination, as there are many nice hotels here built around hot springs that offer a light version of the gourmet dining experience on Citrico.

Aurora, Darrow, Toro, Duke, and Reka - These small towns are known for having many skilled fellows that take advantage of the potent magic lurking about the island in different forms. Darrow is known for forging, Toro for taming magical beasts, Reka for crystal magic development, Duke for theater and plays, and Aurora for having a large library. Each of the cities has a nearby lake which is named after the city -- Lake Darrow, for example.