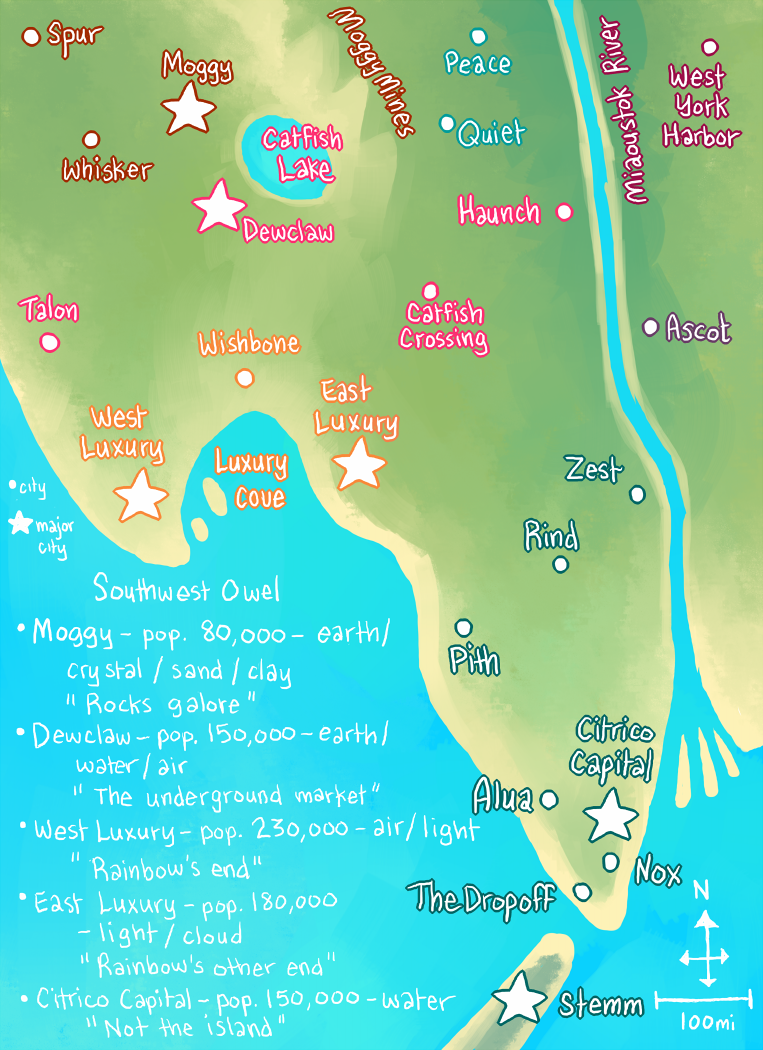 Moggy - Like Dewclaw, but further north and with more rocks. Its isolated location makes it an ideal choice for anyone wanting to disappear for a while. Or forever. Moggy doesn't care, really. As long as you pay your taxes and don't cause trouble, it won't ask questions. Most of its public services, such as law enforcement, firefighting, trash removal and wildlife preservation are community-run. Living here means you're volunteering for community service of some kind every year.

Spur - The mining and metal refinery industries are Spur's (and the entire region of Moggy's) primary sources of income. Spur supplies most every city in Southern Owel with their infrastructure materials, and at prices so reasonable you wouldn't even think they have a monopoly! But they do. Spur is responsible for minting Mew York's metal currency. It's allegedly responsible for Teslic Yard's weapons research and development... but that's just a rumor. Wholly unsubstantiated. Spur refutes it completely.

Whisker - This is the city for people who want to live a out in the forest somewhere, but don't want all the inconveniences that location normally comes with. Electricity, housing, indoor plumbing, but still surrounded by trees and hundreds of miles from any major city? Whisker's got you covered. This is made possible by mandatory donations from anyone exporting goods purchased from Dewclaw's underground bazaar. Those who mind a close inspection of their cargo tend to donate more generously than those who don't.

Dewclaw - On its surface, Dewclaw is a normal city. It enjoys some tourism from people traveling north from Luxury, and it exports fish and lumber. However its main industry is below the surface, in the underground bazaar. Have something you want to sell or buy? Go to Luxury, Citrico, or any of the other dozens of cities on Owel. Have something you want to sell or buy that you shouldn't be selling or buying? Come to Dewclaw. Stolen, dangerous, illegal, or unique items? Get or get rid of them here. You have to know where to look or who to ask, though. Dewclaw keeps up its law-abiding appearance very well.

Talon - Dewclaw's city by the sea. Supplies Luxury with food via advanced agricultural and farming programs. If Talon didn't exist, Luxury would go hungry in a month or two. All fish and game in this region are property of the citizens of Talon, and poachers are dealt with severely.

Peace and Quiet - Home to lush forests, fertile soil, calm and cool weather, AND ideally located. If it weren't for all the sinkholes, dozens of cities would be here. Attempts at building them have been made, certainly, but you wouldn't know it. Explorers who don't weigh much are the only ones who tend to travel here nowadays.

West York Harbor - Mew York's riverside city. It enjoys the same melting-pot-of-cultures atmosphere that the main city of Mew York does. Runs a covert anti-smuggling operation aimed at preventing illicit goods from being transported via the Miaoustok River.

West, East Luxury - The largest and most popular vacation destinations on Owel, by far. No matter your budget, these tropical paradises will sell you what you want, be it entertainment, relaxation, pampering or anything else. Famous actors and singers dream of performing here, and restaurants and casinos and basically everyone in the entertainment industry compete viciously to get a permit to conduct business here.

Wishbone, Luxury Cove - Can't spend money fast enough in East or West Luxury? Come to Wishbone! With the largest collection of high-end malls, shopping plazas and marketplaces on Owel, your money is sure to be gone in no time! If that isn't enough, Luxury Cove offers week-long cruises to Citrico Archipelago, and is home to Owel's only completely-underwater hotel. (Rated 5 stars out of 5 by several independent magazines.)

Zest, Rind, Pith - Legally, these are cities within the Citrico Archipelago, despite not being islands. Fairly normal cities for the most part. Not tropical or exciting at all. People like to live in them and claim they're from Citrico, which they technically are. They just aren't island-dwellers like most people will assume when they think of a Citrico citizen.

The Dropoff - Only open two times a year. If you like the idea of being dropped into a maelstrom from a thousand feet up with the intention of ending up in hell, come on over!

Stemm - Like each of the other islands in the archipelago, this capital shares its name with the island itself. This city is a common destination for doctors and magicians with an interest in plants for medicinal and/or magic use. Stemm itself has many greenhouses and a huge variety of rare, exotic plants that are protected by strict laws. Permits are required to cut down 90% of the plant life here.