◀ previous
next by date ▶ next in Tangle, Tussle, Tiger ▶ 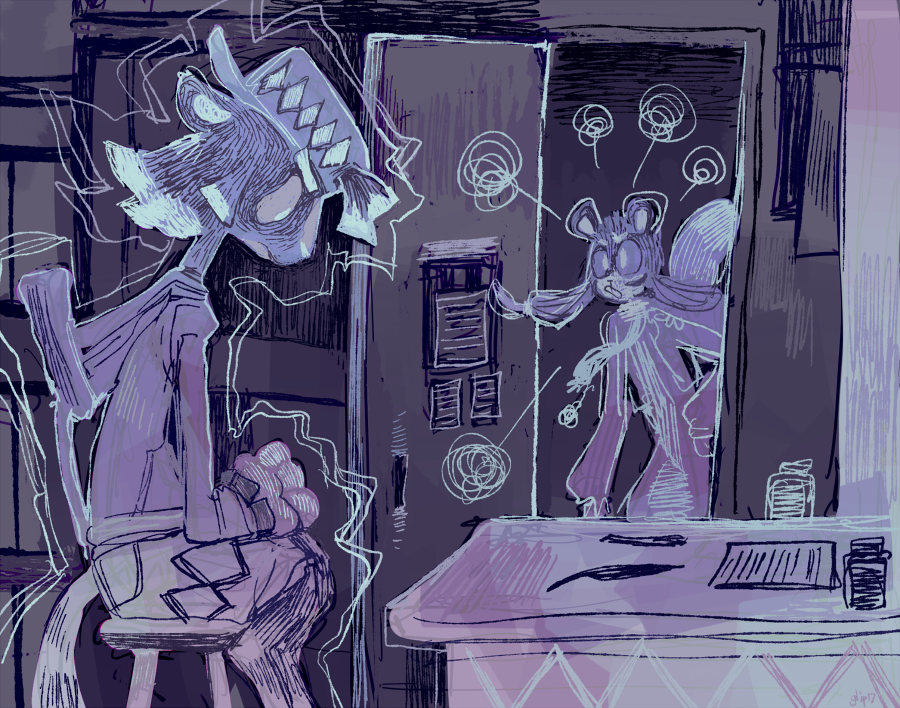 ◀ previous
next by date ▶ next in Tangle, Tussle, Tiger ▶

As she walked, she let ice form between the knuckles of her hands, repeatedly cracking it as soon as it had grown thick enough. The result was a rhythmic crack and a thin trail of something resembling snow left in her wake. It was a habit she had, when she was too upset to do anything else.

The scene replayed itself in her mind again. Why did I tell him about the tangle? Charthur could count on one hand the number of people who knew about the tangle, and even then, alcohol tended to be involved. Why. Him, of all people. Why couldn’t it have been anyone but him. As if he didn’t have enough ways of hurting me!!

There was a crack as Charthur crushed a particular solid piece of ice, and grabbed her hand where the pain was especially sharp. Stop that, said an inner voice, taking on Nim’s cadence. That’s enough.

A second voice added: If you keep that up, you won’t be able to write tonight.

This forced Charthur to stop in her tracks, briefly. Was she still planning on writing tonight? There was no point to it. There had never been, but especially not now. There wasn’t a single good reason to keep trying. More than that, she realized: there never had been.

Maybe that’s why I’ve been so eager to fight him, she thought. I needed someone to beat some sense into me.

She arrived home to a painfully jubilant Nim, holding a mug of tea in each hand. “Charthur! There you are!” He was beaming at her, pointedly ignoring the look on her face. “Incredible, so incredible! You’re the talk of the pack! Do you have any idea how many tigers have been by asking about your training sessions?”

Charthur just stared back at him. She had no emotions to spare on him. Nim, undeterred, pressed on, “Didn’t you hear how close it was? It came down to just Vivian and Kid Neon! Literally last tiger standing! What a war!”

Charthur continued to stare. She weakly held up two fingers, signing: Not now. She made a movement towards her room, forcing Nim to catch her by the arm. “Listen, you have to come out tonight, a war like that is one in million! Everyone’s buying a drink for the tiger who took them out.” The implication of this was not lost on Charthur. Nim gave her a wink. “My idea. No thanks necessary.”

Shame and rage flashed through Charthur’s gut. She flashed the sign again, more aggressively, then tried to pull her arm free, but Nim tightened his grip. “Charthur!” he shouted, before restraining himself. “Charthur. Char. Please.” Nim sighed. “Say you’ll come out tonight. Have a little fun. Socialize with the rest of the pack. Give yourself a break, for one night. That’s all I’m asking.”

Give yourself a break, she thought sarcastically, as if it were just that easy. She bit back a snarl, but managed to say, as amicably as she could, “Yes, fine. We’ll drink wine,” before wrenching her arm away and heading off toward her room. She shut the door behind her and leaned against it, shutting the rest of the world out.

Through the door, she could hear Nim shouting, exasperated, “Listen to me, Charthur! I’m giving you three hours to sulk, and then we're going out to have fun if I have to kick this door down and drag you to fun myself, do you hear me? Three hours!!”

Charthur looked around the room. Paper was scattered across every available surface. Some contained the malformed, hopeless beginnings of doomed poems. Others contained research notes — trite little turns of phrase, cloying little metaphors, lame and useless rhymes. They covered the floor, her bed, the desk, everything except the wall —

The wall. Staring back at her. The magazine covers. Soft, gentle Jasmaby. Soft, gentle, nice Jasmaby. Bullshit. Bullshit! What a fake, wretched, false idea. What a goddamn fucking lie.

Charthur lunged at them, growling, ripping them off in one swipe. She stormed over to the nearest wastebin, stuffed them down as far as they would go, and stomped them in further for good measure.

It was a start. She went to work on every other piece of paper lying about, compacting them into tight wads before cramming them, fistful after fistful into the trash. Occasionally she would glance at this one or that one, but each managed to be worse than the last. Useless. Terrible. Garbage! Not a single page held anything even remotely good. Garbage, all of it. All those wasted hours.

She let out a “ha!”, harshly, at the image of herself hunched over her desk, night after night, trading quill for pencil and back again, hunting through her thesaurus, starting and stopping and launching herself back into it, and for what? A waste of time! A waste of energy! All those late nights, feeling miserable the next morning, night after night, and not a single word of it was even remotely…

Wait, wait. What is this? When did I…

She suddenly recognized what she was holding. This… was the original poem. The first one she wrote. The one she had sketched out in pencil, on that first night. At the time, it had seemed too weak to use, but now… there was something in it… something she could see again. Something waiting to be rescued.

She hesitated. The garbage can beckoned. She could be rid of it. A flick of the wrist. She’d be free.

Time to find out what I’m made of.

The banging at her door continued. ”Charthur! I know you’re in there! Are you coming peacefully, or am I kicking this door down?”

Charthur forced herself to look at the page again. Nothing remained of the original poem — every single word had been erased and written over.

Nim pounded on her door again. ”You know I've got a kick like a mule, Charthur! This door doesn't stand a chance!!”

And with that poem went any sliver of the original sentiment. What remained was… trash. Worse than the previous trash. True trash. Juvenile, shallow trash. Every line, every phrase was painful to read; the combined effect was agonizing.

The pounding intensified. “Every tiger will be, uh, uh, drinking in binges! So say goodbye to your door, because I’m wrecking these hinges!!”

It was terrible. It was the single, worst poem Charthur had ever seen. She had done her absolute best, and somehow managed to end up creating the most unreadable lines of prose that she had ever penned.

"I hope you liked having a door, Charthur, because this! Is! My! Final! Warning!”, Nim shouted, slamming it more loudly with each word.

She had never had trouble translating her feelings into words on paper before. She thought of something she wanted to say; she wrote it down. The words on the page were the feelings in her head. Just like that.

“You asked for this, Charthur! You’ve got three seconds to open this door! One!”, Nim shouted, the door flying open as he threw his weight against it. He stumbled into the room, barely managing to avoid falling.

She turned to look at him. “I know you’ve knocked; the door was unlocked.”

Nim tugged at his shirt collar sheepishly. "Oh, I… just assumed you would've…” he shook his head, recovering. “Well, anyway. Time’s up. Can we go now, please? Are you done?"

Charthur looked back at the poem. Pathetic. That was it exactly.

Which could only mean one thing.

She had assumed that she was having trouble translating her feelings into words. That wasn’t it. The truth of the matter was that these were her true feelings: as pathetic and ridiculous as they read. She had, ultimately, succeeded in expressing them.

And now, pinned to the paper, her feelings could die.

Charthur gently slid the paper away from her, then folded her hands in her lap.

“Are you done?” Nim insisted.

There was drinking. Having something to drink gave her an excuse not to speak, so she drank. She managed to avoid Jasmaby and having to talk much and feeling anything other than empty inside.