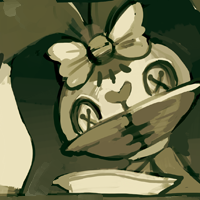 Sleta has been selling Equinox tickets for… hum. They can’t remember. It’s been a while, for certain. Their jokes are awful. Really awful. You probably can’t even tell their jokes were meant to be jokes.

Sleta took great joy in informing Min and Cress that the pair was far too late to take a dragon to the Drop-Off. Sleta took even more joy when they told the pair that they would not be entitled to a refund.