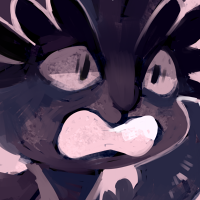 Friend of Diane. Both of them may act like jerks to Cayenne, but he probably (definitely) deserves it. As she’s not very good at forging she runs various errands for Lionel instead, like moving superheated liquids.

She and Diane trapped Cayenne using the stolen lava ore as bait and brought him before Lionel. They both wanted to see Cayenne get his comeuppance, but their efforts were thwarted when Calliope arrived and presented false testimony, which freed Cayenne.