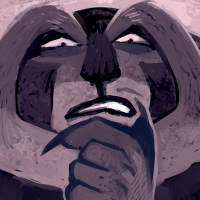 Sole crafter of artifacts for the Templar. Quick-tempered, violent, and cranky. Doesn't get much sleep.

As Cayenne described the lava ore for Cress and Min, Lionel is mentioned to be the only one who knows where it is.

After hearing a bogus story from Diane and Luisa, he decided to cut off Cayenne's dominant arm and fire him (in that order). After he was told of Cayenne's innocence, he instead sentenced Diane and Luisa to unpaid, mandatory overtime.