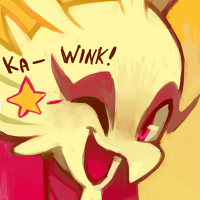 Larry leads his two little sisters, Pearly and Mo in conducting various scams. They're all banned from several small cities all throughout Owel. Hopes to one day make an honest living in Mew York.

Cayenne and Calliope found the trio selling junk merchandise to Mossadillos in Polaris. Larry repelled Cayenne's attempts to put a stop to it, and had him booted out.