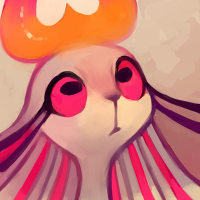 Her full title is Commander Furfur of The Blinds, though she doesn’t take her commander responsibilities too seriously. Fashion and treasure, on the other hand… those are right up her alley. Making Cayenne’s life difficult is also right up her alley.

Furfur was shown to be a terrible big sister. She had spied on Cayenne, saw him get caught and tried as a thief, and chose not to intervene on his behalf in order to save his arm.

Later on, she was mistaken for Cayenne by Cress and Min, and ended up making a deal with them to take them to Hellside in exchange for stories regarding their adventure over dinner.

Furfur, having chosen not to wait for Cress by the portal entrance, flew to her house with Min; Furfur figured Min alone would be an easy target to swindle.

Furfur attempted to seduce Min, but was cut short when an angel appeared and began to attack them. When Orobas, Amdusias and Beleth arrived to repel the angel, she flew off with Min’s bag of seeds.

Furfur almost has a clean get away with her newly aquired bag of treasure.

Furfur utilizes her troubleshooting skills and manages to gather nearly all of Beleth's cameras before they arrive. The two leave to gather the last when they run into a lovely specimen. To the best of her abilities, Furfur's interaction with the creature ends just as she planned, much to the despair of Cress and Min.