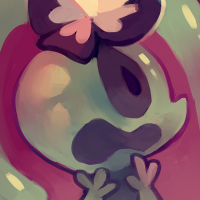 She often has to remind Min of their goal, but that's what friends are for, right?

Cress made a poor judgment call in assigning Min the duty of letting her know when it was time to head to the flight station for the Equinox Drop-Off, and they ended up missing it. When she offered to sail them to the Drop-Off, Min, being afraid of water, refused.

Cress ended up turning into a boat in order to sail to Polaris, where she thought the next-closest Hellside portal resided.

As Cress sailed onward to Polaris, she fell asleep and crashed into a rock. Cress managed to retrieve the bag of seeds that was thrown into the water, but upon realizing the bag had not been sealed, left the bag with Min and went inland in search of fresh water.

Cress encountered a Mossadillo, who informed her that they were on Polaris. There was a mix-up in communication between them, and Cress ended up violently assaulting the Mossadillo.

Some time later, Cress came back to Min, having succeeded in her duty to find fresh water, and together she and Min washed the seeds off and continued their journey.

Cress and Min met an imp named Cayenne, who offered to tell them where the local portal to Hellside was in exchange for knowledge of where he could find lava ore.

Cress appeared later holding one lava ore, and despite the obvious damage it caused her, managed to bring it all the way to Cayenne. She was then saved by Cayenne when he carried her to water and dropped her in it.

It was revealed that Cress and Min actually stole the lava ore from Lionel. Cress was able to slip between the bars, and being made of ice and water, was able to handle the ore long enough to bring it to Cayenne.

Cress implored Min to track Cayenne down in order to make him fulfill his part of the deal, and ended up accidentally tackling an imp Min mistook for Cayenne.

Cress was carried by the imp to the local Hellside portal, but due to her reluctance in jumping down a volcanic tunnel, became separated from Min.

Cress utilized the flower on her head to discern what Min was feeling, and when she realized Min was afraid, decided to head toward the large body of water in the distance.

Cress ended up in Spoke, where she meet a clover lamb by the name of Jam. They took her to a nearby Commander tent, where she recognized one of the symbols on their map as representing Furfur. She violently assaulted Onza and escaped the tent and made for Furfur.

Cress arrived in the middle of an angel attack on Furfur and Min, and fell prey herself to the angel. Before being consumed, she was rescued by Cat n' Fox and was reunited with Min.

Cress and Min remember who stole their seeds and enlist Beleth to help reclaim them from Furfur. Before they could form a plan however, Min flies off to find her seeds and Furfur by herself. Having seen Min fly away once again, Cress is overcome with emotion and takes it out on Beleth's dolls.

Cress and Min remember who stole their seeds and enlist Beleth to help reclaim them from Furfur. Things do not go according to plan and the seeds are harmed by the imp. Cress is once again taken over by their frustration and tries to harm the commanders but is stopped by Min.